I am a lexicographer; not a grammarian. I might get sometimes carried away in Wijesekera maze of cases, and forget to check my basic cheat sheets. So please, rely more on the lexicography, than on the grammar in my notes. No one is perfect.

Someone called "Sylvester" on prominent forums, might be the most knowledgeable person, as far as grammar is concerned. (His interpretations & intentions are his own, though).

“And what is the origin of suffering?

It is craving, which brings renewal of being, is accompanied by delight and lust, and delights in this and that; that is, craving for sensual pleasures , craving for being, and craving for non-being. This is called the origin of suffering.

“And what is the cessation of suffering?

It is the remainderless fading away and ceasing, the giving up, relinquishing, letting go, and rejecting of that same craving. This is called the cessation of suffering.

“And what is the way leading to the cessation of suffering?

It is just this Noble Eightfold Path; that is, right view…right concentration. This is called the way leading to the cessation of suffering.

"This is called ignorance, bhikkhu, and in this way one is immersed in ignorance."

Here, friend, the uninstructed worldling does not understand as it has come to be, the gratification, the danger, and the escape in the case of form, feeling (felt experience), perception, formations (synergies), and consciousness. This, friend, is called ignorance, and in this way one is immersed in ignorance.
SN 22.129

The abandoning both of sensual desires, & of unhappiness, the dispelling of sloth, the warding off of anxieties, equanimity-&-established citta purified, with inspection of phenomena swift in the forefront: That I call the ultimate knowledge of emancipation, the breaking open of ignorance.

Note that the above is the Theravada view.
The difference in the Agama, is that cittasaṅkhāroti is Saññā & Cetanā.

Consciousness is classified simply by the condition in dependence on which it arises.

There are two definitions of nāmarūpa. One in the Agamas (Chinese text), and one in the Nikayas (Pali text).

Indeed, the two definitions are complementary, as seen on this visual aid.

The Agama's definition is about the immaterial khandhas:

While the Nikayas give the following definition and extracts with parallels in the Agamas:

What are the six fields (of sensory experience) ?

Monks, these are the six fields of sensory experience.

“And what, bhikkhus, is the "all" ? The eye and forms, the ear and sounds, the nose and odours, the tongue and tastes, the body and tactile objects, the mind and mental phenomena. This is called the all.
SN 35.23

“And what, bhikkhus, is the dyad? The eye and forms, the ear and sounds, the nose and odours, the tongue and tastes, the body and tactile objects, the mind and mental phenomena. This is called the dyad.
SN 35.92

Dhamma, the directly visible Dhamma.’ In what way, venerable sir, is the Dhamma directly visible, immediate, inviting one to come and see, applicable, to be personally experienced by the wise?”

“Here, Upavaṇa, having seen a form with the eye, a bhikkhu experiences the form as well as lust for the form. He understands that lust for forms exists internally thus: ‘There is in me lust for forms internally.’ Since that is so, Upavaṇa, the Dhamma is directly visible, immediate, inviting one to come and see, applicable, to be personally experienced by the wise.
SN 35.70

“In this way, friend, it can be understood how the eye is not the fetter of forms nor forms the fetter of the eye, but rather the desire and lust that arise there in dependence on both is the fetter there. (ear, nose, tongue & mind).
SN 35.232

"Contact" is the transfer of the property (phassa) of the object's khandhas & dhatus to oneself.

It is not yet the appropriation (upādāna) per se; but the coming together of the two fields of sensory experiences (external & internal). It is an adjunction. The external is added to the internal, but it is not yet an essential part of the latter.

In Sanskrit, the root meaning of phassa (sparśa), has the following meaning:

"On account of name and matter is contact, with interest arising, there's seizing,
When interest is absent, there is no self love, when matter does not matter, contact does not 'touch'".
Snp 4.11

Contact as nutriment (support):
There are these four kinds of nutriment for the maintenance of beings that already have come to be and for the support of those seeking a new existence. What four?
They are physical food as nutriment, gross or subtle; contact as the second; mental volition as the third; and consciousness as the fourth.
SN 12.11

Feeling, perception, volition, contact and intelletualization with the mano -- these are called mentality (Nāma).
(Note that this is the Nikayas' definition of Nāma - The Agamas'definition is the five khandhas).
The way leading to the cessation of mentality-materiality (Nama-Rupa) is just this Noble Eightfold Path; that is, right view..., right establihment in citta.
MN9

How does the noble disciple protect the doors of mental contact?.
The noble disciple seeing a form with the eye will not take its attribute or characteristics. To him abiding with the mental faculty of the eye not protected, evil demerit of covetousness and displeasure may arise. To its control he falls.

Going along that path, I thoroughly recognized being, holding, craving, feelings, contacts, the six spheres, name and matter, consciousness.

Friend, it is said feeling? What is feeling?

When felt it is said feeling.

These feelings are felt.
MN43

"This, bhikkhus, the Tathagata understands. And he understands: "These standpoints, thus assumed and thus misapprehended, lead to such a future destination, to such a state in the world beyond."
He understands as well what transcends this, yet even that understanding he does not misapprehend. And because he is free from misapprehension, he has realized within himself the state of perfect peace. Having understood as they really are the origin and the passing away of feelings, their satisfaction, their unsatisfactoriness, and the escape from them, the Tathagata, bhikkhus, is emancipated through non-clinging.
DN 1

Overcoming neither perceptions nor non-perceptions to attain the cessation of perceptions and feelings This is the eighth direction.
MN137

And what is craving?

This is called craving.

I see the populace trembling, caught in the net of craving 'to be'
Not settled about craving to be and not to be, they cry when death comes.
Snp 4.2

The Blessed One said:
"I do not say that all recluses and brahmins are hemmed in birth and decay,
Those that give up views, hearsay, experiences and all other things,
And thoroughly knowing craving become desireless, are the ones that cross the floods"
Snp 5.8 (or 5.7)

The Blessed One said:
With delight the world's fettered.
With directed thought it is examined.
Through the abandoning of craving is there said to be Unbinding.
Nandisaṃyojano loko,
vitakkassa vicāraṇaṃ;
Taṇhāya vippahānena, nibbānaṃ iti vuccati.
Snp 5.14 (or 5.13)

Seeing people, victims of craving
aflame, overwhelmed with aging
then heedful, Pingiya, let go of craving
for the sake of no further becoming.
Snp 5.17 (or 5.16)

He has severed craving, thrown off the fetters, and -- through the right penetration of conceit -- has made an end of suffering & stress."
MN2

..when the bhikkhu, dispels craving pulls it out with the roots, makes it a palm stump, and makes it a thing that does not grow again, that bhikkhu is perfect. He is with desires destroyed, the holy life lived, done what should be done, the weight put down He has come to the highest good, with the bond "to be" destroyed He rightfully knowing, is released.
MN 72

(Note: Clinging (holding) has the underlying meaning of "appropriation")

And what is clinging/sustenance?
These four are clingings:
- sensuality clinging,
- view clinging,
- precept & practice clinging, and
- doctrine of self clinging.
This is called clinging.
SN 12.2

These are things of the self and are holdings, that mind without holdings is the mind's release.
MN106

To the wise there are no arranged views of being and non-being
They give up hypocrisy and measuring, not seizing go beyond.
Snp 4.3

Do not wish for the two extremities of being and non-being here, or hereafter,
Think discriminately about the Teaching and have no roosting places.
Snp 4.5
Paramatthaka

The sage knowing, that there is a dependent factor, examines it,
Those released knowing do not have a dispute, the wise have no association with being and non-being.
Snp 4.11

The very virtuous said, purity comes through restraint, observed the restraints
And said this is purity, The wise said it is 'being'.
Snp 4.13 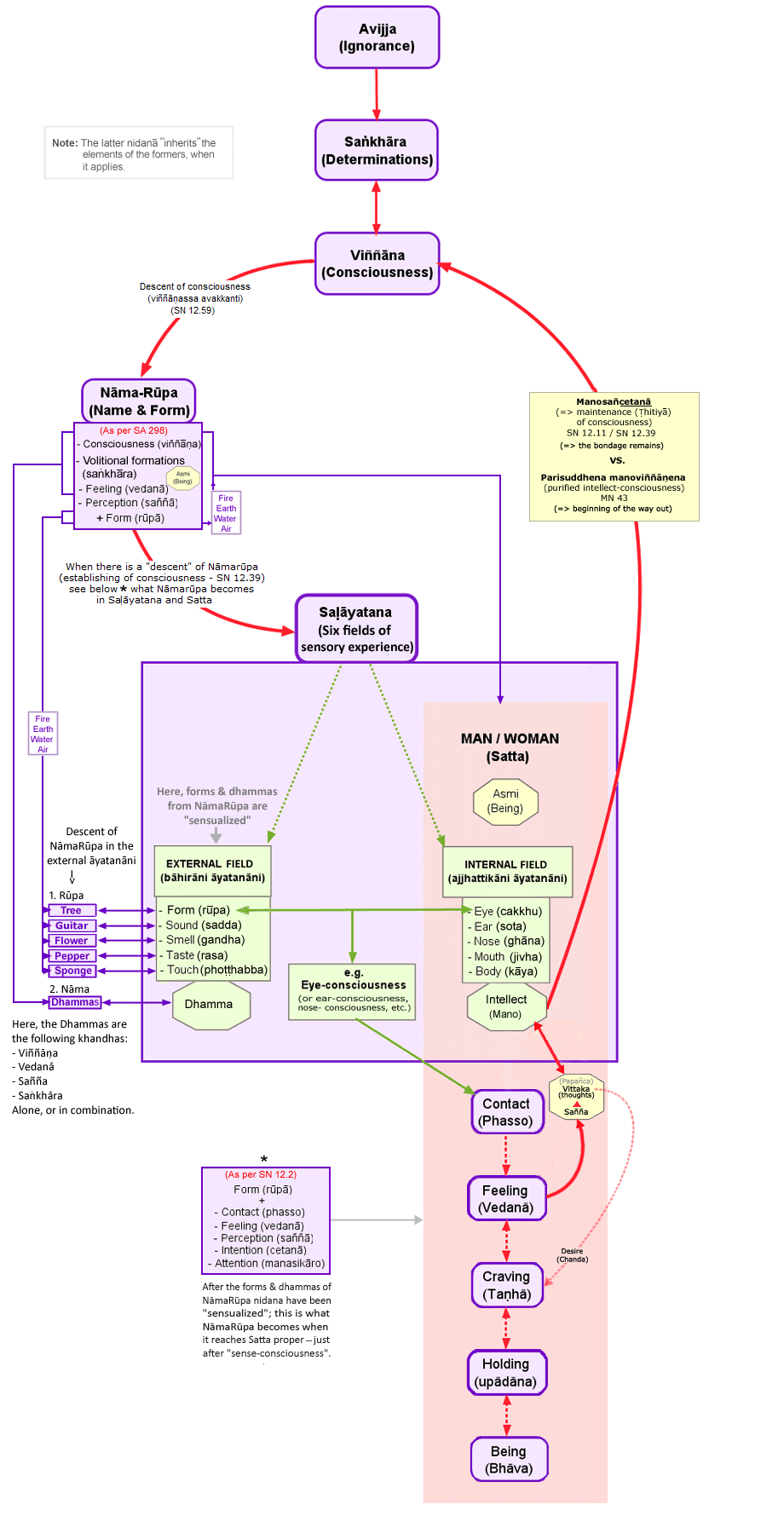 Understanding the establishing of consciousness might help understand the above sketch.

Bhūta (what have become) > Being (Bhāva)

Mindfulness(es) - Do them all cheat sheet.

Satipaṭṭhāna (The way to the acquisition [of citta]) - in the Saṃyutta

Ānāpānasati & Jhāna - side by side

Anicca  (Impermanent" AND/OR "not one's own")  New

- Sensory experience in echt Buddhism. (a must read)

- On the meaning of attaniyena (belonging to self - or - one's own self - or - non continuous self?)

- Upaniṣad. An example of the link between Buddhism and the post Vedic philosophy. (section 7)

- Why cittassa and not just citta.

- Consciousness turns back at Name & Form. (a must read)

- Nuancing the meaning of "viharati".

- Nekkhamma: Renunciation OR Inaction (as in "no further added kamma" ?  - not to be confounded with inactivity).

- The sequence of knowledge

- The Jain doctrine (by Colette Caillat)

- Knowledge in Jainism. (a must read)

- Yoga - The Aphorisms of Patanjali.

- The sequence of knowledge

- The proper way to nibbāna.

- Clearing up the notion of "transmigration" in pre-Buddhist Vedic litterature.

- Viññāṇā and the conundrum of duality.

- A note on "buddhist" forums.