Will the Chinese economy collapse?

Here’s what Western authorities have told us (can you see why China wants the right to censor Western media?):

1999. Bank of Canada: Likelihood of a hard landing for the Chinese economy.

2003. KWR International: how to find a soft landing. If China

2005. Nouriel Roubini: The Risk of a Hard Landing in China

2011: Business Insider: A Chinese Hard Landing May Be Closer Than You Think

2014. CNBC: A hard landing in China: The risks in one graphic

2015. Forbes: Congratulations, You Got Yourself A Chinese Hard Landing ….

The Chinese economy has been the only reliable, predictable economy on earth since 1975. It’s grown exponentially, exactly as the government predicted, year after year, for decades: 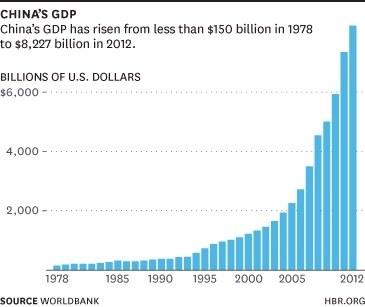 Our media coverage of China’s economy is very bit as toxic as the New York Times ‘Iraq Weapons of Mass Destruction’ propaganda. Ignore it.

P.S. I’ve been reading the same ‘predictions’ for 40 years, and the Financial Times’ Gideon Rachman has, too: “It is clearly true that China has enormous political and economic challenges ahead. Yet future instability is highly unlikely to derail the rise of China. Whatever the wishful thinking of some in the west, we are not suddenly going to wake up and discover that the Chinese miracle was, in fact, a mirage. My own scepticism about China is tempered by the knowledge that analysts in the west have been predicting the end of the Chinese boom almost since it began. In the mid-1990s, as the Asia editor of The Economist, I was perpetually running stories about the inherent instability of China – whether it was dire predictions about the fragility of the banking system, or reports of savage infighting at the top of the Communist party. In 2003, I purchased a much-acclaimed book, Gordon Chang’s, The Coming Collapse of China – which predicted that the Chinese miracle had five years to run, at most. So now, when I read that China’s banks are near collapse, that the countryside is in a ferment of unrest, that the cities are on the brink of environmental disaster and that the middle-classes are in revolt, I am tempted to yawn and turn the page. I really have heard it all before”.