What you need to know about Google algorithm spam actions

There are two types of Google penalties for websites: manual actions and algorithm actions. Why the type of penalty is important? Because it determines how to get rid of it.

Algorithm penalties, as indicated by their name, are applied automatically after detecting a violation of Google webmaster guidelines. Such situations are most likely to occur while using old, well known techniques such as content hiding or keyword stuffing.

Algorithm penalty can be removed in two ways: 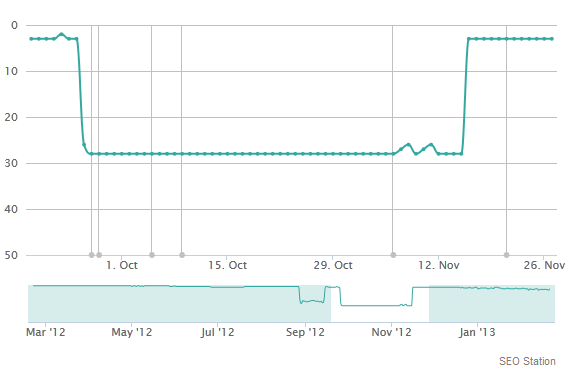 Above you can see a graphic representation of ranking changes of a web site. There was Panda Update 20 on the 27th September and Panda Update 22 on the 21st November. In the meantime EMD, Penguin and Top Heavy updates were applied. The dates of ranking highs and lows do not have to match the exact dates as Google can test new algorithms before introducing them globally.

According to information from Googlers, it is impossible to remove the algorithm penalty by requesting reconsideration. Bearing that in mind, it may still be worth submitting a request in order to establish what type of penalty has been applied. If a manual spam action is not mentioned in the reply, it means that the ranking decline has been caused by an automatic filter.

A list of Google updates from the last months may assist you with establishing the reason for an algorithm penalty application. You need to establish whether the dates of ranking declines match the dates of algorithm updates. However, it is worth noting that algorithm penalties can be applied during major updates and also during minor changes that do not receive much attention. For example, if rankings drop because of one of Panda updates, you should focus on provide high quality, unique articles on your website. In case of Top Heavy update, you'll know that you should work on displaying advertisements in less disturbing way for users, as this update lowers positions of websites that have lots of advertisement above the line.

Knowing that you can easily check the problem with your website and react as soon as possible in order to restore high rankings.