Waiter's Friend - How to use one

Not know how to open a bottle of wine? Feeling a bit silly hosting parties because you can't use a waiter's friend?

What is a waiter's friend?

A waiter's friend is merely a corkscrew, an intrument used for removing stopping corks from wine bottles. Generally, a waiter's friend consists of a pointed metallic helix, referred to as the "worm", which is attached to a handle. The user grips the handle and screws the metal point through the centre of the cork, entwining the cork and corkscrew so that moving one moves the other. A waiter's friend can also be referred to as a sommelier knife as it is shaped in a folding body similar to a pocket knife. An arm extends to brace against the lip of the bottle for leverage when removing the cork, this is known as the fulcrum. Some waiter's friends have two steps on the lever, and often also a bottle opener. A small hinged knife blade is housed in the handle end for removing the foil surrpounding the neck of many wine bottles. 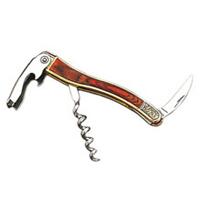 This waiter's friend from left to right shows the fulcrum, the work and the blade

How do I use a waiter's friend?

(If the wine bottle lacks a hood or foil covering its neck and cork, move on to the next paragraph.)
Firstly, remove the foil with the retractable knife. The safest way to do this is to open the blade and lay the handle on the palm-up hand across the base of the fingers, with the blade tip pointing in the same direction as and the blade edge pointing towards the outstretched thumb. Grip the handle firmly with the fingers, then turn the palm down and place the neck of the bottle between the thumb and the knife edge. The knife should be under the bottle's drip ridge. Squeeze the bottle neck with enough pressure to cut the foil and use the other hand to rotate the bottle one full turn. Use the point of the blade to separate and discard the cap from the remainder of the foil, which stays on the bottle. Finally, remember to close the blade! Plastic hoods usually require more pressure than tin or aluminum hoods and some wine bottles will have a pull-strip to assist in the hood's removal, although these don't always work.

To remove the cork, open the "worm". Although old wisdom says not to penetrate through the opposite end of the cork in order to avoid getting cork pieces in the wine, nevermind. Size does matter; so does sharpness. A long, sharp wire helix worm will neatly pierce even a dry cork without breaking off pieces and is guaranteed to grip and remove the cork whole.

Put the point of the worm in the centre of the cork. Do not worry too much about aligning the worm parallel to the bottle's neck. It is more important to get the worm centered on the cork. As the worm is turned into the cork in a clockwise direction, it will begin to right itself as it goes deeper. You need to stop when there is only one turn of the worm. Bend the handle-lever down to allow opening the fulcrum. Place the fulcrum's notch on the edge of the bottle and, on the hand gripping the bottle, use the index finger to hold the fulcrum to the bottle, you can use the other hand to lift the handle-lever and raise the cork about one-half inch. Turn the screw that last turn and finish lifting and removing the cork.

That's all there is to it... the next part's much easier, pour and enjoy!