Top 10 Gadgets Under $10 You Need in Your Kitchen

Author of the article has tried to focus on items that most people probably don’t yet own. Even the casual cook out there may lack a good number of these items. All of them are under $10, so they make perfect stocking stuffers or gift exchange items.

Author of the article has tried to focus on items that most people probably don’t yet own. Even the casual cook out there may lack a good number of these items. All of them are under $10, so they make perfect stocking stuffers or gift exchange items.

And now for something completely different… For a while now I’ve debated whether to change the format of my blog to include equal doses of web development and cooking. I can’t remember a time when I didn’t cook and virtually everything I know, I’ve taught myself or I’ve learned from watching Alton Brown on the Food Network. It’s a huge hobby of mine and, like web stuff, I’ve got a lot to say about it. However, for now, I think I’m going to keep the focus on web development and just add a dash of cooking from time-to-time.

My cooking blog debut is my Top 10 Gadgets Under $10 You Need in Your Kitchen. I’ve tried to focus on items that most people (of my generation, at least) probably don’t yet own. Even the casual cook out there may lack a good number of these items. All of them are under $10, so they make perfect stocking stuffers or gift exchange items. Or, if you’re like me and prefer to buy your own kitchen gear, you can pick up a couple and still be able to afford the rest of the crap you have to buy this month. 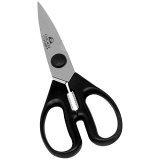 I might get some strange looks for telling people they ought to have a dedicated pair of scissors in the kitchen. But are you using the same crafting scissors used to cut wrapping paper for opening packages of raw chicken? And I hope you aren’t using your chef’s knife to cut off wire ties. If your knife set didn’t include a pair, buy some kitchen shears and tie it to your oven or a cabinet handle with a length of string. You’ll be less tempted to abuse your knives (and possibly injure yourself) when you’re in a hurry.

The scoop in one of the newest editions to my kitchen. When I say “scoop”, I mean the kind that you squeeze and a metal band slides under the product inside. If this list were solely about baking gadgets, a scoop would easily take the #2 spot behind parchment paper. Quite simply, if you ever bake cookies, you absolutely should have a scoop. It makes perfectly-sized cookies that bake more evenly and is about 10x easier than trying to wrestle batter onto the baking sheet with two spoons. I use a #20 (1/20th of a quart, generally sold as the “Large” size) which has a capacity of 3 tablespoons. If using a butter-based cookie recipe and I chill the batter before scooping, I find that it nets me cookies 3″ in diameter; which, in my opinion, is the perfect single-cookie portion.

Not to be relegated solely to cookie duty, the scoop also makes measuring out shortening much easier. Oh, and of course, don’t forget ice cream. 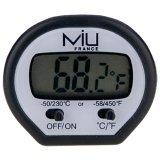 Not including my fridge thermometer (more on that later), I actually own no less than three kitchen thermometers: handheld probe (for the stove top), remote probe (oven), and one for deep frying/candy making. Of the bunch, the handheld probe makes my Top 10 list because a) it’s the cheapest and b) it get’s used the most. Digital’s the only way to go; they’re much more responsive and accurate than mechanical probe thermometers, and easier to read and more durable than the alcohol-filled, glass ones.

I’ve used my thermometer kind of like a set of training wheels to help remove guesswork when encountering new ingredients or cookware. By monitoring the heat situation, I know that my cast iron griddle, placed over medium heat on my front burner, will result in a burger cooked to 160°F (medium done) if cooked for 3m30s on each side. This assuming that I’m using a 5 oz., 4″x¾” patty composed of half sirloin and half chuck. Rare: 140°, Med-rare: 155°, Med: 160°, Well-done: 170°. However, I’ve found that ground buffalo burger (actually available for pretty cheap at Trader Joes) shouldn’t be cooked to more than 150°F because it’s so lean. It’s hard to know the temp by looking at it on the griddle though because it looks underdone. Chicken breasts are even harder to guess at, especially if baked, since they’re done at 165°F and if cooked much longer, begin to dry out. 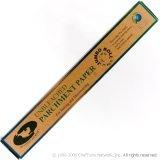 First, parchment paper is not wax paper. Wax paper is coated with, well, wax… and parchment paper is silicone-based. Wax melts at a low temperature, while silicone easily stands up to even the highest baking temperatures. If your cookie recipe doesn’t explicitly list wax as an ingredient, then it’s best not to coat the bottom of your baked goods with it.

Parchment paper is also better than simply greasing the baking sheet. Because cookies are so small, over-baking them by even a minute or two can dry them out and burn the bottoms. When a greased baking sheet is removed from the oven, the cookies have to firm up before they can be moved via spatula to a cooling rack. This extra wait time on a hot baking sheet can easily turn “perfectly baked” into “over-baked”. With the cookies on a piece of parchment paper, you can lift the whole piece of paper off the sheet as soon as they come out of the oven. 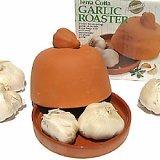 A garlic roaster is a garlic fanatic’s best friend. Place a few heads of garlic in the little terra cotta vessel and in about an hour you have the start of a perfect spread. It’s the only item on this list that’s used for a single purpose (what Alton would call a “uni-tasker”), but I’ve included it because it’s cheap, small (stores easy, can be used in a toaster oven), and works well. Roasted garlic is milder and sweeter than the stuff in your spaghetti sauce (but just as tasty). Mix in a little salt and softened butter to taste, and it’s the perfect addition to bread or crackers. Just be careful not to overcook the garlic; it goes from delicious to disgustingly bitter pretty quickly.

If you’re like me, you never grew up in a house with a whisk. Which is rather odd considering how often my mother cooked and even a top-of-the-line one hardly breaks the bank at only $8.00. Most people associate whisks with beating eggs and true, they’re quite handy for that task. In many cases, egg is added to recipes to act as an emulsifier (a binder between oil/fat and water). Beating an egg with a table fork, like my mother did, just doesn’t break up the yoke enough to make a decent emulsifier.

However, a whisk is far more talented than just eggs. Have you ever added spices to a sauce pan full of liquid and all of the powder just seems to glob together, no matter how much you stir? Put down that wooden spoon and reach for your whisk. You’ll be amazed at how much better it works.

Attempting to measure out honey, shortening, peanut butter, maple syrup, tomato paste, or any other viscous liquid using ordinary dry measure cups is next to impossible. At least 1/4 of the substance always seems to remain in the cup. The solution is these ingenious plunger measuring cups. Set the cylinder to the volume desired, fill, and then push up the bottom. The stuff pops out like toothpaste out of a tube. I understand that these have been around for decades, though I never knew they existed until Alton introduced me.

A mortar & pestle is probably quaintest item on the list. And it’s the least likely to be in your kitchen at the moment. Quite the shame too because it’s one of the most useful <$10 gadgets you can buy. And it's also almost certain to outlive even your grandchildren. Cracking pepper corns and coriander seeds, crushing sea salt, grinding nuts, mashing herbs, powdering chocolate. A mortar & pestle is like a mini-food processor--but 8x cheaper and a lot more fun to use. By buying your spices whole instead of pre-ground, they last longer, giving you tastier food and saving you money. Plus it just looks cool sitting on a window sill. (Also available in solid granite to up the coolness factor even further.) 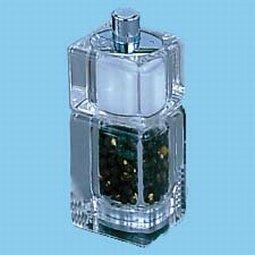 I hated black pepper growing up. It was musty, bland, sneeze-inducing and I never understood how it had earned a permanent place on the dinner table alongside the salt shaker. Fast-forward a few years and I bought a cheapo combination salt shaker mini-pepper mill at the grocery store on a whim. I was blown away by the difference in flavor. Freshly-ground pepper has a much more complex and inviting aroma than the stuff you also grew up with. From a mill, it regains its status as a spice rather than just a tabletop staple.

I’ve opted for the cheapest pepper mill on Amazon.com simply to accommodate my $10 limit. I actually own this mill, it was my first one, but you can get a much better, full-sized one for around $11 on Amazon. I’d recommend that you spent the extra buck. I currently use a spiffy mini-mill made of stainless steel and that operates with a plunger action.

I bought a refrigerator thermometer because my milk kept migrating to the back of the fridge, where it would promptly freeze into a solid white brick. Frustrated that the numbers 1-9 on the thermostat were absolutely meaningless, I decided to find out what the actual temp was inside my cheap fridge. After I did some reading, I found that a fridge’s temperature is actually more important than most people realize. “Cold enough to prevent spoilage, but not enough to freeze” isn’t good enough if you want to make sure your stuff lasts as long as possible

The ideal fridge temperature for meat is 35°F. Milk is happiest at 36°F. Like meat, asparagus prefers 35°F. Overall, your fridge should be set at 37°F. The problem is that right now yours is probably set somewhere between 32-45°F, but you have no clue as to the exact temperature. As an example, at 39°F your asparagus will last about 18 days, while at 37°F it’ll keep for 34 days. A difference of only two degrees doubles the shelf life. (cite) A $6 thermometer can save you some big bucks.