The Early History Of Batteries

Do you think batteries are a new thing? How long do you think they have been around? One hundred years? Two hundred? More?

Actually, believe it or not the oldest known battery dates back over 2,000 years! What the heck would someone have needed a battery for 2,000 years ago? This primitive battery found in the area now known as Iraq was discovered in 1936 and testing showed it could have produced up to two volts of electrical current. It is thought that the battery was used to electroplate gold onto silver. 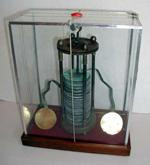 In the year 1800, Alessandro Volta made a battery using multiple layers of silver, paper, and cloth soaked in salt and zinc. The electrochemical series concept which ranks the potential produced when different metals come in contact with an electrolyte. This is where the term volts comes from.

This primitive battery was not good for delivering currents over long periods time. This led to the British researcher John Frederich Daniell developing a type of battery with a copper plate located at the bottom of a wide mouthed jar. A cast zinc piece commonly referred to as a crowfoot, because of its shape, was located at the top of the plate, hanging on the rim of the
jar.

Two electrolytes, or conducting liquids, were employed. A saturated copper sulphate solution covered the copper plate and extended halfway up the remaining distance toward the zinc piece. Then a zinc sulphate solution, a less dense liquid, was carefully poured in to float above the copper sulphate and immerse the zinc. As an alternative to zinc sulphate, magnesium sulphate or dilute sulphuric acid was sometimes used.

The Daniell Cell was also one of the first to incorporate mercury, by amalgamating it with the zinc anode to reduce corrosion when the batteries were not in use. We now know better than to put mercury into batteries. This battery, which produced about 1.1 volts, was used to power telegraphs, telephones, and even to ring doorbells in homes for over 100 years.

In the early 1900`s Thomas Edison developed the alkaline cell using iron and nickelic oxide. The electrolyte mixture used was potassium hydroxide which is the same used in nickel cadmium and alkaline batteries today. These batteries did well and lasted through being overcharged as well as remaining uncharged for extended periods of time.

In 1949 the alkaline-manganese battery known now as the alkaline battery was created at the Everyready Battery Company in Ohio. These batteries could supply more energy than its predecessors and further improvements have increased the energy storage capability.

Gregg Hall is a business consultant and author for many online and offline businesses and lives in Navarre Florida with his 16 year old son. See all the batteries available now at http://www.batteriesforallelectronics.com