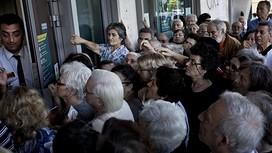 Greek banks are preparing contingency plans for a possible “bail-in” of depositors amid fears the country is heading for financial collapse, bankers and businesspeople with knowledge of the measures said on Friday.

The plans, which call for a “haircut” of at least 30 per cent on deposits above €8,000, sketch out an increasingly likely scenario for at least one bank, the sources said.

A Greek bail-in could resemble the rescue plan agreed by Cyprus in 2013, when customers’ funds were seized to shore up the banks, with a haircut imposed on uninsured deposits over €100,000.

It would be implemented as part of a recapitalisation of Greek banks that would be agreed with the country’s creditors — the European Commission, International Monetary Fund and European Central Bank.

“It [the haircut] would take place in the context of an overall restructuring of the bank sector once Greece is back in a bailout programme,” said one person following the issue. “This is not something that is going to happen immediately.”

Eurozone officials said no decision had been taken to wind up any Greek banks or initiate a bail-in of depositors, a process that would be started by the ECB declaring the banks insolvent or pulling emergency loans.

Greece’s banks have been closed since Monday, when capital controls were imposed to prevent a bank run following the leftwing Syriza-led government’s call for a referendum on a bailout plan it had earlier rejected. Greece’s highest court rejected an appeal by two citizens on Friday who had asked for the referendum to be declared unconstitutional.

Depositors can withdraw only €60 a day from bank ATM cash machines, while requests to transfer funds abroad have to be approved by a special finance ministry committee in co-operation with the Greek central bank.

Two senior Athens bankers said the country had only enough cash to keep ATMs supplied until the middle of next week. This followed the ECB’s decision this week not to increase Greece’s allocation of emergency liquidity assistance after the bailout programme ended on June 30.

The outcome of Sunday’s referendum will determine how quickly Greece wraps up a new bailout agreement with creditors, a top Greek banker said.

“The solvency of Greek banks is not currently an issue, but obviously the banks will be affected by how soon the country enters a new programme,” the same banker said.

Greek deposits are guaranteed up to €100,000, in line with EU banking directives, but the country’s deposit insurance fund amounts to only €3bn, which would not be enough to cover demand in case of a bank collapse.

With few deposits over €100,000 left in the banks after six months of capital flight, “it makes sense for the banks to consider imposing a haircut on small depositors as part of a recapitalisation. . . It could even be flagged as a one-off tax,” said one analyst.