- They talk about the presence of U.S & French troops within Misurata and Tripoli, and they are clearly admitting that foreign troops engaged in the attack & occupation of Tripoli, and are still there.

- A major conflict between the Misurata brigade and the NTC in Benghazi, about how the Misurata brigade is perceived by Benghazi, the minimizing of its role in the fights. The Misurati commander seems really tired of hearing the Military spokesman gloating on TV & in the news, talking about a so-called new National Army, while they are being crushed by Gaddafi troops, without the help of Benghazi. He says “Your So-called National Army has been totally crushed at Dafniya by Gaddafi troops, and they took all the weapons and armoured vehicles. There is no National Army anymore. Where is your National army in Sirte? Are you talking about those waiting outside parading for TV & photographs? A Commander like you should come to the battleground, not go parading on TV! Stop acting like the Americans & French, like Sarkozy parading while the war is still ongoing in the country. Come to the battleground! ”

- Ahmed Bani, The NTC’s Spokesman, answer him about the psychological operation & aims for his use of the word “New National Army”, he says that the whole world is fearing a guerrilla situation in Libya, fearing Al Qaeda and fratricide fights between the different factions. The international community must not see the Libyan rebels as a bunch of different factions, militias and brigades, so he uses the word “Libyan Army” to pretend that Libya is ok, that the situation is under control, and that there are only small pockets of pro-Gaddafi fighters to defeat. So they try to convince the US, UK and France that a Libyan army is under construction, blablabla...

- The Misurati commander stop him, telling him that the US & French are very well informed about the situation on the ground, since they are with them on the ground. They where in Tripoli during the assault, and they are still there. He says in his own brigade only, there is a foreign intel. group of 12 US spec ops, and 6 French (spies?), they are giving all the info, through internet & press (?). So the situation is quiet clear for them, no need to pretend there is a new Libyan army.

- A dispute over the weapons & “troops” or “mercenaries” from Qatar. “Where are the weapons from Qatar, where are the troops when we need them?”, says the Misurati rebel. The deficiency of backing troops and weapons from Benghazi, while they have given them 150 millions (?) for it- The Misurati commander says that they didn’t get the weapons they were promised while they know they are in Benghazi. He swears that each of those in Benghazi who betrayed the Misurata brigade will pay the hard price and that the ‘revolution’ will succeed with or without them. He says that even if colonel Bani pretend he didn’t betrayed, he need to fix the situation, and give what they promised to Misurata brigade, as he’s in power.

- The Misurati commander says that Benghazi owe them money and respect for the Misurata ‘martyrs’, the wounded and amputations (?),  for all what they have done, including destroying the Gaddafi army in Misurata and areas “ Think about the armies we destroyed, Man, we destroyed 16 battalions in Misurata, there are MASS GRAVES of Gaddafi soldiers, but we are not supposed to talk about it. Who destroyed them? And you are talking about a National army?! Where is your National army of Benghazi? We are taking major casualties right now. Ambulances and planes are full of our casualties; hospitals are full of Misuratan rebels! Where is the help coming from Qatar? Where are the weapons coming from Qatar? You guys are excluding us from Libya like if we were Bangladesh. You are doing worse than Gaddafi, forgetting us and putting us apart” 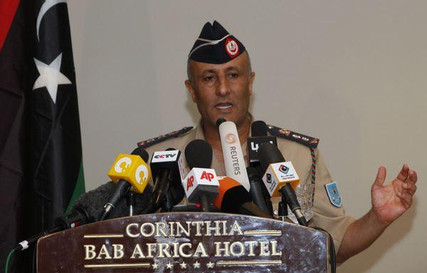