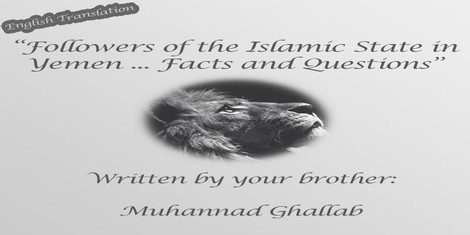 In the name of Allah the Merciful and Compassionate

“The Followers of “The Caliphate” in Yemen … Facts and Questions”

Less than 8 months have passed since the announcement of Abu Bakr al Baghdadi, the Emir of the group “The Islamic State,” from the Masjid al Kabir in the Iraqi city of Mosul, of “The Caliphate” calling on Muslims in the entire world for their allegiance to him as the Caliph for them.

In nearly half of that period there has been the announcement of a number of members and mujahid groups in some of the Muslim countries of their allegiance to the new Caliphate, who accepted their allegiance on the differences and included in conditions, these members and those groups in terms of weakness and strength in reality which they announced themselves, and thus what followed was the erosion or the real presence for them in which they could translate it on the ground through military work which is the goal and gain of establishing mujahid groups for the sake of the deen and fighting His enemies.

And the stark truth which two of the wise do not differ is that all of those entities – whether new among them or seeking to improve like you say – its reality remains very far from the reality and meaning of the large name which presented itself through the world and is not “The Caliphate.” And that the military strategy for the group did not differ from the other strategies from the mujahid groups old and new, which lived and lives the same reality; whether in the Iraqi and Shami ocean characterized by the same in open paramilitary war, as was the case and still is in all of Khurasan and Somalia, and before in less than the 3 past years in Yemen, or among the ‘states’ of the Caliphate in North Africa and the Arabian Peninsula and the Caucasus and Khurasan, which pursues mostly a guerilla style of war. And both strategies, the paramilitary war and the guerilla style war, determines the choosing of one of them without the other with taking into account multiple considerations, among them like the military power and the spite and the nature of the land and so forth, as it is known in the military science.

The purpose of this article is not to comprehend the reality show of those groups which are active in raising the banner of jihad in a number of countries around the world under the title of ‘the Caliphate,’ but rather the aim is to highlight a number of facts about the state of the group ‘Wilayat al Yemen’ belonging to the Caliphate in the land of faith and wisdom (Yemen) from where the followed strategy since the beginning of its announcement until now. And the author of the discussion article chose “Wilayat al Yemen” with his consideration of the livelihood of the jihadist reality in Yemen unlike other regions which announced “The Caliph al Baghdadi” accepted its pledge of allegiance for it, and it is reality maybe one person knows about him some aspects and absent of other aspects, most of it as a result of a lack of presence in this arena or that.

And it is my right to question – as it also asks others – about a number of facts not logically explained and the followers of the “Islamic State” in Yemen see it as the eye of reality, and what I lay out for example but not limited to the following questions:

Some may disagree and others agree with the above posed facts and questions; although the certain truth is that all of it puts the Islamic State in Yemen at a level far from what its followers claim that it is on the truth of the “Possible Caliphate” or even the “Phenomenon State” at the very least.

Soldier in al Qa’ida in the Arabian Peninsula