How do laser printers work?

Now that they're widely available at low prices, many people are choosing laser printers over inkjets. But did you know that they work very differently to inkjet models? 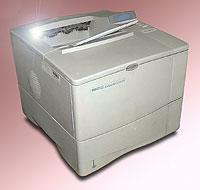 When they first became commercially widespread in the 1980s, laser printers were horrendously expensive. Nowdays they're mindbogglingly cheap- and it's impressive that these wonders of technology can be produced so inexpensively.

Though they're becoming popular as an alternative to inkjet printers, they work in a very different way. Read on to find out how!

There are four or five basic stages in a laser printer.

Before the image can be printed, it has to be converted into a grid of dots known as a raster or a bitmap image. This can be done by a processor inside the printer itself or by a program in a PC's operating system.

Laser printers are designed around a drum that rotates. Firstly a corona wire (or other mechanism) is used to give the entire surface of the drum a uniform negative charge of around -600 volts.

Here's where the "laser" in laser printer comes in. As the drum spins, the laser beam is moved in a pattern that traces horizontal lines on the drum's surface. If the laser beam is shining when it's over a certain part of the drum, the charge there is neutralised. If it's not shining, then nothing happens.

Stage 2 - Toner Sticks to Uncharged Parts of the Drum

Laser toner consists of a mixture of plastic resin (which isn't conductive on its own) which is combined with another material so that the toner mixture is conductive.

At this point the drum has a "real" visible image and we can see our final picture on it.

As the paper moves against the drum, the toner comes off the drum and sticks to the paper. We're almost done...

At this point, the toner image has been transferred from the drum onto the paper. However, the toner is still a powder, and comes off easily.

To make the toner stick permanently, the paper is passed through a heated roller (a "fuser") that melts the toner powder onto the paper. This is why the paper is usually warm (or even hot!) when it comes out of a laser printer.

Now your printout is ready, and that's how your laser printer works!

Some so-called "laser" printers are actually LED printers, because they use a row of LED lights (which are turned on and off in the appropriate pattern as the drum passes them) instead of a scanning laser. That aside, the end result is basically the same.

Graeme Findlater is Technical Support Manager for www.diskdepot.co.uk, one of the UK's leading suppliers of laser toner, inkjet ink, DVDs, CDs and other disc media, as well as computer accessories. For more information on Disk Depot, visit www.diskdepot.co.uk