Gold: Much Different Than You Think

After reading this article you really will know more than most people about one of our most precious minerals. It has some interesting stuff.

After reading this article you really will know more than most people about one of our most precious minerals. It has some interesting stuff.

Gold doesn't do much, it just sits there looking pretty. Not its beauty so much as its inertness gives gold a large part of the value we place on the mineral. 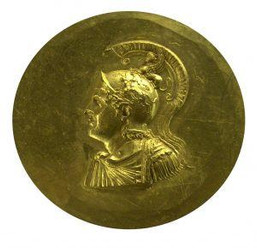 Gold isn't unique to earth by any means. Our moon, which in the early days after formation of our planet was smashed off it and hardened to become a satellite of its mom, is expected to have large gold deposits.

In 1999, the NEAR spacecraft showed that the asteroid Eros holds more gold than has ever been mined on earth. It's a bit out of reach so far.

The largest deposits of gold on our own planet--estimated around ten billion tons of it--are in the rock beneath our oceans. However, no one has yet figured out a way to get that gold out cheaply.

Archeologists believe that gold may have been the first mineral ever mined on earth. Decorative gold pieces have been found in Bulgaria that date back 6000 years, roughly the same time period as the Stone Age.

Going back to the seventh century BCE, gold wire was used to attach fake teeth to those who could afford it. Gold fillings for teeth date back at least to the 16th century, likely to ancient Egypt.

The Inca Empire had one of the largest collections of gold known. When King Atahualpa promised to fill a room 22 feet by 18 feet and as high as he could reach with gold as a ransom to his Spanish captors, they accepted. The Spanish got the gold, but killed the king anyway.

Gold mining got started in the United States after Conrad Reed found a lump of it on his father's North Carolina farm in 1799. The family used the 17 pound lump as a doorstop for three years before a local jeweler spotted it and gave the Reeds $3.50 for it, about one-thousandth of its undefined value.

Conrad caught on--the lump would be valued around $100,000 today--and decided to begin the first gold mine in the US.

Despite the claim made in the old James Bond thriller Goldfinger that covering a body could cause death through "skin suffocation," it's not undefined. Actress Shirley Eaton had everything but a small section on her abdomen covered with gold paint. Viewers didn't see the bare patch, but sight of the rest of her covered in gold spurred the imaginations of many young men.

Gold can be pounded to a sheet five millionths of an inch thick. One ounce of it has been drawn into gold wire 50 miles (80 km) long and five micrometers thick, one-tenth the diameter of a human hair.

Because it's virtually indestructible, it's estimated that 80 percent of the gold ever mined is still being used.

Gold has been used to wrap around the Apollo lunar lander and as eye protection on the visor shields of astronauts. It's used as a treatment for rheumatoid arthritis, via injection. Doctors don't understand yet why it provides an anti-inflammatory effect.

Alchemy is the name given to the study of how to change base metals into gold. Though alchemists from the days of Shakespeare on failed to produce gold, the Soviets actually created it from lead in one of their nuclear reactors. Sort of. Using radiation, they were able to transform lead nuclei into gold. Too costly for too little of the precious metal though.

Though the mining of gold impacts the environment badly by sending cyanide into waterways and nitrogen and sulphur dioxide into the air, the final product is environmentally green. Thin gold sheets cover the windows of some office and apartment buildings to reflect the sun's heat in summer and hold heat inside in winter. That's why the glass seems to be gold coloured.

Australian researchers have found microorganisms that actually consume trace amounts of gold, then poop it back out as larger nuggets. Mining companies want to use the method to replace cyanide.

The USA has the world's largest hoard of gold bricks, but India has the largest amount of gold because of its many decorative uses. About 20 percent of finished gold around today is used as decorative thread in Indian saris.

At this point, finding new sources of gold takes enormous resources. Asteroids, the moon and the ocean floor are too costly to mine. And Indian ladies are decidedly reluctant to be de-frocked just to produce more gold trinkets.

If only someone had thought to ask Goldfinger how he accumulated his gold fortune.

Turning It Around: Causes and Cures for Today's Epidemic Social Problems, a book for adults to learn how their problems of today began and how to help their children avoid having the same or other life problems. Learn more at http://billallin.com