Defense against the Dark Internet Arts

Schoolyards have bullies; sports teams and military units have hazing devotees and towel snappers.  One of the great recreations of humankind is tormenting other humankind.  Thus, the internet, with its partial veil of anonymity, has trolls, many trolls, many kinds of trolls.  Trolls are mean, nasty.  Their currency is sadistic glee, known on the internet as ‘lulz.’ Some are apolitical and do the work purely for the joy of daily torment; their glee can be deposited in the psychological bank as a feeling of superiority.  Others do it partly for political purposes, trying to move their superiority beyond the mental plane, and making a concerted effort to move inconvenient people and their priorities out of the way.  Trolls terrorize the gullible and the easily offended; sometimes, they manifest on the ground to shout at houses and throw things, but usually, they sit alone and type.  They are a psy-op, a malicious military, a thoughtcrime Mafia – yet, they are mostly passive consumers of fantasy, and their troll life gives them their principal sense of being in control.  To be a troll is to be a warrior, laying waste to the vulnerable while receiving only bleats, swearwords and account suspensions as personal injuries.

The powerlessness of trolls in reality has caused them to discover the two tools that allow them to cause real mayhem in the lives of others.  The first and weaker of the two is schoolyard atavism – they and their targets are adults, but by hurling the insults and sly challenges pioneered by the schoolyard bully, they remind the target that he or she was ineffective against bullies as a child.  This humiliation lives on into adult life.

The second and stronger of the two tools is witchcraft.  Trolls use all four of the major kinds of spin shock involved in effective, purely psychological cursing (no spirits needed): downspun prediction for the targets (“your group will lose out”), upspun prediction for their own imaginary group (“we superiors will overwhelm you”), downspun characterization for the targets (“you’re a tramp no one cares about”) and upspun characterization for themselves (“I have intelligence you can’t dream of”).  Also, like all negative shamans, trolls collect ‘dirt’ against their targets. Traditional cursers try to collect fingernail clippings or hair to link long-distance curses psychologically to their targets, perhaps even making the proverbial voodoo dolls with the target’s ‘dirt’ stuffed inside.  Modern trolls look for ‘dirt’ in the form of moments of embarrassment that can then be relentlessly used to unnerve the target (“you fainted on the campaign bus and that shows you’re too weak and old to be elected.”)  Ultimately, trolls seek symbols of the target’s weakness and use these symbols as a sort of tenderizing enzyme to soften the targets for attack.

It’s no accident that political bullying of minorities begins as false accusations and culminates as a witch-hunt, where the targets eventually receive real (though materially false) allegations of supernatural misdoings.  Trolling is social witchcraft, and its spin techniques include projecting its own clouding of reality onto its targets.

Based on Twitter experience, I’ve noticed that there are 15 clichés that serve as the building blocks of almost all trolling online today.  Many of these clichés have ancient pedigrees and exist in all schoolyard bullying and bad politics.  I am not going to say much about the historical aspects. I will mainly list the troll clichés as they’re seen online.

The ascent of Donald Trump to the U.S. presidency shows that trolling, dexterously executed, can attain enormous power.  Much of the U.S. media’s attention in recent times has been absorbed by fact-finding about the President’s prodigious slew of entropic assertions, with truth values ranging from awkward to outlandishly ridiculous to weirdly implausible.  Trump’s online fan club lulzes voluptuously along with him, eagerly repeating entropic assertions like ‘Mexicans are rapists,” “Hillary is a criminal” and “Obama bugged my premises.” The actual factuality is irrelevant.  This is a group troll moment, and its participants are rolling in sadistic glee as their leader issues one false accusation after another.

If you don’t like it, you crying fuck, kill yourself.

(warning: some bad words and insults in the text, because that's part of what it's all about).

The purpose of this compendium is to help people realize that these trolling efforts are just mindless cliches that need not cause distress.

2.  The Waaaawaaa, 'crying' or 'emotionally out of control' cliche

3. The Death curse (including both the direct threat and the magical threat seen below)

4.  The grotty curse cliche.  There are as many variations as there are ways of playing with spit or blood or poo. 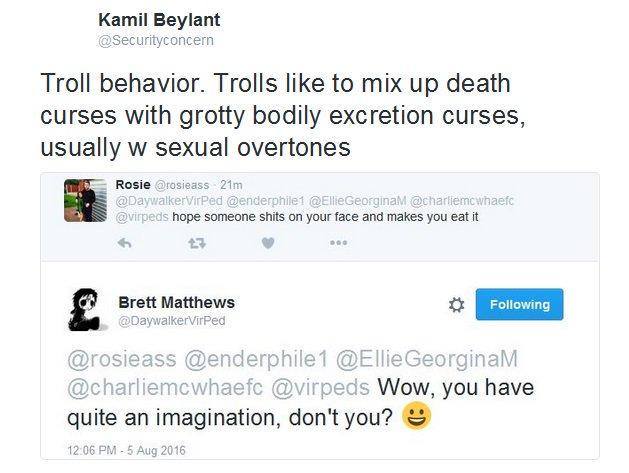 5.  The 'kill yourself' cliche.  Though now banned on Twitter, this cliche is mentally ultra cheap and thus always popular. 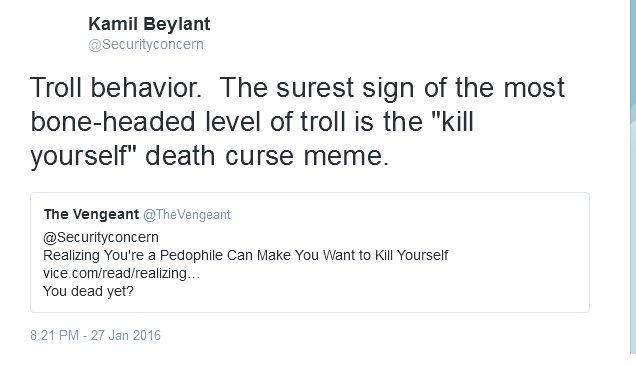 6.  Dehumanization.  The favorite cliche of people who'll start talking about 'Godwin's Law' if you call them out on their political orientation, which is often more along the lines of Goebbels than Godwin.

7.  Reiteration.  The smarter trolls who do this will aim for a Big Lie (a falsehood repeated so often it replaces the truth).  The dumber ones will just say something dumb over and over.

8.  Boredom.  A weak troll cliche, but always employed by anyone who does more than five other troll cliches. 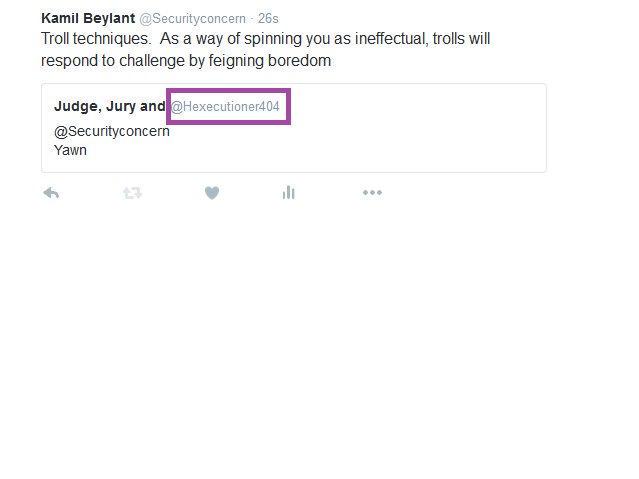 9. Isolation.  For trolls who want to make you feel all alone and doomed to yield to the troll world-view (trollscape). 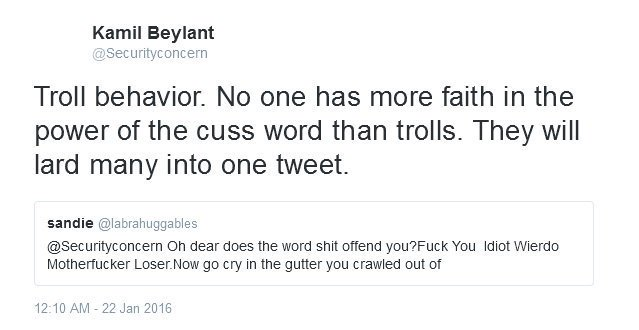 11.  Schoolyard.  Most trolls are probably former schoolyard bullies or wannabes who wished they could have been bullies.  It all comes out online. 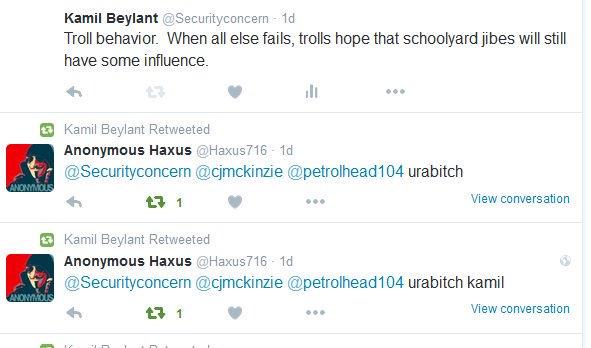 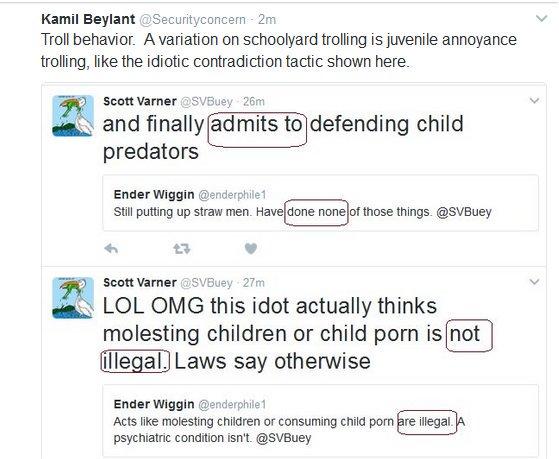 12.  Rapecurse.  Taken as highly psychologically damaging, even though, in the context of how it's being sent out and by whom, it's often maximally frivolous.

13.  Stereotype phrenology.   Ordinary (not a fashion model) face + stereotype = "looks exactly like that stereotype!"  Often said as if divine inspiration had just struck.

14.  Smart-dumb.  Use a word of three or more syllables while being trolled, and you'll see this one. 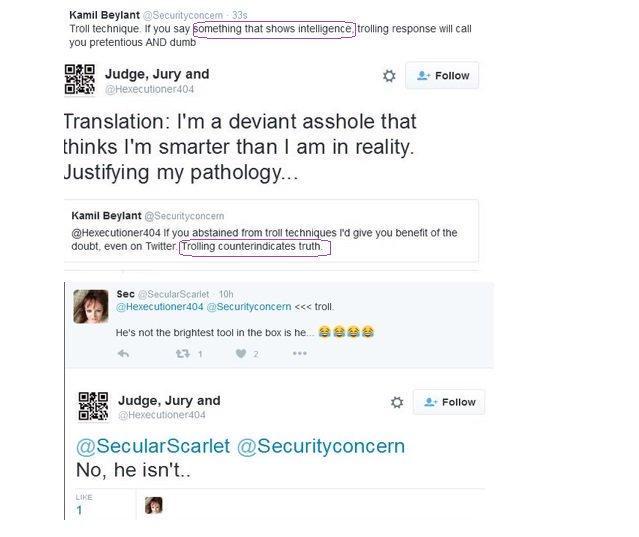 15.  Entropic assertion.   Trolls want you to read primary references for several years before you're qualified to address their silly willy nilly obsessions.  Have you been peer-reviewed?  Are you up for point by point dissection of a conspiracy epic that represents a lifetime of uber-dingbat obsession?

15a.  Complete fabrication.  The aim of entropic assertion trolling is to make you go away and find rebuttals, hopefully forever, and what better opportunity than making you prove your own innocence from a ridiculous fabrication? 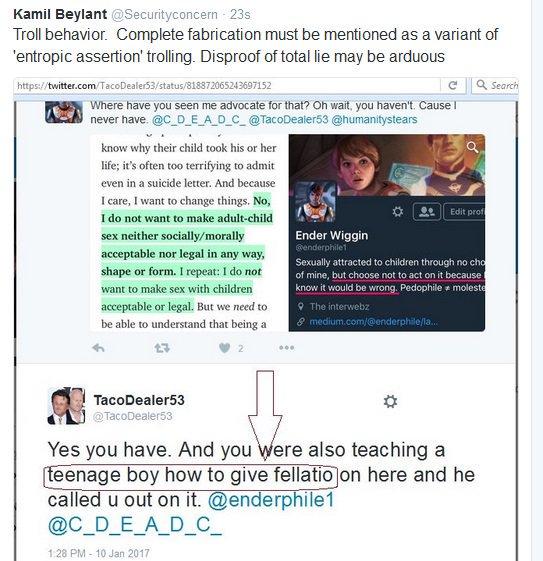 THE UPHILL NEIGHBORHOOD OF OBNOXIOUSNESS

There are a number of relatively upscale or tech-savvy ways that trolls will try to extend their lulzing with.  In alphabetical order of cliche name, except the last one, for reasons that will be clear when you get there.

Heaven forbid your logic should include any comparison that makes the troll feel vulnerable.  Luckily for him/her/etc., all comparisons are between things that are not identical, so the different bits can be focused on. 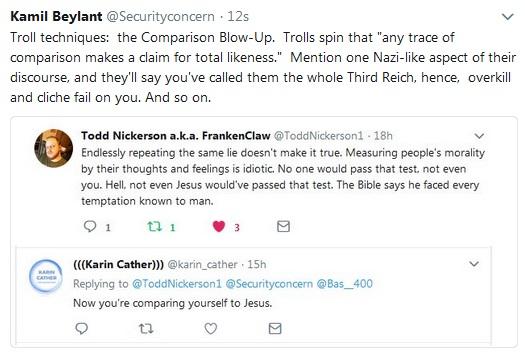 2.  The Fact-Annihilating Source troll cliche.   Like comparisons, facts can easily be made to go away when you're in troll mode.  The gaze of a trollee discredits any source. 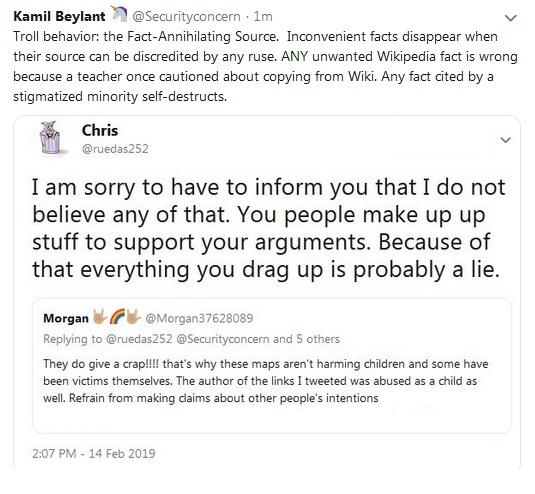 3.  The Freewheel Spin.  Trolling is a license to pluck out any element of what your opponent says and spin it in the direction of a dramatic fantasy that eliminates all unwanted reality in the near vicinity. 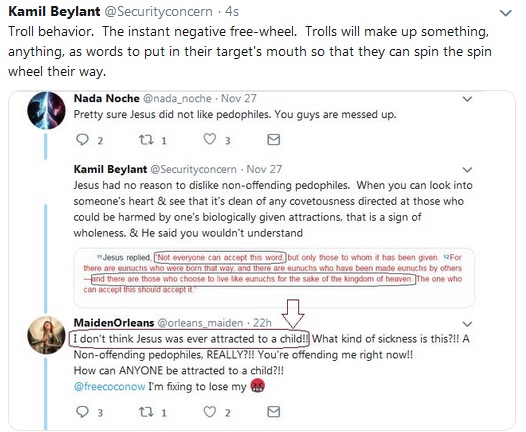 4.  The Groupthink Dung-fling Troll Cliche.  This device for making trollees go cross-eyed was recently standardized in a troll trash-trailer illegally parked next to the studio that produces K-pop.  But it can use any motif, as long as it's distractingly moving or otherwise in-your-face. 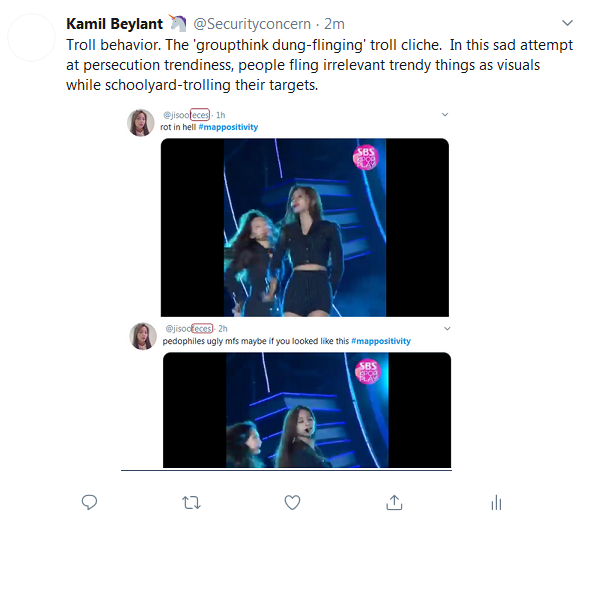 5.  Logic-Twister Troll Cliche.  Some trolls are on the nerdy side and like to think they can use false logic to lulzingly tease your brains out like a cat playing with yarn. 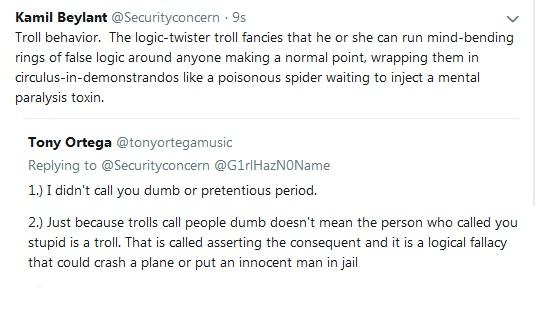 6.  Medieval Heresy Dowsing troll cliche.  A troll determined to prove the trollee is in the wrong will project scenarios into the trollee's thoughts that license the troll's gang to burn the trollee at the stake.  When trolls are in this mode, they typically egg the trollee on to actually do the horrible action since that would make their weak position stronger. 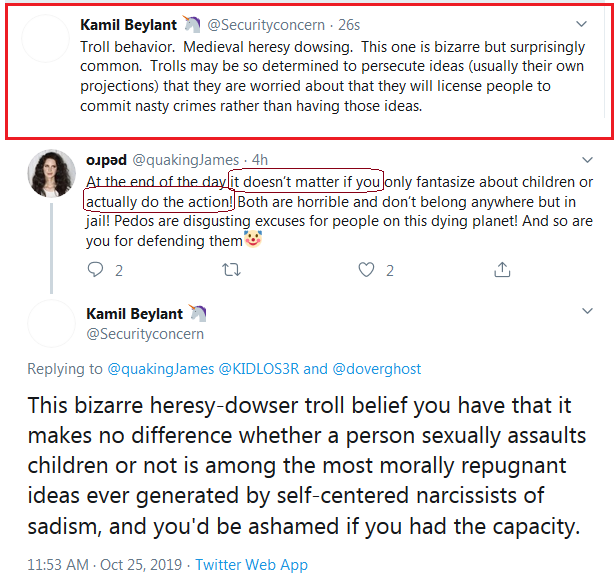 7.  The Troll Mind-Read Cliche.  No matter how private you are, trolls can always see your sex life, and sometimes your motivations as well. 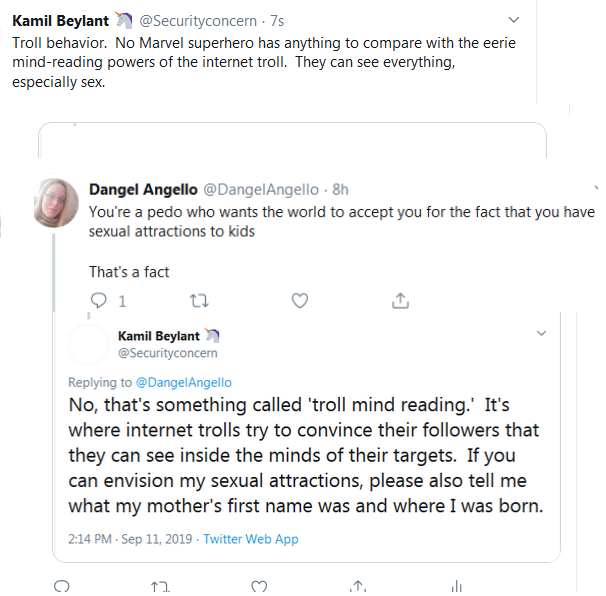 8.  The One-Word Spin troll cliche.   Similar to the Freewheeling cliche above, but typically using one word and taking it in a random direction.  Conveys the subtle message: "your logic can't hold down a gibbon that can gibber at you and scamper through the verbal treetops." 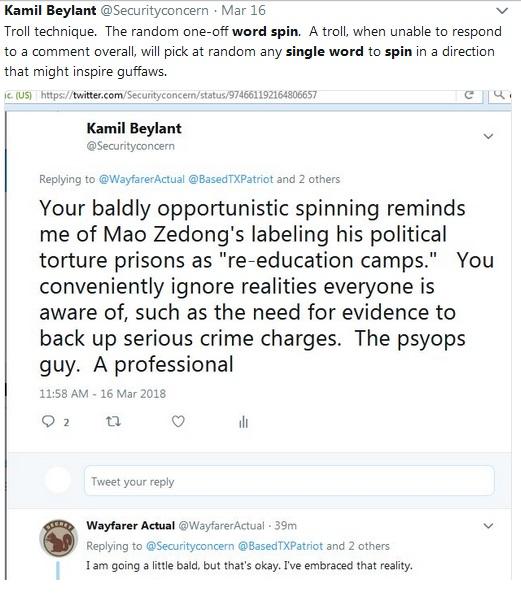 9.  Projected Fake Identity.   When you take on a troll, you can be anyone!  Even using your real name is no obstacle to troll identification willpower. 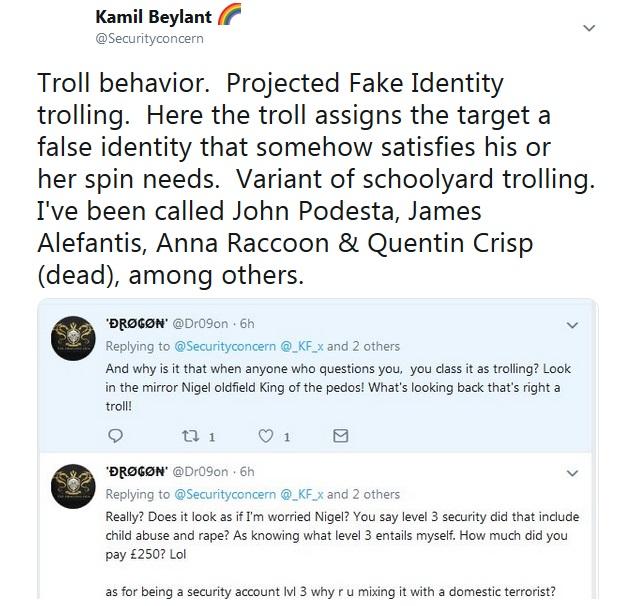 10.  Psychobabble trolling.  This is related to Logic Twister trolling, but it specializes in the other kind of brain-bending. 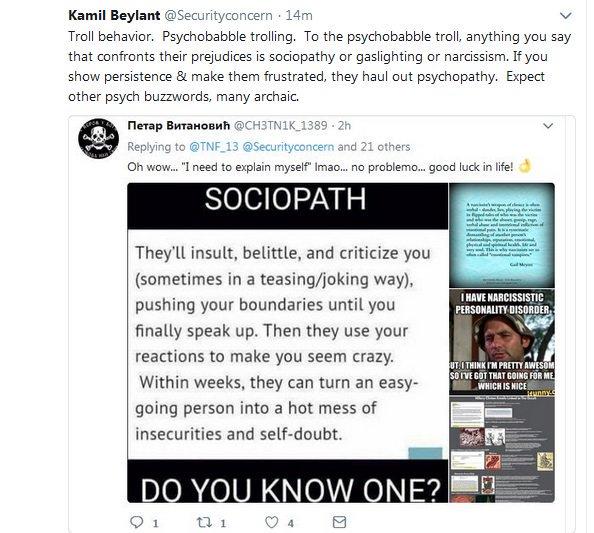 11.  The Science High-Jump.   A reversal of Entropic Assertion trolling puts the onus on you, the trollee, to find peer-reviewed science to back up everything you say.  This then allows the troll to use the Fact-Annihilating Source troll tactic, above, with consummate glee. 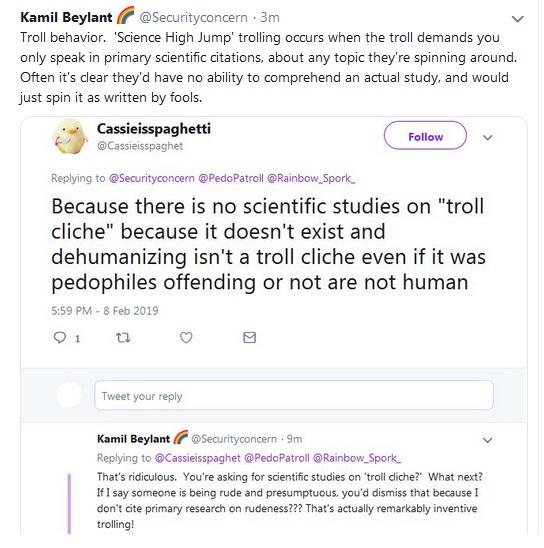 12.  The Social Provocation troll cliche.  This intimidation through aggressive images smacking (sometimes literally) of social rejection could be done with still-photos -- but social media have recently made thousands of obnoxious video gestures available to enhance the glee of their thousands of trolling customers. 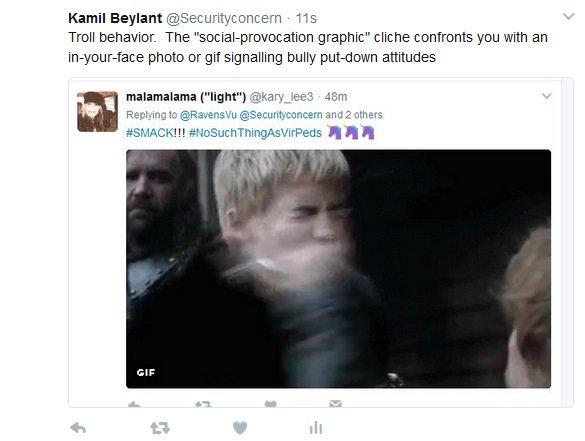 13. The Stonewall, a.k.a., Rockhead Stonewall.  This is the stubborn cousin of basic Smart-Dumb trolling.  The troll simply decreases their mental age or education level until the trollee's point becomes impossible to understand.  Then the troll wins!  (Or hopes you think so). 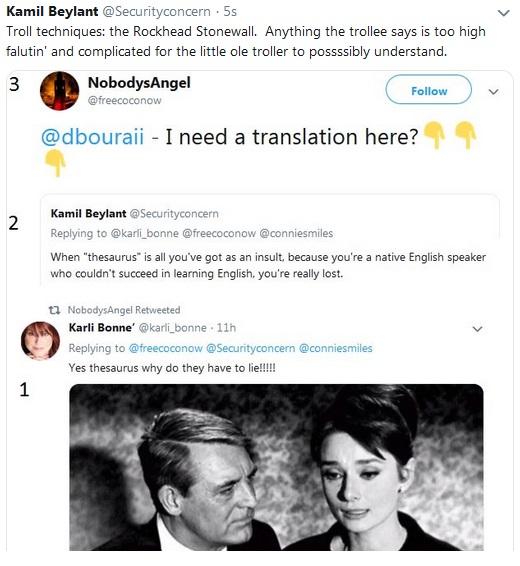 14.  The Twilight Zone troll cliche.  Who on the internet is going to stop you from becoming supernatural when you're already a troll? 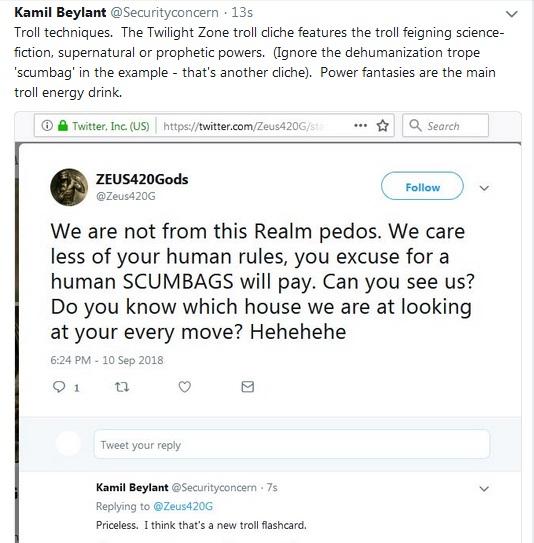 15.  Closely related to the above, Unverifiable Authority trolling.  Instead of choosing super-powers for yourself as a troll, you can simply select any background.  Expert, veteran, victim of horrible crimes, parent, minor child -- all identities are available as long as they put the trollee at a disadvantage.  As for you, trollee, whatever you do, don't threaten to make the troll d0x themself by asking for any smidgen of evidence for their claims!

I tell the users of this cliche that they can either present credentials and be verified in real life as the impressive specimens they claim to be, or they can be pseudonymous and rely purely on their persuasive skills without claiming unverifiable social pre-eminence.  That's fair, is it not? 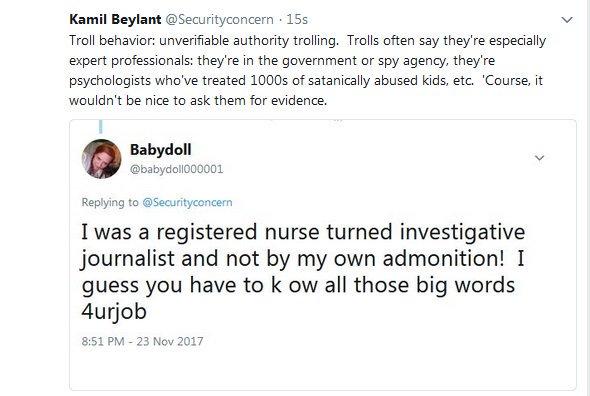 16.  Windmilling troll cliche.  A troll who likes their freewheels to be both numerous and near-random will windmill absurd accusations or scenarios. 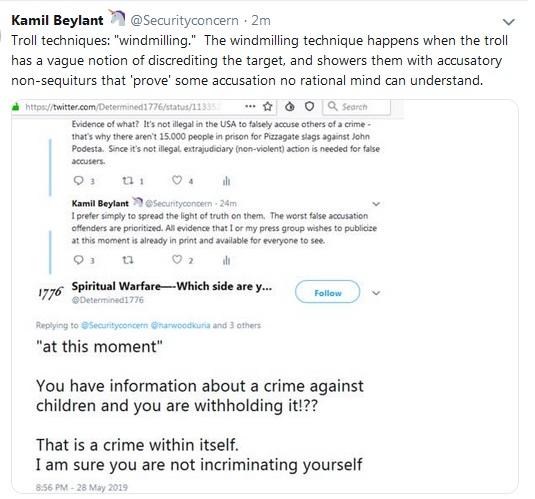 17.  The grand finale of trolling:  the Troll Block Party.  Some trolls just have to be blocked, especially those who settle into the combination of Reiteration and Schoolyard in a concerted attempt to exhaust your soul forever.  When you do this, they throw themselves a party and declare victory.  I like to ruin this party by showing them I'm wise to the game.  What a troll I am, you could say.  And they often do.  But on the other side of bye-bye. 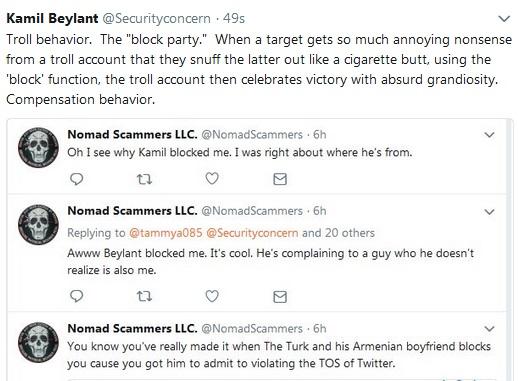 1. "Killdeering."  One of the internet's main forms of aggression is feigning outraged victimhood, and trolls can do it better than anyone. 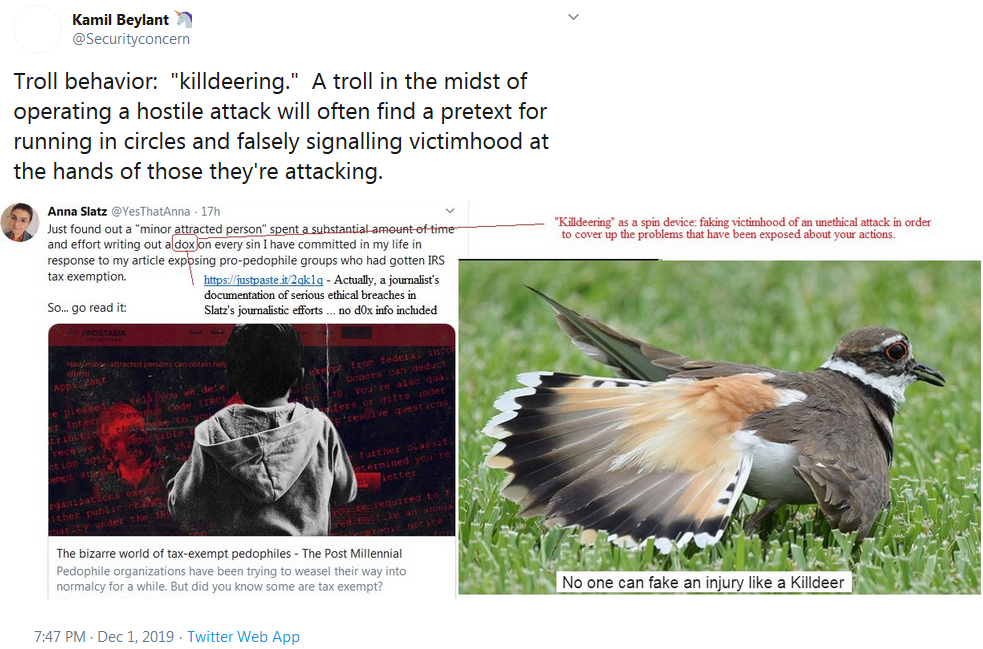