Boycott of World Cup-2018 in solidarity with victims of Putin reprisals! 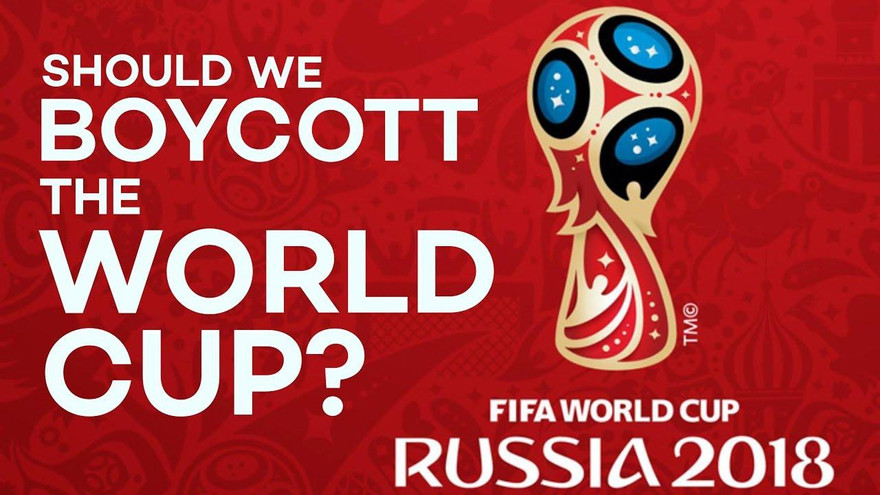 Human life, their rights and freedoms are the supreme value for all civilized world in the 21st century. Anywhere but in Russia and in the annexed Crimea where people faces a threat of being hurled into prison for their beliefs and a civic stand on far-fetched charges. Statement of charges may vary, though the fact that those dissident in Russia are represented either as saboteurs or as criminals and terrorists remains unchanged. Meanwhile, the Kremlin cynically denies all the facts that prove extreme violations of human rights in Russia.

The Russian authorities do not consider annexation illegal and declare it was historical justness that was restored following the results of the so-called national referendum in the Crimea in 2014 (at the point of a guns of people in military uniform without identification marking). Kremlin also denies the participation in the military conflict in the east of Ukraine. However, the Russian authorities do not even take pains to explain constantly increasing number of citizens of Ukraine and of the Crimean Tatars among political prisoners in the Russian prisons. Today, according to representatives of non-governmental organizations, more than 70 Ukrainian citizens are kept in places of detention in the territory of Russia and in the Crimea. Among them are the following:

- 27 Crimean Tatars who expressed an outrage against annexation of the Crimea. 4 of them were sentenced to 5 - 12 years of imprisonment on a charge of participation in the Islamic organization Hizb Ut-Tahrir forbidden in Russia;

- other 23 Crimean Tatars are waiting for trial being accused of various crimes: of membership in Hizb Ut-Tahrir, of participation in the pro-Ukrainian associations in the Crimea during the pre-annexation period, or are accused of far-fetched charges of ‘blackmailing’ (arrests of the Crimean Tatar activists are going on);

- Vladimir Balukh, the Crimean farmer who ran up the Ukrainian flag over his house after annexation of the Crimea was sentenced to 3,7 years on far-fetched charge of ‘illegal storage of ammunition’;

- Roman Souchtchenko, the Ukrainian journalist, was sentenced to 12 years of imprisonment in maximum security penal colony for alleged ‘espionage’;

- Stanislav Klykh, professor of history, and Mykola Karpiouk, representative of the Ukrainian nationalist movement UNA-UNSO, were arrested in Russia in 2014 and sentenced to 20 and 22,5 years of imprisonment in colony for alleged ‘participation in military operations’ against Russia in Chechnya in the nineties;

- Pavlo Gryb, blogger, the youngest Ukrainian political prisoner (19 years) who was arrested by the Russian security services in 2017 in Belarus and accused of preparation for terrorist attack in Sochi, sentenced to 10 years of imprisonment;

- Oleg Sentsov, stage director and participant of the Revolution of Dignity, is sentenced to 20 years of imprisonment in maximum security penal colony for ‘terrorism’;

- Oleksandre Koltchenko, ecologist, manifested his revolt against Crimea annexation, was arrested together with Sentsov and sentenced as the accomplice to 10 years of imprisonment in colony for ‘terrorism’ (https://www.epochtimes.fr/les-prisonniers-politiques-ukrainiens-detenus-par-la-russie-343007.html).

According Amnesty International’s data, Sentsov and Kolchenko were subjected to tortures and bashing after arrest. Trial against them is very much similar to repressions of Stalin times. According to Soviet dissident’s daughter Zoya Svetova who personally appealed to the President of France Macron to assist in putting an end to political repressions against Sentsov and Kolchenko, she “sees the doctored cases and political prisoners in Russia”. Sad to say, the situation remains unchanged, despite personal addresses to the Russian president of such famous Russian stage directors as Alexandre Sokourov and Andreï Zviaguintsev, as well as representatives of the European cultural society.

On May, 14th, 2018 Oleg Sentsov accused of terrorism and condemned to 20 years of a strict regime colony by the Russian authorities for the public protest against annexation of Crimea has begun his hunger-strike with a unique demand to free all political prisoners kept in Russia. His lawyer Dmitry Dinze is convinced, that Oleg will go to the end. “Together we stand untill the end!”, - these are words from Oleg’s letter. Natalia Kaplan (his cousin) in her interview for The Independent said, “his exact words to us were that if he dies during the World Cup he would be happy for having drawn attention to Ukrainian political prisoners.”

Late in May members of the European film academy sent to the Russian president the open letter demanding for Sentsov’s liberation. It was supported by the creative community of many countries of the world, among them such known people as Pedro Almodóvar, Wim Wenders and Ken Loach, Аki Каurismaki, Mike Lee, Bela Tarr and many others. Recently Open Democracy has published an appeal to leaders of all countries asking to refrain from visiting World Cup-2018 in Russia unless all Ukrainian political prisoners will be released by that time. It was signed by Anne Applebaum, Timothy Snyder and many others.

Despite such hard-line response from the world community, Kremlin states that there are no political prisoners in Russia, justice is independent, so all these people are dangerous criminals and will receive “just punishments”. Such statements demonstrate cynicism of the higher degree as history of each political prisoner is well-known to public, and litigations concerning them drew a wide response. Nevertheless, the Russian power and personally Mr. Putin don’t consider it necessary to react both to opinion of own citizens, and to opinion of the international community.

In the situation, when such people as Oleg Sentsov sacrifices his life to rescue tens of other lives and to draw attention of the world community to reversion of Russia in days of Stalin reprisals, the smallest we can do is to boycott World Cup-2018 and any other international events held by Russia, thus showing resolution and unity in struggle for the higher values – for the HUMAN LIFE!