An Export in Solid Supply 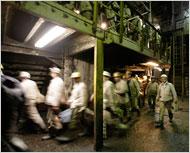 These days, people really are taking coals to Newcastle.

That flow is part of a vast reorganization of the global coal trade that is making the United States a major exporter for the first time in years — and helping to drive up domestic prices of the one fossil fuel the nation has in abundance.

Coal has long been a cheap and plentiful fuel source for utilities and their customers, helping to keep American electric bills relatively low.

But rising worldwide demand is turning American coal into another hot global commodity, with domestic buyers having to compete with buyers from countries like

Environmental concerns have forced some American utilities to cut back on plans for coal-burning power plants.

Nonetheless, spot prices for two benchmark American grades of coal, from central Appalachia and the Powder River Basin of Wyoming, have been rising, with occasional dips, since last spring.

They eased in recent days but are still up by 93 percent and 64 percent, respectively, in the last year, according to figures from Doyle Trading Consultants and Evolution Markets.

How high prices will go, and how quickly the increases will be passed along to electricity customers, remains to be seen.

But as those contracts come up for renewal, price increases are likely, analysts said.

Coal and utility executives predict that coal will remain the most economical fuel in years to come. But they concede that any significant rise could have an important inflationary impact since coal is used to produce about half the nation’s electric power, and coal is also vital in steel production.

For coal producers, the new demand abroad is good news at a time when coal is under political attack at home. More than 50 proposed coal-fired power plants were delayed or canceled over the last year because of concerns over greenhouse gas emissions.

“This export boom right now is the difference between slow growth in our markets and hyper-expansion in our markets,” said Gregory H. Boyce, chairman and chief executive of Peabody Energy, the world’s largest private coal company. “You have two billion-plus people looking for a better standard of living. The world is energy-short and the U.S. coal sector is beginning to fill that gap.”

Many environmental groups see the rising global trade as an ominous development, however, since it promises to confound efforts to limit global emissions. World consumption of coal has increased in recent years by more than 4 percent annually, a major reason that emissions of carbon dioxide are going up, not down. Carbon dioxide is the principal gas implicated in global warming.

“Any rise in coal use around the world is bad news for the environment,” said Alice McKeown, who works on coal issues for the Sierra Club. “The U.S. needs to be a leader on global warming, and increasing our coal exports is moving in the wrong direction.”

The United States will export 7 or 8 percent of its coal production this year, up from about 5 percent last year, industry leaders predicted in interviews. Because of higher prices, the value of coal exports should double, to $3.75 billion.

“There’s no question that the incremental rise in exports this year has driven the prices up,” said Charles E. Zebula, senior vice president for fuel supply at American Electric Power, one of the country’s largest utilities.

Simultaneously, imports of coal are decreasing gradually as producers in Colombia and Venezuela turn to markets other than the United States for higher prices. The shifts are further tightening supplies of coal in the eastern United States, where stiffening regulations and various mine closings have limited output in recent years.

“U.S. coal producers are trying as much as possible to ship coal to the highest bidder, and in many cases that means Europe,” said Gordon Howald, a coal analyst at Calyon Securities. “The once-stodgy coal industry has become an exciting global commodity.”

Great Britain, the country that used its vast coal stocks to pioneer industrial development in the 18th century, has become a major coal importer in recent years, its own industry moribund. With Newcastle-upon-Tyne once being the center of a rich English coal region, the phrase “hauling coals to Newcastle” was a cliché describing an absurd economic proposition.

Nowadays, however, coal arrives regularly at the Port of Tyne from suppliers in the Baltic and South America. American coal goes to other English ports at rising rates; figures from the Commerce Department show that in 2007, United States steam coal exports to the United Kingdom increased by 53 percent and coking coal, used in steel-making, by 20 percent, compared to the previous year.

The boom in coal exports is partially linked to a falling dollar, which makes American coal cheaper on world markets. But there are deeper, longer-term reasons for the world to turn to the United States, which has 27 percent of the world’s coal reserves, more than any country.

As it continues a building spree for coal-fired power plants, China is consuming so much coal that its ability to export is diminishing rapidly; it is expected to become a net importer. Other exporters like South Africa, Indonesia and Vietnam are cutting back for a variety of reasons, including growing domestic needs and local power shortages. Recent flooding in Australia has cut exports, at least temporarily, while an earthquake closed a major mine in Germany.

As a result the pattern of world shipments for coal used for metallurgical and energy purposes is shifting. South Africa and other exporting nations that used to export to Europe are turning to Asia, where coal prices are higher, leaving European markets open for American exports. American coal is making its way to England, Spain, Japan and other countries that traditionally looked elsewhere.

The increase expected this year will make the United States a major global exporter for the first time since the early 1990s. For years, low-cost producers in Australia, China and other countries grabbed the bulk of the international coal trade. But now the United States is becoming a low-cost producer, in part because the euro and other currencies have gained so much value in relation to the dollar.

In the United States, plans to build new coal-fired plants are being shelved, and bankers are scrutinizing new projects because of uncertainties over future costs of carbon dioxide emissions. Both Democratic and Republican presidential candidates say they favor legislation to control global warming, which would presumably limit such emissions.

As the coal industry sees it, exports could be crucial if the American market starts to shrink. Coal executives are talking about upgrading mines, rail and port facilities to meet increasing world demand.

Just within the last couple of months, Peabody began sending coal from Wyoming to Europe, first by rail to the Mississippi River, then by vessel through the Gulf of Mexico. And for the first time in a decade, the company is shipping coal to Japan from the California coast.

“As U.S. coal demand is constrained because of increasing environmental regulation, coal production in the United States will increasingly go toward overseas buyers,” Chris Ruppel, an energy analyst at Execution, a brokerage and research firm, predicted.

The rise in coal prices has so far been invisible to most American consumers because price increases have yet to hit most utilities.

American Electric Power said it had contracted for more than 90 percent of its coal for 2008 before recent price increases. The company said it expects to spend 13 percent more for coal this year than last, after spending about 5 percent more in 2007 compared with 2006.

“We’re not going to see the spot market price in the customer’s bill today,” Mr. Zebula said. “But clearly the price of the good has gone up and will increase over time.”

Already, there are some signs of rising prices. Appalachian Power and Wheeling Power, both American Electric Power subsidiaries, on Feb. 29 filed papers seeking approval in West Virginia for a 17 percent increase in revenues, mainly to pay for costlier coal. If the request is approved, a residential customer using 1,000 kilowatt hours a month would see his bill increase from $64.55 to $73.94, starting in July.

Kenneth B. Medlock, an energy analyst at Rice University, predicted many more electricity consumers will begin to feel the coal price spike over the next year, particularly in states most dependent on coal, like Kentucky, Illinois and Ohio.

“Their power bill is going to go up, but it also will start to affect the prices of goods they buy at the grocery store,” he added.