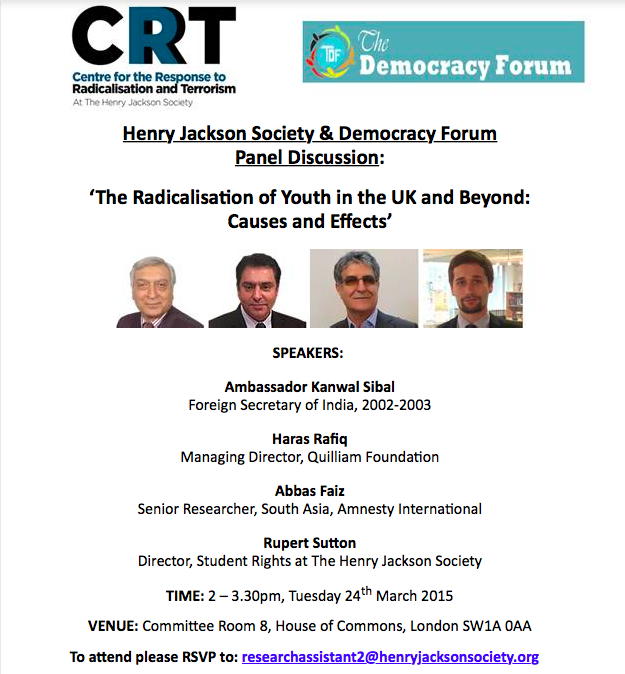 (taken from HJS official email newsletter)
The event, jointly organised by The Henry Jackson Society and The Democracy Forum:
https://www.eventbrite.co.uk/e/seminar-on-the-radicalisation-of-youth-in-the-uk-and-beyond-causes-and-effects-tickets-15925758372 on Tuesday, 24 March 2015 from 14:00 to 16:00 (GMT) includes speakers from Amnesty International speaking alongside members of neo-con pressure group, The Henry Jackson Society
Amnesty UK (@AmnestyUK) campaigns to:
There also have Twitter handles for:

"This was not some rogue operation. This was a program, chilling in its detail, unlawful from day one, that gave the green light to commit the crimes under international law of torture and enforced disappearance – with impunity. It’s time for accountability, including a full investigation, prosecutions and remedy for victims." Steven W. Hawkins, Amnesty USA's Executive Director

"While the ugly truth about US ‘war on terror’ torture is gradually emerging, we still don't know how far Britain was dragged into the mire." Kate Allen, Amnesty UK's Director

"Former President George W. Bush should have been investigated long ago for his role in authorising this program, including his assertion since leaving office that he personally granted the CIA’s request to use waterboarding and other ‘enhanced interrogation techniques’ against particular detainees." Steven W. Hawkins, Amnesty USA's Executive Director

"Under the UN Convention against Torture, torture is never justified – not under any circumstances, and all those responsible must be fully investigated."

2. Has campaigned extensively to get Shaker Aamer released from Gitmo http://www.amnesty.org.uk/tags/shaker-aamer#.VQb9xI7kemI

"We will continue to monitor the situation and demand justice for Shaker Aamer."

"Guantánamo Bay is renowned for its abusive conditions. While detained, Shaker Aamer has, with other detainees, protested against conditions, including by participating in hunger strikes."

"In other words, the evidence against most of the captives was flimsy or non-existent from the beginning. This lack of evidence is reflected in the number of convictions at Guantánamo: only seven of the 779 prisoners have been convicted in military trials."

"Shaker Aamer is one of the 54 who remain in limbo: the prisoners who have been told they will not be charged but are yet to be freed. In fact, the US military has never charged Aamer with an offence, and he was cleared for transfer eight years ago."

"For decades, Amnesty has exposed governments who torture. We have had many successes, including the historic moment 30 years ago when the UN voted for a Convention against Torture- a groundbreaking step towards making the global ban on torture a reality."

“Without European help, the USA would not have been able to secretly detain and torture people for so many years. The Senate report makes it abundantly clear that foreign governments were essential to the ‘success’ of the CIA operations -- and evidence that has been mounting for nearly a decade points to key European allies,” said Julia Hall, Amnesty International’s expert on counter-terrorism and human rights."

“All counter-terrorism laws, policies, and practices must uphold human rights and the basic dignity of all persons." Julia Hall

"The UK was arguably the US’s most important ally in the CIA’s global counter-terrorism operations. The Senate report contains one reference to possible UK involvement in secret detention and interrogation operations: the torture of former Guantanamo Bay detainee Binyam Mohamed."

“European governments implicated in CIA counter-terrorism operations must urgently conduct an effective, broad-based investigation and reform the laws, policies, and practices that allowed such grisly and illegal practices to take place,” said Julia Hall. “All those responsible for torture and enforced disappearances on the territories of European states should be criminally charged and held accountable after fair trials; and justice must be served for the victims of torture.” Julia Hall

"Amnesty is calling for:

• No secret detentions.
• No torture or other forms of ill-treatment.
• Rapid and regular access to lawyers, doctors and relatives.
• Effective legal process so that people can challenge their detention and treatment.
• Independent judges.
• Adequate detention conditions. Including an end to prolonged solitary confinement.
• Prompt and independent investigations when someone dies in detention.
• Independent Monitoring bodies make regular visits to detention places.
• Fair trials within a reasonable time or release.
• All prisoners of conscience released without conditions."

“The Bangladeshi government must ensure that Salauddin Quader Chowdhury is protected and treated properly and that these very serious allegations of torture are investigated." Abbas Faiz

"Amnesty International is deeply concerned about the allegations, and considers the reported torture of Salauddin Quader Chowdhury, as of any other human being, wholly unacceptable." Abbas Faiz

"The US government has clearly had a multitude of good reasons to detain Shaker Aamer on the basis of his suspected connections to al-Qaeda, Osama bin Laden and other jihadists. Furthermore the charities that Aamer said he worked for are known to be al-Qaeda support groups.  Aamer’s formidable reputation among the other detainees at Guantánamo Bay shows that he remains highly influential. There is far more to Aamer than the benign image his supporters portray.” Robin Simcox

"Even if Aamer is released, there should be no illusions over the nature of his past activities and why he was detained at Guantánamo Bay in the first place."

3. On control orders (this should be juxtaposed with the complete opposite stance which Amnesty takes on this issue which is below)

‘Torture is wrong’ and ‘Torture is torture’ is what a lot of people will say. And then they leave it at that. And while I agree that ‘torture is wrong’, the idea that ‘torture is torture’ and that it is all clear-cut is clearly not the case. There are some things which this country believes are torture which America does not and there are things which most members of the public would not recognise as torture which our governments do.

Questionable funding sources of the HJS:
Another donor is Nina Rosenwald, whose Abstraction Fund donated $10,000 to HJS via a US fundraising arm, the American Friends of the Henry Jackson Society.  Rosenwald also finances the US-based rightwing Gatestone Institute which publishes Douglas Murray’s writing alongside Geert Wilders, the founder and leader of the Dutch Party for Freedom who has declared he “hates Islam”.
http://www.theguardian.com/politics/2014/dec/30/rightwing-thinktank-pulls-funds-commons-groups-disclosure-rules
HJS and Amnesty’s views on control order regime
The most telling example of the difference between Amnesty International and Simcox and his ilk can be demonstrated by their views on control orders in which Simcox refers to a particular case which Amnesty UK was involved in.
"One cause célèbre used to prove the wickedness of the legislation was Mahmoud Abu Rideh, who had his case taken up by Amnesty International. Amnesty's director, Kate Allen, said: "I don't know whether or not he's innocent: what I do know is that he has never been allowed to see or challenge the secret 'evidence' against him".
"then, the current system is the best we have, and the government is not offering a better alternative. It should not abandon control orders without being aware of the potentially devastating consequences of doing so."
In contrast Kate Allen, Director of Amnesty UK wrote a article on control order, Control order need controlling http://www.theguardian.com/commentisfree/libertycentral/2009/jun/10/control-orders-amnesty-international
"But I left that meeting more determined than ever that we are right to oppose the control order regime in its entirety. That a man could be driven to the point of suicide because our government forces him to live a half-life, with no opportunity to prove his innocence and no explanation for the presumption of his guilt, is nothing short of disgusting. It's a legacy of previous counterterrorism policy that the new home secretary should look into urgently, before it is too late for Mahmoud Abu Rideh."
It is most telling that their views on this issue like others issues, are the antithesis of one another.
Event brief as detailed in a HJS email newsletter: