How do human CO2 emissions compare to natural Co2 emissions? 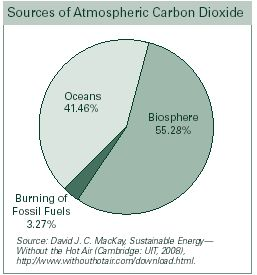 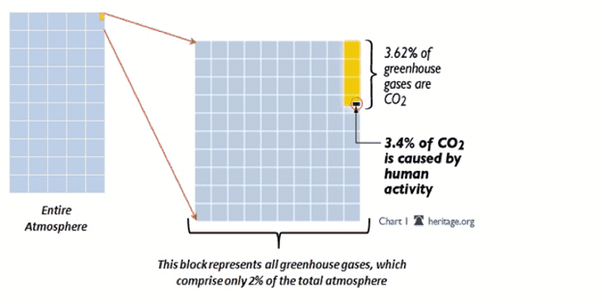 Tim Ball: The Evidence Proves That CO2 is Not a Greenhouse Gas

This lack of correlation between “greenhouse” gas and temps is further demonstrated by comparing temperatures and humidities at various locations at similar lattitudes: 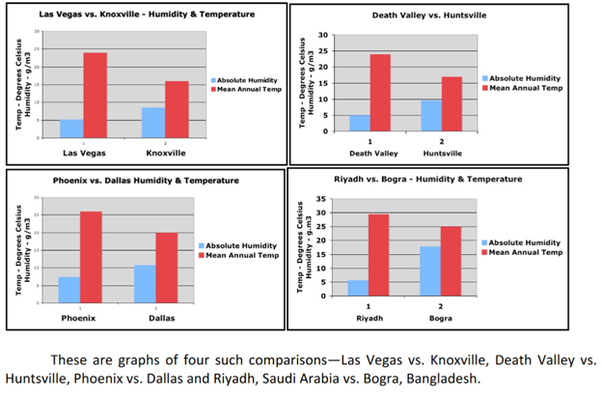 In each case, temperatures are actually lower in locales with higher levels of so-called “greenhouse” gas (water vapor, which absorbs more IR than CO2). And recall that global warming alarmists mistakenly claim that the most serious warming will come from increased levels of water vapor, not CO2, as a positive feedback. They apparently are unaware that “greenhouse” gases, particularly water vapor, act as a negative feedback mechanism and actually help cool the earth. Warming causes more ocean water to evaporate, which carries away enormous amounts of heat. And as these gases absorb IR, they rapidly rise to higher elevations via convection where they more easily emit that IR to the infinite heat sink of outer space.

For a more detailed explanation regarding cooling by CO2 see:

Greenhouse Gases in the Atmosphere Cool the Earth! | PSI Intl 2017

- “It has been demonstrated, from the strict standpoint of physics, thermodynamics and quantum mechanics, that the carbon dioxide is not physically capable of causing any global warming or climate change on Earth.” 2019

Climate Fraud Exposed: CO2 doesn’t rise up, trap and retain heat: “Carbon Dioxide behaves as a coolant of the Earth’s surface and the Earth’s atmosphere by its effect of diminishing the total absorptivity and total emissivity of the mixture of atmospheric gases. Heavy CO2 warms faster and rises, as in a hot air balloon. It then rapidly cools and falls. Once it falls it loses any claimed climate impact.” Climate Fraud Exposed: CO2 doesn't rise up, trap and retain heat | PSI, Inc. (2017)

Atmospheric CO2 levels have changed dramatically numerous times long before humans even existed. Obviously this is all due to changes in naturally-occurring CO2: 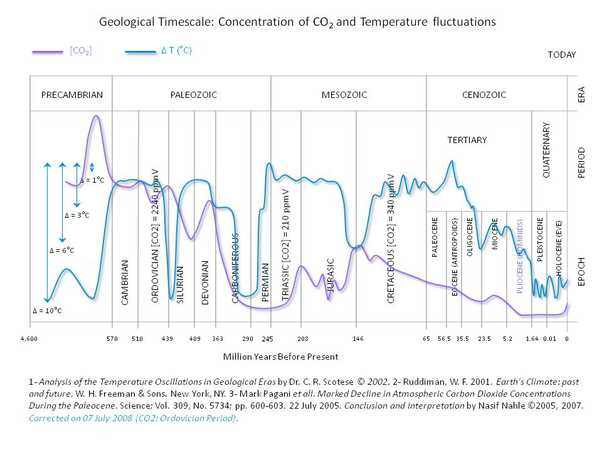 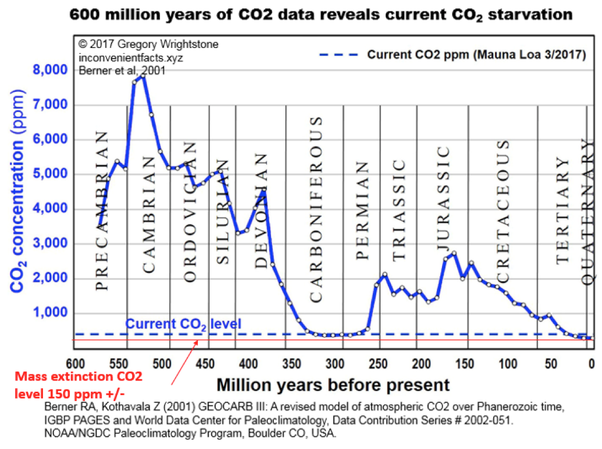 Note that temperatures were often not at all elevated when CO2 levels were up to even 17 times higher than current levels (7000 vs 420 ppm). Furthermore, about 440 million years ago, when CO2 levels were at least 5 times higher, the earth was in an ice age! This contradicts the claim that increasing atmospheric CO2 (natural or man-made) causes global warming.

Research conducted by Dr Wolfgang Knorr of the University of Bristol shows that, since 1850, approximately 54% of anthropogenic CO2 emissions have been absorbed by natural carbon sinks (i.e. plants, oceans) irrespective of the total volume of emissions. The natural variability of Earth’s carbon cycle is 6 to 7 times as large as current anthropogenic CO2 emissions. https://debunkhouse.wordpress.com/2009/11/20/how-much-of-the-atmospheric-co2-is-anthropogenic/ 2009

Recent studies have revealed that natural CO2 being released from volcanoes, particularly underwater volcanoes and vents, are one of the most prolific origins of the increase in atmospheric levels, significantly more than previously thought. And since this CO2 has the same C12/C13 signature as that derived from burning fossil fuels, there is no way to distinguish them.

“Natural volcanic and man-made CO2 emissions have the exact same and very distinctive carbon isotopic fingerprint. It is therefore scientifcally impossible to distinguish the difference between volcanic CO2 and human-induced CO2 from the burning of fossil fuels. Recent research shows that the volume of volcanic CO2 currently being emitted into Earth’s atmosphere is far greater than previously calculated, challenging the validity of the man-made global warming theory.” http://www.plateclimatology.com/discovery-of-massive-volcanic-co2-emissions-puts-damper-on-global-warming-theory

Scientists discover 91 volcanoes below Antarctic ice sheet: “Scientists have uncovered the largest volcanic region on Earth – two kilometres below the surface of the vast ice sheet that covers west Antarctica. After the team had collated the results, it reported a staggering 91 previously unknown volcanoes, adding to the 47 others that had been discovered over the previous century of exploring the region. Scientists discover 91 volcanoes below Antarctic ice sheet 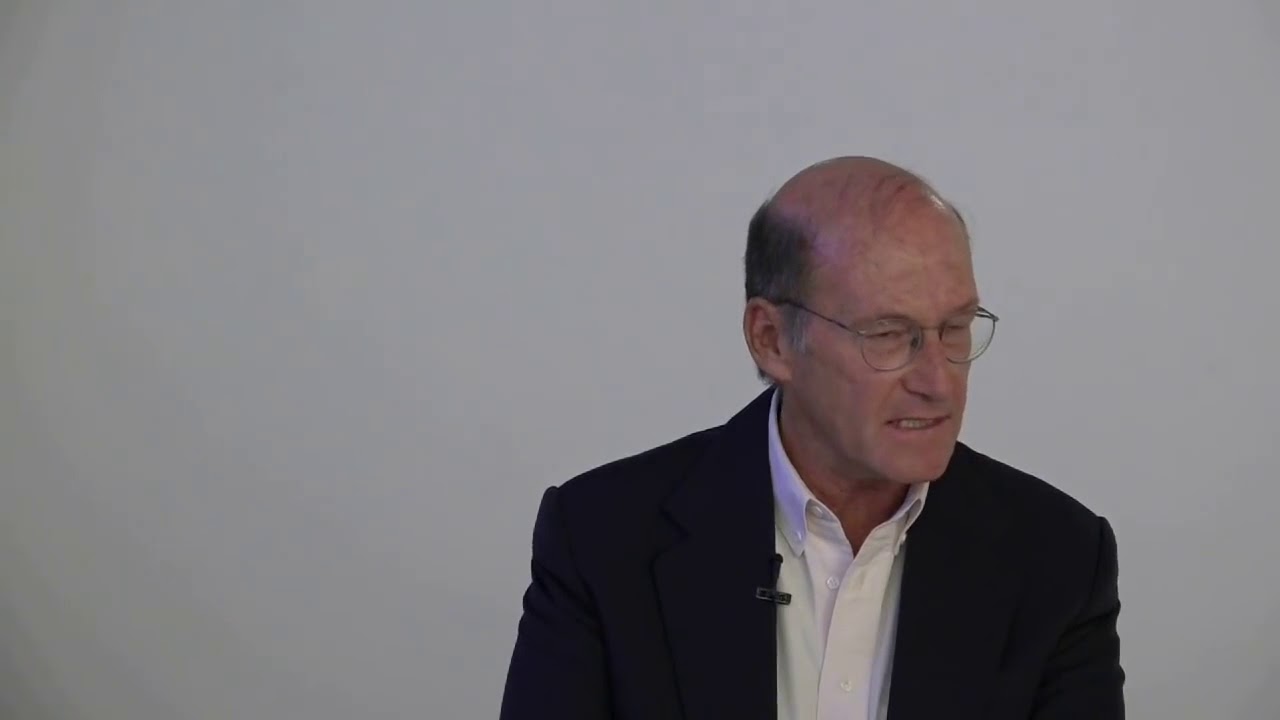 Salby also revealed that, after 2000, the rate of CO2 emissions from fossil fuel use tripled, but atmospheric CO2 continued to rise at the pre-2000 rate. This indicates that the primary source of rising atmospheric CO2 is from natural causes, not fossil fuels.

Finally, there is no statistically significant correlation between human emissions of CO2 and rising levels of atmospheric CO2. In addition, there is no evidence to relate the rate of warming to those emissions:

“We conclude that atmospheric composition specifically in relation to the CO2 concentration is not responsive to the rate of fossil fuel emissions. This finding is a serious weakness in the theory of anthropogenic global warming by way of rising atmospheric CO2 attributed to the use of fossil fuels in the industrial economy; and of the “Climate Action proposition of the UN that reducing fossil fuel emissions will moderate the rate of warming by slowing the rise of atmospheric CO2. The finding also establishes that the climate action project of creating Climate Neutral Economies, that is Economies that have no impact on atmospheric CO2, is unnecessary because the global economy is already Climate Neutral.”

“No evidence exists to relate changes in atmospheric CO2 or the rate of warming to fossil fuel emissions because correlations presented for these relationships are spurious.” Junk Science? Number 99: The Global Warming and climate change hoax - Part 1 - Professor Jamal Munshi 2017

“A statistically significant correlation between annual anthropogenic CO2 emissions and the annual rate of accumulation of CO2 in the atmosphere over a 53-year sample period from 1959-2011 is likely to be spurious because it vanishes when the two series are detrended. The results do not indicate a measurable year to year effect of annual anthropogenic emissions on the annual rate of CO2 accumulation in the atmosphere.” – Jamal Munshi, PhD, economics and applied statistics RESPONSIVENESS OF ATMOSPHERIC CO2 TO ANTHROPOGENIC EMISSIONS: A NOTE

So, essentially, asking how natural and anthropogenic CO2 compare is somewhat irrelevant since they are basically identical, and neither causes significant climate change.