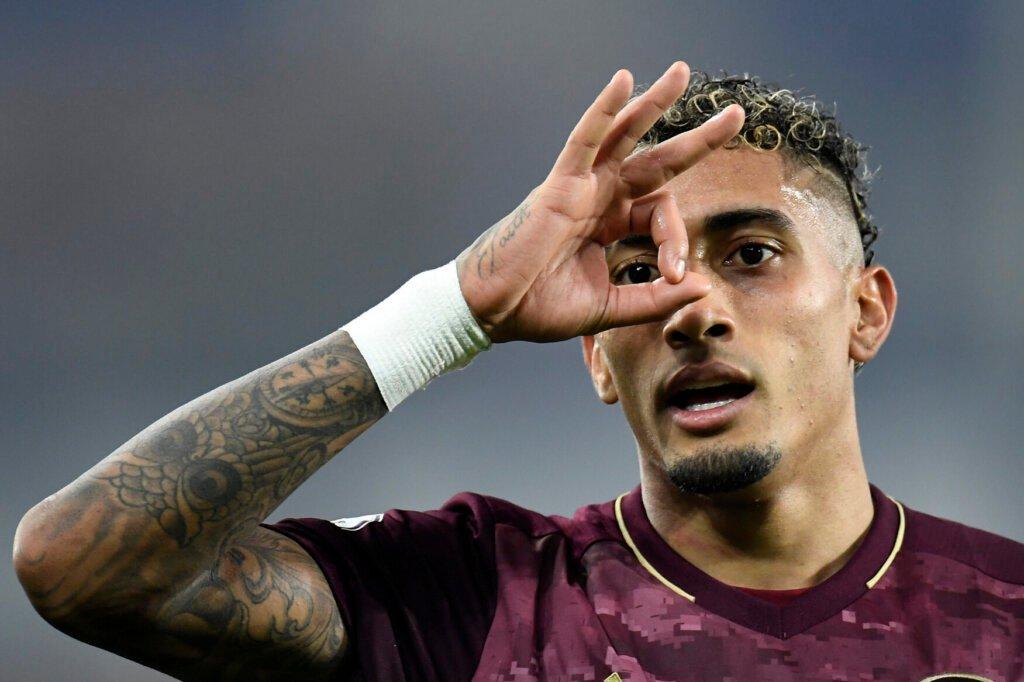 By Phil Hay and Mark Carey 2h ago

After punching impressively above their weight, there are signs this season of Rennes reverting to the mean. Poor form has been creeping up on them since Christmas and on Monday, Julien Stephan resigned as their head coach.

Rennes asked Stephan to reconsider but in the words of the club’s president, Nicolas Holveck, he was losing faith and “deeply convinced he was no longer the right man for the job”. Back in August, managing Rennes meant leading a squad who were about to dip their toe in the Champions League for the first time but they have been slipping on all fronts: third in Ligue 1 last season but 10th and falling this time; bottom of a European group in which they would have expected to beat Krasnodar to the third-placed Europa League spot; and defeated early in the Coupe de France, a trophy they won under Stephan in 2019.

Did Raphinha see this regression on the horizon? And what about the directors at Rennes? There was something about Raphinha’s £17 million transfer to Leeds United in October which smacked of pragmatism, of a club losing him without a great fight. Rennes banked a fee they will need as they fall back on domestic income, in a country where broadcast rights are in chaos.

Raphinha got his move to the Premier League and extricated himself from a club whose peak was not sustainable. Leeds were the biggest beneficiaries, paying under the odds for a winger with immense promise.

Rennes’ excuses for taking £17 million plus add-ons ranged from Raphinha wanting to leave to his reputation being overinflated to the rather lame defence of ensuring they were recouping what they spent when they signed him from Sporting CP in 2019. But in the midst of post-mortems after Stephan’s resignation this week, Raphinha’s name showed up. “The departure of Raphinha weighed on Rennes’ game,” said a report in So Foot. “(Their football) has been less dashing in October.” In that part of France, they are reaching the conclusion that Raphinha’s exit hurt them at a fairly charitable price. 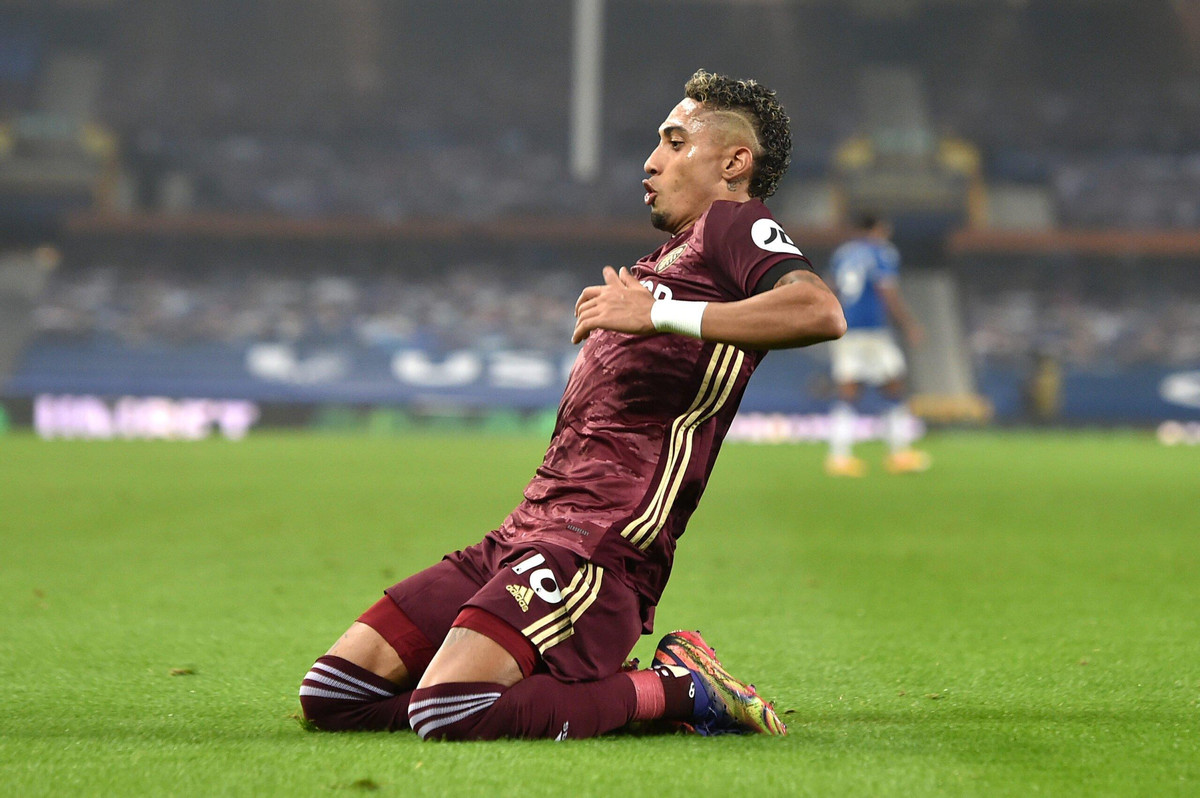 Stephan’s appraisal of Raphinha when he first joined Rennes was as accurate a picture of the Brazilian as anyone could have painted. “He’s a player who can eliminate his man, break through lines and dribble superbly,” Stephan said. “He’s also capable of winning the one-on-ones, making the last pass and scoring goals.”

Those qualities were identified by Leeds through data and naked-eye analysis of Raphinha and his transfer to England ranks as one of the most astute of the last summer window, both in terms of value and impact. Using analytical models, The Athletic sought to establish how the deal compared to other major attacking signings in the Premier League.

What is apparent with Raphinha, and what made his exit from Rennes so peculiar just one year into a four-year contract, is that the indications of quality were evident from his performances in Ligue 1. He might be improving in England and finding another level but he went through the gears during his time in Portugal and France.

Although he was seen at Rennes as a player whose impact fluctuated, statistically his creativity per 90 minutes was on a par or better than most players of a similar ilk in France (comfortably top 10). In the squad at Rennes, his passes were more likely than those of anyone else to provide assists and to those in the know, like Marcelo Bielsa and Victor Orta, his stock was certain to rise.

Of the four new signings made by Leeds last summer, Raphinha was the third most expensive; marginally less than Diego Llorente and far below the £27 million outlay on Rodrigo. His price tag fell outside the top 20 fees invested by Premier League clubs and was nowhere near the top whack of £70 million-plus put up by Chelsea to sign Kai Havertz from Bayer Leverkusen. Rennes made more money by selling Raphinha’s old team-mate, goalkeeper Edouard Mendy, to Stamford Bridge, pulling in £22 million.

There is no accurate way of comparing Raphinha’s value pound-for-pound with a player like Mendy. The same is true of someone like Ben Chilwell, even if there are already questions about whether the £50 million left-back will suit the tactics of Thomas Tuchel at Chelsea. But any scratching below the surface of Raphinha’s Premier League displays shows how convincingly Leeds beat the system in capturing him at a relatively modest price.

Raphinha’s “shot-creating actions” — which includes the two offensive actions (eg, passes, dribbles, drawing fouls) made before a shot is taken — per 90 minutes places him in the division’s top 10 of players with more than 500 minutes behind them, a list in which only one other summer signing (Chelsea’s Hakim Ziyech) also appears. Raphinha has overtaken Rodrigo as the member of Bielsa’s squad most adept at fashioning shots on goal, for him and others around him. 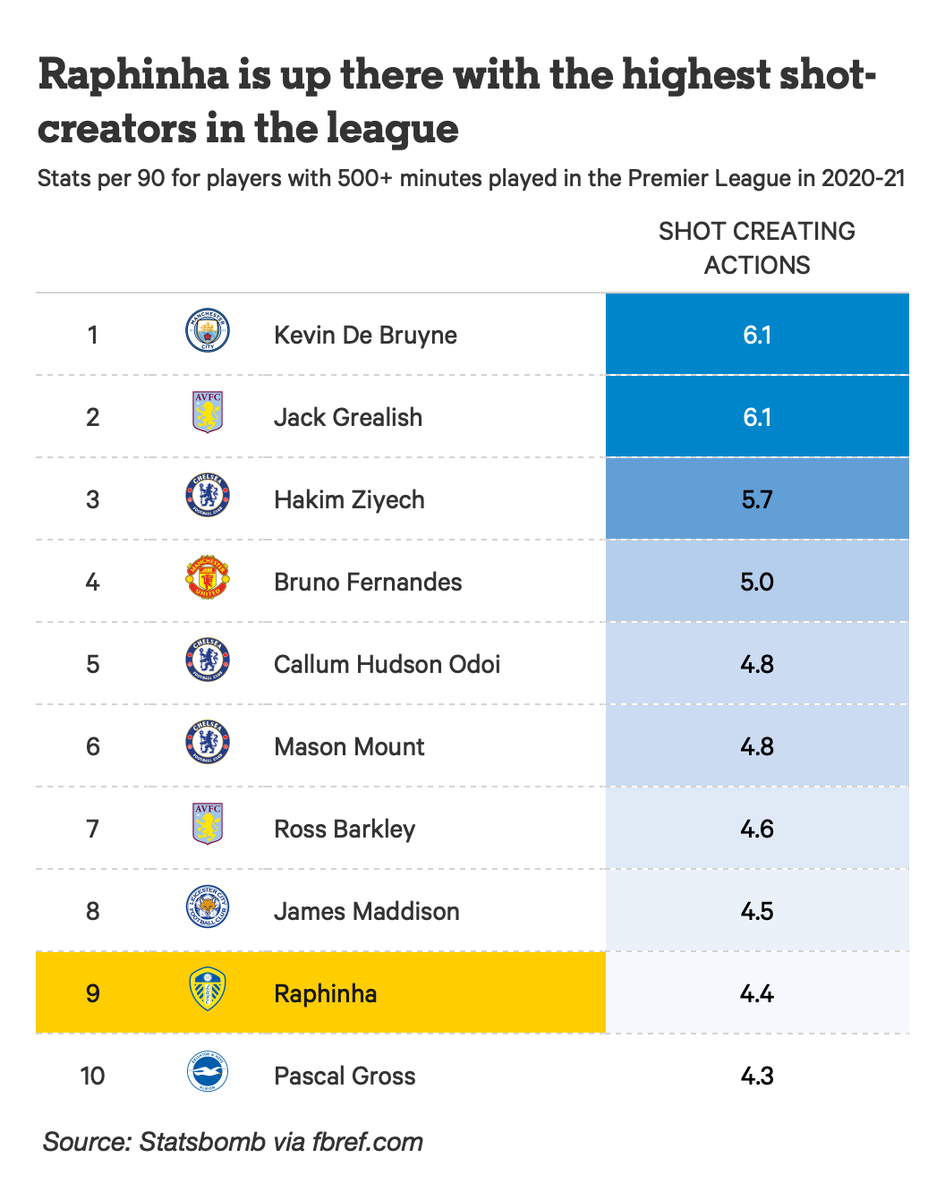 Leeds are in possession of a footballer who is not only good at forcing the issue at the end of attacking moves but who is talented at building those moves, too. Raphinha, according to the data, is the top performer at Elland Road when it comes to making a positive impact in the earlier stages of Leeds’ build-up, helping to drive them upfield.

His set-piece deliveries allow him to threaten with dead balls as well as open play. At Rennes, he showed the ability to strike a ball cleanly and to do so with both feet. Footage of him also showcases his pace and his knack for dribbling at top speed in France. It was easy to understand why Stephan gave cursory answers to questions about his impending departure in October, saying only that “we want to keep our best players”.

To rate the transfer in comparison to other Premier League deals, The Athletic studied the leading 15 attacking players signed last summer, ranked on their goalscoring and minutes played in the top flight. The list excludes loanees on the basis that any profit from future sales of those players would go to the parent club. It also excludes players who have failed appear in more than 30 per cent of top-flight minutes (ruling out Liverpool’s Diogo Jota, for example).

Raphinha ranks third across the whole division in terms of his combined tally of goals and assists per 90, behind Edinson Cavani at Manchester United and James Rodriguez at Everton. In terms of fees paid, Cavani and Rodriguez were free transfers and good value in that sense, although both will be earning considerably higher wages than Raphinha. Cavani’s numbers are particularly impressive, helped by six goals in nine league starts. But at 34, he has a negligible resale value and a contract up for renewal in the summer. His appearances have also been limited as his fitness has been managed.

Rodriguez is more than four years younger than Cavani and has more time on his side, making him a high-quality acquisition by Everton. The data speaks to good recruitment at Aston Villa, where Ollie Watkins (£28 million from Brentford) and Bertrand Traore (£17 million from Lyon) have found their feet quickly and enhanced the club’s best XI.

But Raphinha complements a high rating for goals and assists with a much better contribution to the creation of chances in general. For all that Newcastle United have prised double figures out of Callum Wilson, he is almost into his thirties and has suffered from major injuries in his career. He was a £20 million quick fix for Steve Bruce, in contrast to an asset such as Raphinha, who has every chance of appreciating in value rapidly. 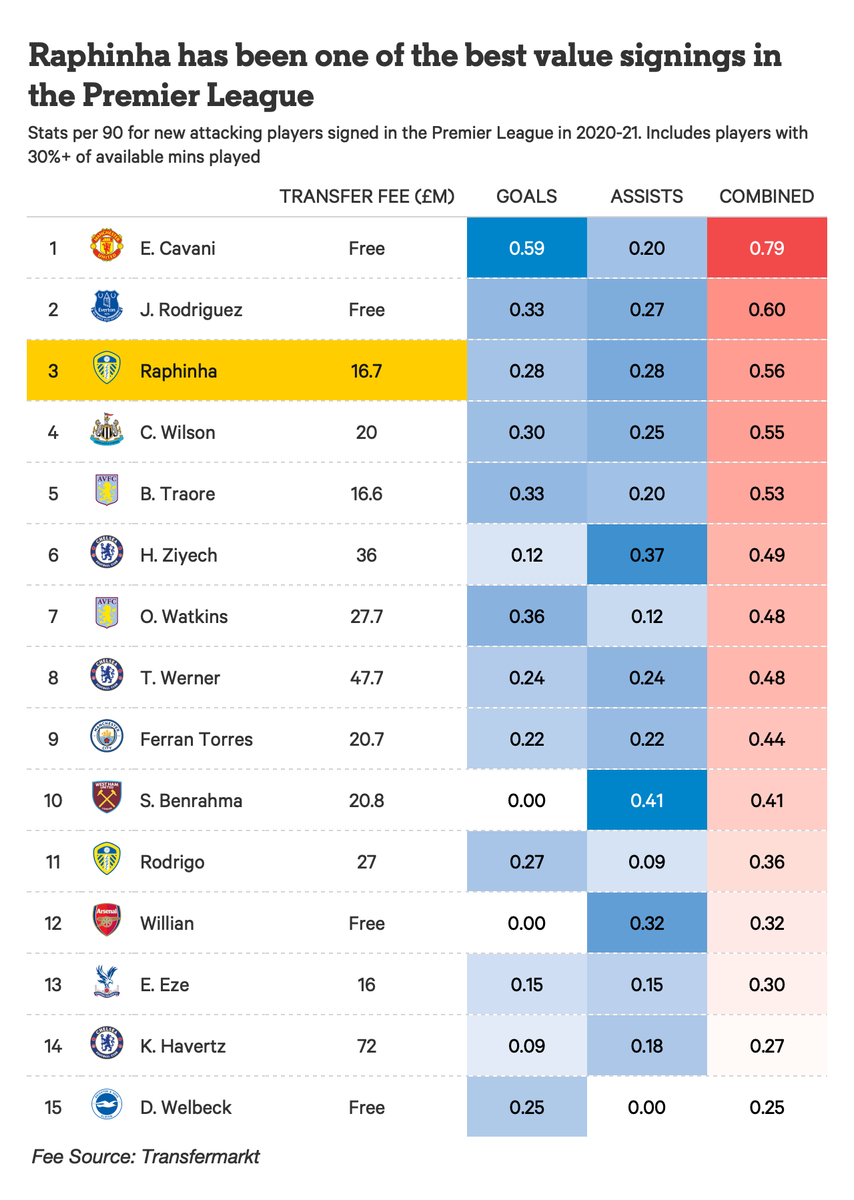 As well as matching up favourably to far more expensive players such as Timo Werner and Havertz, Raphinha compares well to signings of a similar value to him; Eberechi Eze, for example, who cost Crystal Palace £16 million from Queens Park Rangers. It could be argued that Eze is being compromised by a mundane style of play at Palace, which places an exceptionally heavy creative burden on him, but that argument further shows how Leeds got it right with Raphinha. They not only found a winger with talent but also a winger who would fit with Bielsa’s tactical model. Some of the other big-money deals completed last summer — Rodrigo to Leeds from Valencia included — have not yet been successful enough to increase the valuation of the signed player.

Moreover, Raphinha is featuring regularly under Bielsa this season. The following graph is a striking picture of how infrequently some of last summer’s more major arrivals are actually playing. To date, Havertz, Ziyech and Cavani have all completed fewer than 50 per cent of league minutes for their club and Rhian Brewster, Sheffield United’s £23 million signing from Liverpool, has made just eight starts with two-thirds of the campaign gone. Since coming from France, Raphinha has missed just one match through injury and held down a place with consistently strong form. Watkins, who has 12 goals for Villa in all competitions, is even more prominent and is yet to sit out a single Premier League minute. 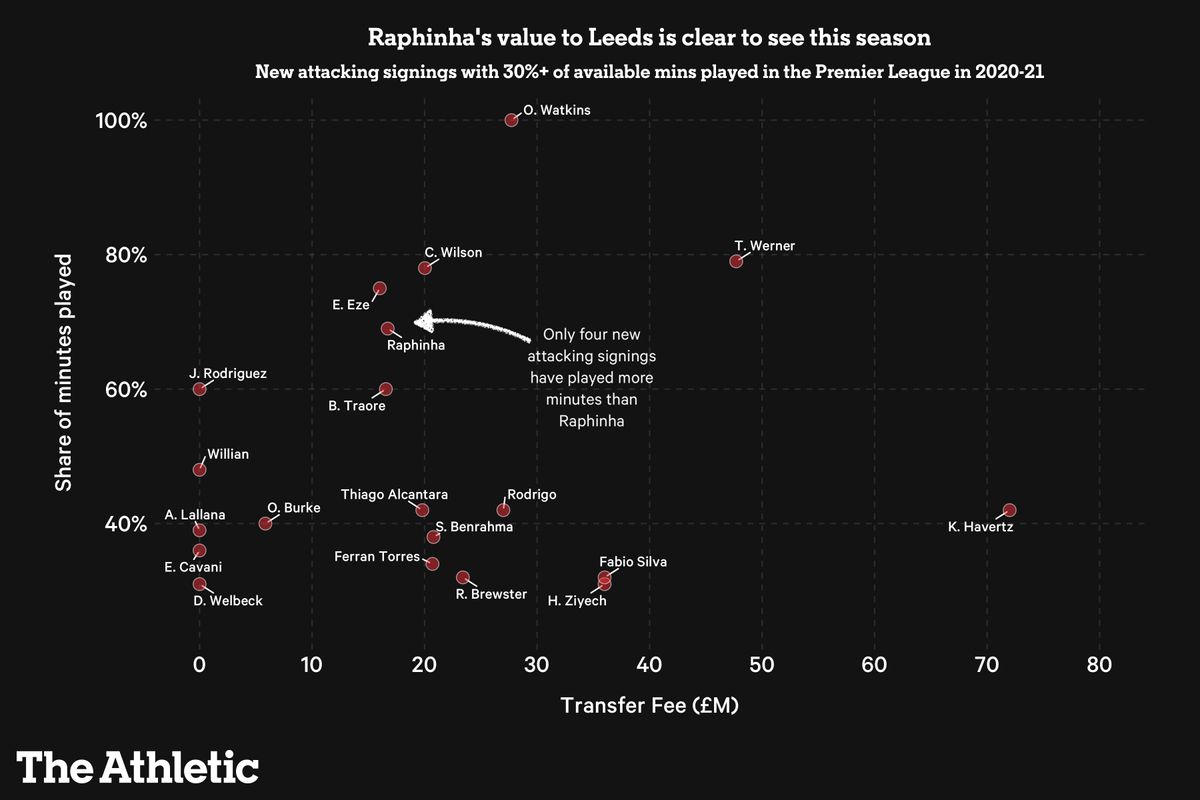 Raphinha, as a winger or a wide forward, is close to being the full package when it comes to his range of skills: a goalscorer, an assist maker and a regular contributor in more general build-up play. Bielsa admitted that the 24-year-old was almost too natural to coach (“the best thing you can do with players so spontaneous is to let them be themselves,” Bielsa said) but the speed and trickery of Raphinha’s running are counterbalanced by an awareness of what is happening around him. Here is a player adept at spotting openings and picking the right pass.

Five months on, Leeds can tell themselves that they emerged from the summer window with one of the best attacking signings of any Premier League team. All factors considered, there are few — if any — that look as well-judged.

As this week has shown, Rennes were nearing the end of a cycle when Raphinha left them in October. Leeds were in the middle of a cycle that has plenty of life left in it yet. Timing can be crucial in football and Raphinha got his right.