In the new world of weaponized Hurricanes all the old assumptions give way to new realities that are frequently counter-intuitive. 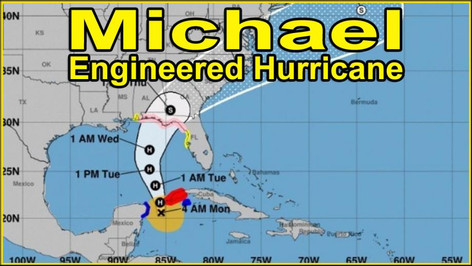 Our home was located north of Hurricane Andrew in the City of South Miami when it hit south Dade County and Homestead on 8/24/1992.

During the 1990's I volunteered as an HF amateur radio operator (N4KWB) for duty at the National Hurricane Center (NHC) radio station several times except for Andrew. In later years the NHC HAM radio station (WX4NHC) moved to the FIU campus where I happened to engage conversation with an entry level meteorologist who talked about experimental operations where military aircraft would perform aircraft "seeding" operations.  I wasn't impressed with hurricane seeding operations in the 1990's but later recalled those conversations when the story of aerosol manipulation of hurricanes emerged in 2009;   (HAMP - Hurricane Aerosol Microphysics Program) followed by superstorm SANDY.

Hurricane Andrew`s worst winds lasted no longer than a blink of an eye.

They were small, about the size of two house lots, but they showed how capricious a hurricane can be, an international wind expert said on Wednesday.

``If you happen to live in a mini-swirl area, your house will be gone,`` Fujita said.

An estimated 35,000 homes were destroyed in south Dade. The newly discovered super winds probably accounted for a small portion of that destruction, he said.

There is no way to predict these super winds and there is little that can be done to prepare for them, he said.

Using aerial photographs, videos and the pattern of fallen debris, Fujita played detective, hunting for evidence of mini-swirls. In the past couple of months he has confirmed at least 20 mini-swirls. He estimated that Andrew created about 100 of these tiny pulses of destruction.

He said Dade County officials were trying to toughen their building codes. But Fujita said it is impossible to build homes that are affordable that could withstand 200 mph mini-swirls.

Fujita, who developed the theory of downbursts that explained several deadly airline crashes and who created a scale for determining tornado intensity, said he found two new and dangerous phenomena in the edges of the eye walls in Hurricanes Andrew and Iniki: mini-swirls and microbursts.

The 80 mph punch of the mini-swirl is added to the already existing winds of Andrew, about 120 mph, Fujita said. The resulting combination hits a home with 200 mph winds.

The winds last perhaps two-tenths or three-tenths of a second, as opposed to 30-second gusts of wind, Fujita said.

And these mini-swirls are 50 to 200 feet in diameter, so they are about one- thousandth of the width of a hurricane.

The mini-swirls are different from tornadoes because they are smaller, slower and vanish in an instant, he said. There were no tornadoes confirmed in south Dade during Hurricane Andrew, but there were many in Louisiana, Jarrell said.

The other new phenomenon, the microburst, is a tad weaker than the mini- swirl. Microbursts have winds of 160 mph and are smaller, about the size of a mobile home, Fujita said. These microbursts are sudden, incredibly intense downward pushes of dry air from clouds.

Fujita said he never expected microbursts in a hurricane, because they require dry air, but there was dry air near the storm`s eye. He found about 20 microbursts in Hawaii and two in Homestead, he said.

Fujita also said buildings that were constructed parallel to winds seemed to withstand the storm better than those perpendicular to winds.

Jarrell said that could help in building construction, but that South Florida gets its most powerful storms from two directions -- south and east.

Wind expert Dr. Ted Fujita has found at least 20 of what he calls mini- swirls in Hurricane Andrew. Here`s how the whirlwinds work:

3. As whirlwinds move beneath large clouds, air is sucked upward. This stretches a whirlwind skyward. The winds on the ground spin at about 80 mph and contract to about 100 feet across.

4. Whirlwind is pushed by hurricane`s 120 mph winds. On the ground, effect of both the inside whirlwind and hurricane is a wallop of 200 mph.