Special thanks to Z who made a detailed database for all the passive artifacts and let me use it. Follow this link:

There are 7 different grades for each artifact:

You need to sacrifice 4 artifacts of the same grade to upgrade one of your artifacts. And you really want to do it, because in most of the cases each upgrade doubles the effect of the artifact (with some exceptions)!

Note also that you can’t equip the same type of artifacts twice, even if they are of different grades.

If you have a lot of Warzone coins you can purchase artifacts, except for the Insane ones - you can get those only by sacrifice!

There are 25 Passive and 16 Active Artifacts.

I will categorize them into 4 groups:

Artifacts you want to have equipped at all the time when you are not actively playing the game! 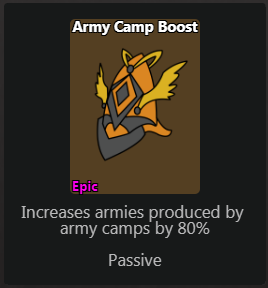 Arguably the best artifact of the game!

*Note that your camp upgrades and AP upgrades aren’t affected by this artifact.

Here for example my own stats:

As you see, it doesn't look like 80% boost, because it isn't affected by all the other upgrades for the camps: the tech upgrades and the advancements

The next three artifacts are your passive money generators.

Following the last update (5.14) it looks like BMB now outproduces both TMB and Money Bonus on all maps.

If you have BMB stick to it. If you don't and must choose between the two, calculate what generates more money. Remember to adjust yourself to the map One artifacts may suddenly outproduce the other.

I talk more on the issue in the WZI Economics chapter.

If you don’t have at least 3 of the artifacts mentioned above, you can equip your free slot/slots with the following artifacts: 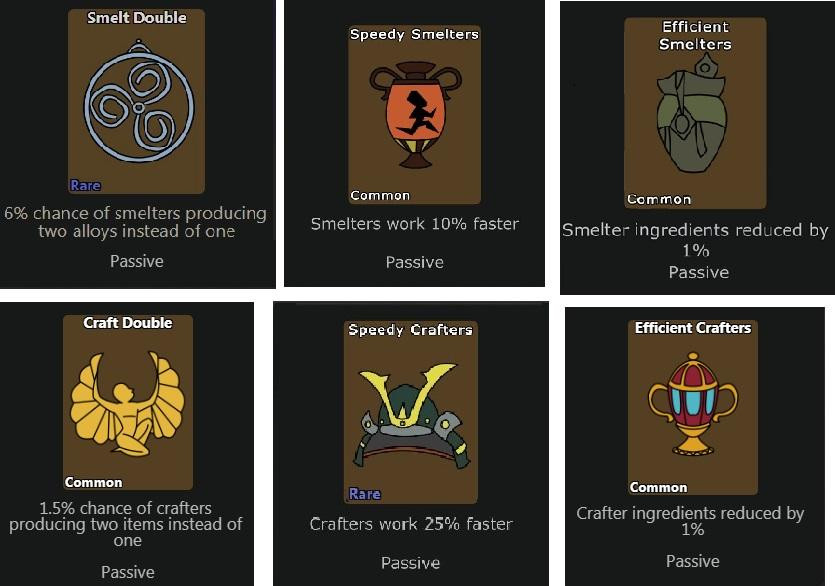 Out of these 6 artifacts I want to single out Speedy Crafters. It got nerfed lately but still, at later stages of bigger levels this artifact can greatly increase your income if used correctly. The calculations are presented in the WZI economics chapter (link above).

The other five artifacts are just not good enough. Mainly because of their low percentages boost. If you have the extra slot, use them if you really really want, otherwise sacrifice! 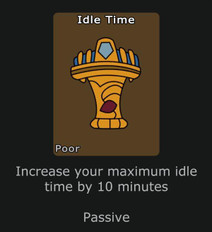 Idle time... this poor one gives 10 minutes for example... its good only if you have the extra slot…  better upgrade your Idle Time using your AP.

4-6 hours idle time are enough to enjoy the game at the early stages. Sacrifice this one.

3. Passive Artifacts while being active

You need those artifacts when actively conquering territories. At this stage I’ll just constantly swap between the following artifacts, depending on what my actions are: 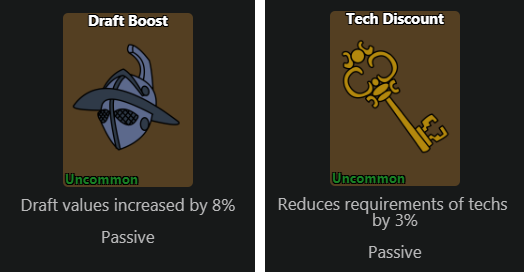 Two very good artifacts. I’m equipping them at the beginning of each session to collect my drafts and check if there is an upgrade ready. Those small percentages will add up to a significant bonus over time.

After I'm done with these two I switch to the next artifacts:

I keep the first three always equipped when I’m tapping on territories. Sometimes you complete a bonus and there is a hidden money/army cache – you want to be prepared and not lose some really needed boost!

The fourth Cache Boost Ring affects all the caches simultaneously. In comparison to the other three, its boosts are utterly unimpressive! I sacrificed it pretty much right away. 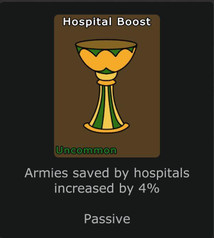 This artifact affects your hospitals. Completely useless at the beginning of a map! But its impact is going to grow based on how many hospitals you have and their upgrade level. During the middle and late stages of the maps this artifact is constantly equipped when I'm playing actively.

It was sadly nerfed in the last update (5.14). There is probably very little reason to upgrade it beyond rare

Four super useful artifacts that reduce the costs of upgrading. It doesn’t look like much, but the reduction really adds up to a significant discount.

Army Camp Discount and Mercenary Discount are probably slightly more important than the other two to have.

These three come really in handy at the late stages of the game, after you’ve upgraded your tech tree to the max and now all your resources are waiting to be sold!

Each one of them gives you some kind of boost every 16 hours. Between the activations there is a cooling down period, during which the artifact is doing nothing, just sits there blocking your precious artifact-slot.

Most of them are completely useless and should be sacrificed on the spot!

However, some time ago the bonuses of active artifacts were boosted so now a few of them may actually be usable at some situations. You can check all the updated statistics of the active artifacts at Z's artifacts database: 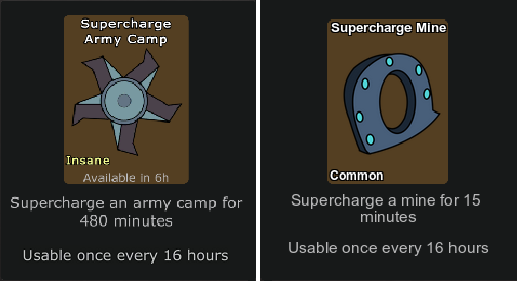 The Supercharge Army Camp is the only big exception to the active artifacts. For now it is completely OP. It boosts one of your army camps like a Supercharge Army Camp Power, making it work at 20x power for X time. Keep the artifact and try to upgrade it to at least epic grade as soon as possible. It worth the locked slot, especially now that a 4th artifact slot is available (by finishing the level Hardened Scandinavia).

The Supercharge Mine on the other hand is a great example of sacrifice material.

The three artifacts can help you in a very specific situation, when you encounter the "giant" stack some of the map have.

The Damage Territory makes sense only starting from legendary grade. The other two already from epic grade. I wouldn't use them on lesser grades.

Starting from update 5.14, you now get a legendary Tripple Strike for free by finishing the level Hardened Copper Creek Castle! This artifacts is very good in eliminating the big army stacks you find in the late levels.

Take a look at this example from Triskelion: 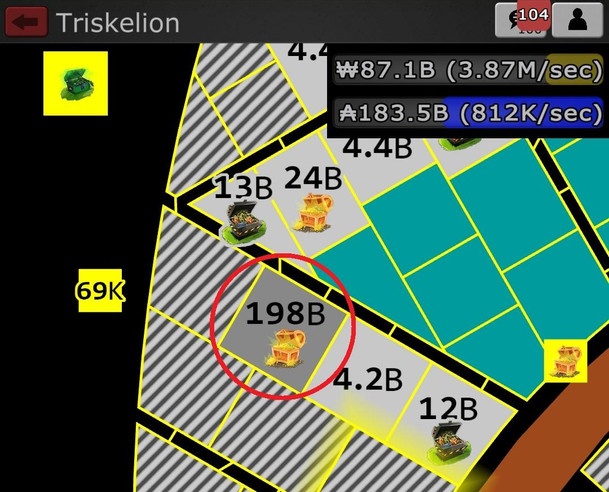 The legendary TS gives you 160% discount in conquering a territory, which in reality just means: it conquers 100% of a territory.

This free artifact now makes the other two even more useless than they were before.

Nothing to say. Sacrifice!

Nothing to say. Sacrifice!

Again nothing to say but sacrifice! 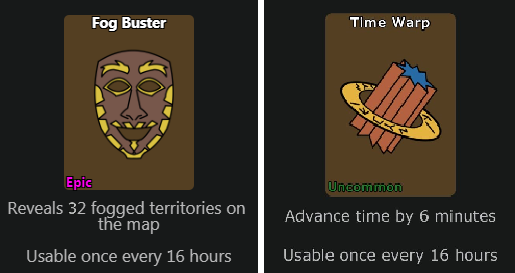 The Fog Buster could have been really useful starting from your 3rd ascension, when all your Fog Buster Powers are depleted. Revealing the map helps you conquer it quicker. The problem is that a single Power reveals 150 territories and the artifact on insane grade only 128, which is insane.... insanely bad. So acrifice!

At the end I'd sacrifice all of them except of the Supercharge Army Camp and the free Tripple Strike, because:

1. It's difficult to excuse a blocked artifact-slot for 16 hours

2. Upgrading an artifact even to an epic grade may take you several months (unless you pay with coins...). In my opinion there are so many vital passive artifacts you want to upgrade that it's just not realistic investing in an active artifact for some situation that "might" occur in the future.

There are 4 different dig sites you may encounter during game play. The chances of getting different artifacts vary slightly from dig site to dig site, so I’ll simplify it by rounding the numbers up.

At the beginning, you’ll probably dig every artifact you can find. When you have found your main artifacts you’d concentrate on upgrading them. If you have multiple dig sites awaiting for you, avoid dig-sites 3 and 4 and go for the common/uncommon combination. Only after the good sites are cleaned up, you can try your luck with the sites 3 and 4 and hope not getting the poor artifacts.

You need 5 poor artifacts to make a common one.  You need 25 of them for one uncommon.

Note that digging artifacts costs money that you could otherwise invest in upgrading your camps, hospitals and mines. Also remember that you don't need to dig ALL the artifacts in each map, so make your calculations as you play. At the end, find your balance between digging and upgrading.

So when am I going to get my insane artifact?

Let's say you are extremely lucky and dig only uncommons from each digging site.

That will give you 5 uncommons a week, which is equivalent to one rare.

You'll need to play for two and a half years to get one insane artifact! And only if you sacrifice each and every single artifact you own. To get only one.... and at the end this nonsense-plan won't work at all, because it's is impossible to only dig up uncommons.

Should I then stick to 2-3 good artifacts and sacrifice the rest until I upgraded my chosen artifacts to a level I'm happy with?

With each dig you have only a 1/41 chance in digging a specific artifact. If you received a good artifact you might want to use in the future, keep it in your backpack.

Using artifacts like all other aspects of the game is a choice of personal preference. Different players have different approaches:

- Some choose 2-3 artifacts, sacrifice all the others, even the good ones, to get those 2-3 to the legendary level as soon as possible.

- Some will collect all the good ones and slowly work on upgrading them all.

- Some find active artifacts useful and.... ...I can't really find a single word to justify such a decision.

However don't forget: Artifacts are inferior to AP, so don't waste you time wating for a dig to finish, and don't replay maps because you really liked it's dig sites.

I've just finished my 1st ascension with the following artifacts: 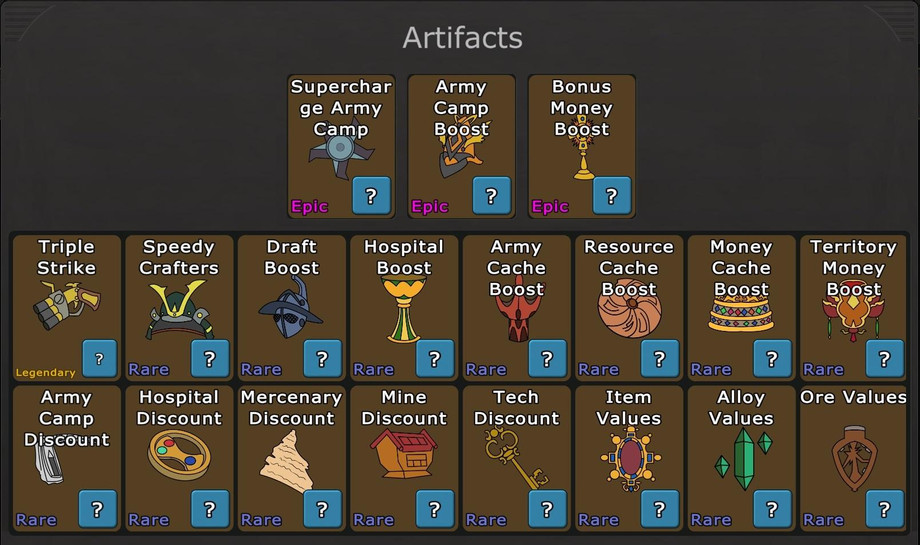 My next step is going to upgrade one of the three epics to a legendary, and then concentrate on some of the rare ones (like Mercenary Discount and Item Value) and upgrade them to epic.