Bart Hickey blind mechanic, had his dream come true to be a blind driver. He dreamed One day he would drive his 1969 Dodge Dart on Salt Flats. Who could have imagined that this man’s passion would have such a global reach? With the help of his son and others, he made it happen. As a result, the story of Bart Hickey’s dreams became contagious. As a result, his dreams became his son, Brendan’s dreams too.

When you first meet Bart Hickey blind mechanic in his Automotive Shop and see him multitasking, it is difficult to believe. Yes, a blind mechanic his whole life. As a young boy, he developed a passion for cars. First, with the encouragement of his father and mother. Secondly, with his love of popular mechanics written in braille. After, this love led to the purchase of an Automotive Shop…Barts’ Automotive and Towing or (B.A.T), which you would also think was a dream come true.

His favorite car was a 1969 Dodge Dart which the everyday hero never lost hope in owning. above all, Bart can’t describe what it is about his bonding with metal or that he never lost the dream of driving in a car himself one day. 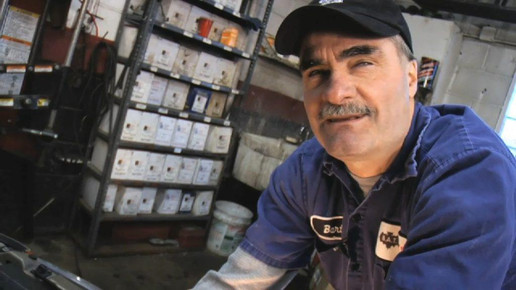 Now that you’ve gotten to know Bart a bit better… CLICK HERE to Meet his Mother and Son!

As A blind mechanic…

But with the help of his son Brendan Hickey, that dream came true.  Mercedes-Benz, the German luxury carmaker fulfilled the wish of a son, who wanted his blind father to drive a high-performance car. What was so unusual about this generous act by Mercedes is the fact that, Bart Hickey, father of Brendan Hickey is a blind man and has been working as a mechanic for all of his life. Despite working around cars 24×7, he was never able to drive a car because of his blindness. What an everyday hero.