Neturei Karta Jews Oppose Zionism and the State of Israel

Neturei Karta is a Jewish group in opposition to secular Zionism and calls for the dismantling of the State of Israel. According to the Torah Jews are forbidden to have their own state until the coming of the Jewish Messiah.

The Six-Pointed Star is Not Jewish, It's the Rothschild Shield

Research by Dr. O.J. Graham reveals the six-pointed star adorning the Israeli flag is not Jewish but was adopted by the Rothschilds. Graham's book traces the star through Freemasonry usage to Mayer Amschel Bauer, who, in the 17th century, changed his name to depict the red six-pointed star (or shield) which he had hung on his door in Germany, and thus began the family of "Red Shield" or Rothschild. The research carried on through this family, to their court of arms, to Cabala, to Astrology, to Hitler and his putting a yellow six-pointed star on all Jews during the holocaust, to the Zionist symbol, and finally to the flag of the State of Israel and beyond. 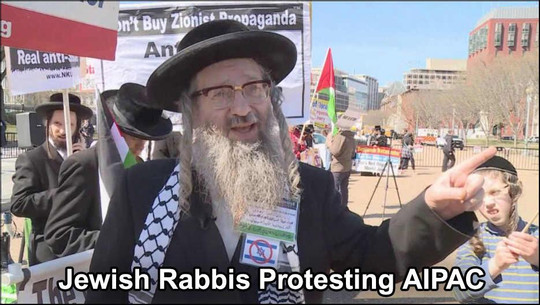 A group of anti-Zionist Orthodox Jews joining a rally and march protesting the Israeli lobby in USA [AIPAC] during their annual convention in Washington DC on March 24, 2019 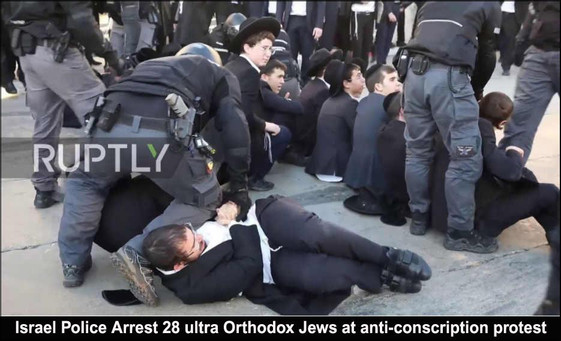 THE ROTHSCHILDS OWN 80% OF ISRAEL – AND DIRECT ITS GENOCIDAL POLICY
The Rothschilds own 80% of Israel, according to Simon Schama. They built the Israeli Supreme Court. They own Reuters and the Associated Press (AP), the two biggest media agencies in the world. -- They have a controlling share in the Royal Dutch oil company, the Bank of England and the LBMA (London Bullion Market Association). They foment wars, install presidents, dethrone kings and bankrupt nations, such is their power.

VIDEO: Memorial to the 1924 assassination of Dr. DeHaan by the Zionists

On July 2, 2019, a group of Jews went to visit the gravesite of Professor Yaakov Yisroel DeHaan, the 95th anniversary of his murder at the hands of the Zionists. DeHaan was an important political activist who worked alongside Rabbi Yosef Chaim Sonnenfeld in the 1920’s to establish the Eidah Chareidis, the anti-Zionist Jewish community of the Holy Land, as an independent community not represented by the Zionists. His many political connections, his mastery of diplomacy and his work with Arab leaders to find a haven for Jews outside of the context of Zionism posed a threat to the Zionists, and in 1924 they assassinated him.

VIDEO: Israel's New Racism: The Persecution of African Migrants in the Holy Land

A delegation of Orthodox Jewish rabbis expressed solidarity Wednesday with U.S. Rep. Ilhan Omar after she was criticized for making "anti-Semitic" comments.

Members of the anti-Zionist Jewish group Neturei Karta International came to Omar's office in Washington saying they wanted to show their support for the freshman congresswoman.

Title: Since The 'Star of David' Is A Satanic Hexagram, What Is The Biblical Symbol For Israel?
https://www.cuttingedge.org/news/n2223.cfm

Title: PROPERLY UNDERSTANDING ONE OF THE MOST IMPORTANT ILUMMINATI PLANNING DOCUMENTS -- THE PROTOCOLS OF THE LEARNED ELDERS OF ZION
https://www.cuttingedge.org/news/n2128.cfm

The Star of David is not a Jewish symbol. The seal of Solomon is a tool of Jinn control.
http://www.abovetopsecret.com/forum/thread878258/pg1

The six pointed Star, is it the Star of David?
http://www.despatch.cth.com.au/Despatch/Jews02.htm

Rothschild Website:  In its financial activities, the Edmond de Rothschild Group promotes the values of excellence that have forged our reputation for 250 years. Our values are based on the three guiding principles of the Rothschild family’s