2. Hemispheric  temperature change versus a shift of  the Earth's coating 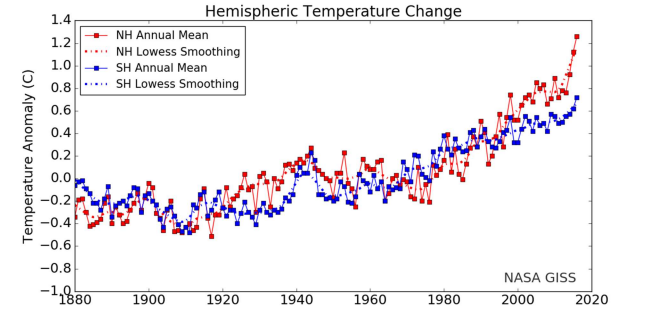 Fig.1. Hemispheric temperature change
Source of image:  https://data.giss.nasa.gov/gistemp/graphs/
Date of download 13 August 2017,4:45 Jakuszowice, Poland
What we can see in the above picture is a higher temperature in Northern Hemisphere NH  versus Southern Hemisphere SH in the period around 1914-1956 and 1990-2017. It can be explained by the shift of Earth's coating over liquid Earth's core. Meteorological stations located all around the globe have moved to the ecliptic that way, that on the northern hemisphere is more of solar irradiance versus southern hemisphere, and higher temperatures in NH are being noted, and SH is cooled.
2a.LOD (length of Earth's day) versus Earth's coating movement 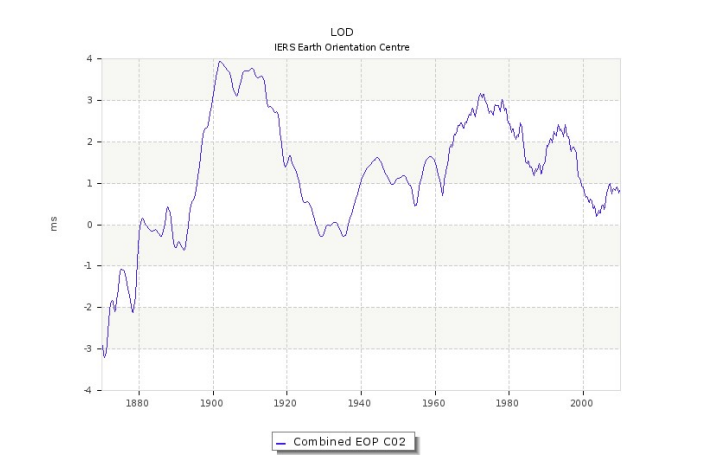 3. Movement of Earth's coating and circulation of water in Hadley cell 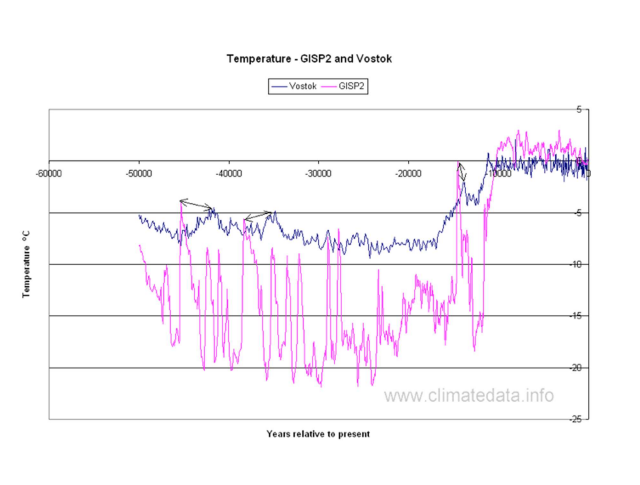 See the graph under the link:

5. GISS Surface Temperature Analysis (based on GHCN v3 + SCAR)
The graphs of the zonal temperature (below) distribution on the Earth's globe for the periods 1880-1961 and 1962-2018 presented below show the shift in time of high-temperature zones to the North direction of the globe. This may indicate the shift of the northern hemisphere toward the ecliptic plane (and its much greater solar insolation than a southern hemisphere), i.e., the shift of the Earth's coating - the Northern Hemisphere more in direction to the ecliptic plane. 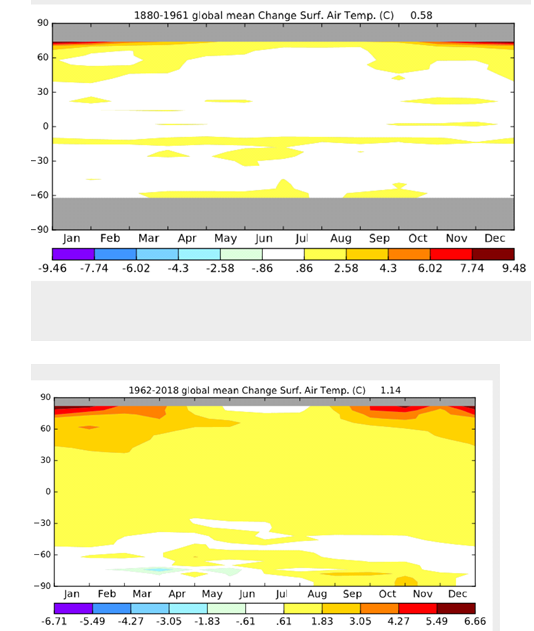 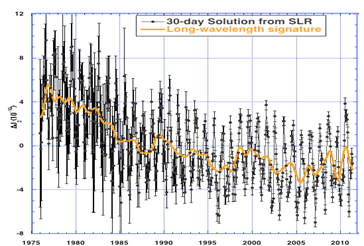 Source of pictures from work:
Degree 2 and Geocenter Variations from Satellite Laser Ranging
Minkang Cheng
Center for Space Research
The University of Texas at Austin
We see in the above picture twelve-monthly changes of J2 each year which are caused by gravitational pulling of the Earth's coating by the Moon. 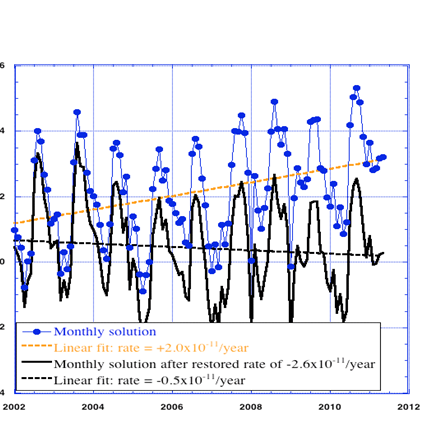 8. Mechanism of growth and fall of empires

The terrestrial globe is divided into two hemispheres: northern and southern. The northern hemisphere is made up of more thick continental plates and is heavier than the southern hemisphere, mostly made up of thin ocean plates. The Earth globe is affected by the cosmic gravity and more strongly pulls the northern hemisphere with a variable force causing it to move to the ecliptic plane. It is possible due to the liquid intermediate layer between the rigid coating and the solid Earth core. The Earth coating slides over the liquid middle layer under the influence of the attraction of gravity alternating forces.

The Earth climatic zones are immobile to the ecliptic plane because they depend on the balance of solar radiation falling on the surface at various angles. As a result, the earth coating movement in relation to climatic zones causes regional climate changes in different parts of the globe. The Earth coating movement causes varying stresses in the crust as it approaches the equator and then moves away from it. These variable stresses cause earthquakes, the distribution of which was investigated in the Mediterranean Basin and Poland during the 750 BC-AD 2000 period. Almost the sinusoidal distribution of earthquakes with maxima and minima every 400 years was found. That is, every 400 years or so, the area adjacent to the Mediterranean Sea approaches the equator and then moves away from it, with different effects in different parts of the globe. The movement of the earth coating under stationary climatic zones causes changes in precipitation zones and drought zones on the earth area, bringing specific social effects and the occurrence of the cosmic-social cycle illustrated in the figure below. 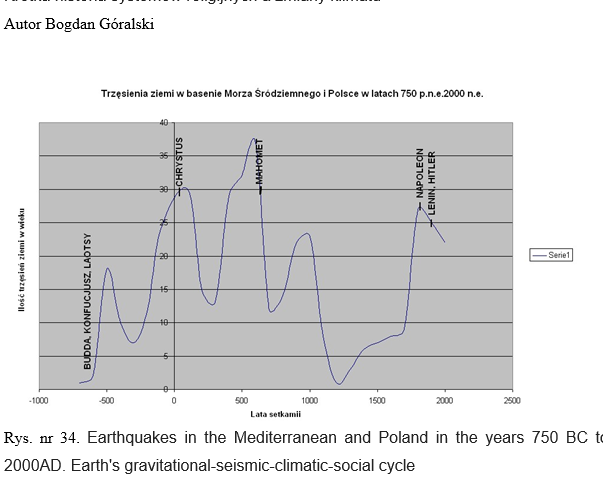 Fig.1. The Earth gravitational-seismic-climatic-social cycle described by the temporal distribution of earthquakes in the Mediterranean and Poland in the years of 750 BC to AD 2000

Great religious leaders appear in times of socio-economic crisis caused by droughts resulting from the Earth's coating movements towards the equator.

In the ages of Christ and Muhammad, Palestine and the Arabian Peninsula probably entered, after a period of increased rains favoring population growth, in a year-round drought zone between the parallels of 20-30 degrees of latitude due to the Earth coating movement towards the equator (confirmed in the graph above by earthquakes maximum of the earthquakes).

It is worth mentioning here the credible research showing that the Iranian area has shifted in the last 5,000 years from the climatic rainfall zone in summer to the rainfall zone in winter. It corresponds to the Earth linear movement of the coating towards the equator in the Iran region by about 25 degrees latitude, i.e., from the rainfall zone in summer between the 5-20 parallel to the winter rainfall zone the 30-50 parallel. The area of ​​Iran is now between 30-40 parallel, which means a shift to the equator over the last 5000 years by about 25 degrees latitude or about 3000 km. The Earth coating in the Iranian region has shifted southward by about 3,000 km in the previous 5,000 years, but this movement is likely to have had different phases in the north-south and east-west directions. The idea of changing the Iranian area comes from the study of the north magnetic pole apparent positions, which continually changes its apparent location on the globe surface. The magnetic north pole changeable position results from the Earth coating continous movement relative to the ecliptic plane.

During the Arab Empire rising, the Western Roman Empire fell, devastated by the invasion of the Germans tribes, who were driven out of northern Europe by the cold and the Mongol invasion. A similar phenomenon of earthquakes growth took place gradually in the period of AD 1000-1800 in Poland territory, which means that the area of ​​Anatolia was also approaching to the norh at that time. I explain why the increase in the number of earthquakes in Poland in the period 1000-1800 AD means the movement of the Earth's coating in the Mediterranean region to the north? Well, the African continental plate was moving to the north and under the influence of centrifugal force (the largest at the equator) it pressed the European continental plate (on which Poland is located), causing an increasing number of earthquakes. In the period 1000-1800AD climate of Europe  cooled while the area of Europe moved to the North.

This probably moved Anatolia and the Mediterranean area to transition into a climatic zone drought all-year-round. It had specific economic and social consequences for the Ottoman Empire, such as the internal crisis related to the lack of food, the disintegration of the empire, and the appearance of Mustafa Kemal Atatürk, the Turkish social reformer at the end of the crisis. The crisis of the Ottoman Empire was caused by a drought (which was found in numerous works on the climate of Anatolia) and was interfaced with the entry of the Russian area into the year-round rainfall zone between the parallels 50-60, which caused the Russian imperial expansion and its development also towards the west, which resulted in the partitions of the Republic of Poland Both Nations.

Thus, we see that the influence of the Cosmos on the terrestrial natural environment causes specific psychological and social effects that end the duration of successive empires and the formation of new ones. With this knowledge, we should notice that ​​North America again approaching the equator (which causes the effects called global warming) because of the number of earthquakes in the Mediterranean region observed by seismological observatories around the globe is increasing. On the other side of the world, in East Russia, Earth coating goes to the North direction. Therefore, we should prepare for the change in the distribution of biological forces on our planet related to climate zones displacement. It is probably that described above movement of  Earth’s coating since 1860 caused:

Partition of India into Pakistan and India,

Civil War in US.

An explanation of the above-described phenomena can be found in my book entitled The new look at the Earth's climate mechanism and the Cosmo-geophysical system of the Earth and the book entitled Historia naturalna i zmiany klimatu published freely on Google Books and Academia.edu.