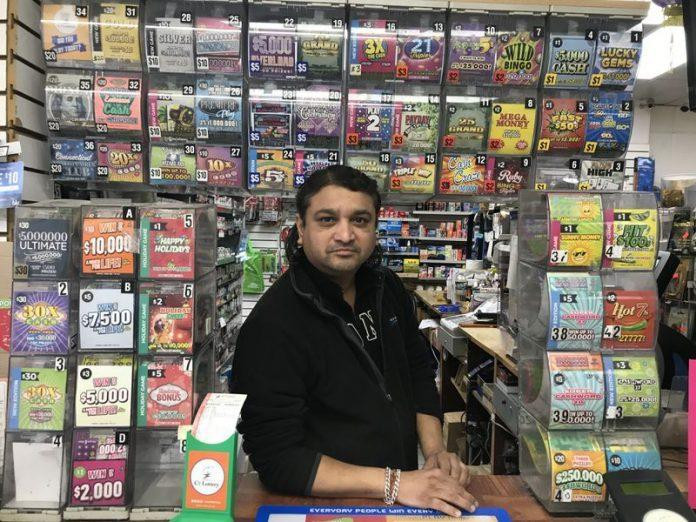 Sanjay Patel, owner of the Atlantic Market in Stamford, said his store sold more than $500,000 worth of Lotto tickets hundreds of times more than normal during the week when a British professional gambler and his associates were buying mass quantities of "Quick Pick" tickets in an attempt to win the Nov. 1, 2019 drawing for a $25.8 million jackpot. (Jon Lender / Hartford Courant/TNS)

HARTFORD, Conn. — “Good afternoon, Pete. Just letting you know that we have been monitoring the sales of an individual who is spending an enormous amount of money on the lotto game.”

That’s what Mark Walerysiak, the security director at the Connecticut Lottery Corp. (CLC), wrote in an email on Oct. 28 to Peter Hsieh, the gaming division director for the state Department of Consumer Protection (DCP).

The email was the beginning of an intriguing yarn about a professional gambler who traveled from Great Britain to Stamford in recent weeks with an audacious plan — to spend as much as $2 million buying “Quick Pick” Lotto tickets by the hundreds of thousands at local convenience stores in hopes of winning the Nov. 1 near-record Connecticut Lotto jackpot of $25.8 million.

“Mr. Bernard Marantelli of the United Kingdom is in Connecticut and is planning to spend as much as $1-2 million on tickets,” Walerysiak continued in the email. “He is currently staying in the Stamford area and has already spent about $200,000 since last Wednesday. … I spoke to Marantelli last week on the phone. He is the current CEO of Colossus Bets in the UK, a sports betting agency, and he is also a professional gambler/mathematician.

“He told me that he is planning on winning the lotto jackpot.”

Marantelli, co-founder of Colossus, which focuses on pool betting on sports and horse racing, teamed up with a half-dozen or so associates to buy Lotto tickets for hours on end at several small outlets in Stamford.

No winner has yet come forward with that ticket to claim the top prize — he or she has 180 days from Nov. 1 to do so — but things don’t look so good for Marantelli because he and his helpers were only known to be buying their tickets in Stamford, where they had hotel lodgings, not in Danbury.

But no matter who turns up as the winner, the Englishman’s unusual-but-lawful effort colorfully illustrates the realities of the Lotto game’s long odds (a 1 in 7,059,052 chance to win the jackpot) and the efforts of security officials to make sure everything’s on the up-and-up.

Those security efforts come at a time when the quasi-public lottery corporation and the DCP, its state regulator, are still dealing with recriminations about a 2015 retailer fraud scandal that forced the shutdown of the 5 Card Cash game.

The two key officials involved in overseeing the unusual ticket-buying activities are new in their jobs this year, after replacing longtime administrators who retired. But both have had long law enforcement careers. Hsieh served as a special agent in the FBI and Walerysiak as deputy police chief in Meriden.

Marantelli and his associates went about their business without attracting any public notice in Stamford — and their story is surfacing here for the first time, after Government Watch obtained security memos via a public records request.

The lottery agency learned of Marantelli’s effort from the gambler himself. He approached the CLC in hopes that special arrangements could be made for him to buy tickets in huge batches.

“He initially asked if CLC would be able to set up additional terminals at lottery headquarters (in Rocky Hill) to accommodate him,” Walerysiak wrote in the Oct. 28 email to Hsieh, “but I told him that we could not because we need to treat him just like any other customer. He was told that he could use any of our 2,900 retailers to buy his tickets.”

“Marantelli was very cordial and understanding in my conversation with him,” Walerysiak wrote, adding that “we are getting automated updates and alerts on the retailers he is using and the amount of cash he is spending.”

He said he and his people would “continue to monitor” the situation, and on Oct. 31 he sent an email to several officials, including Hsieh and Lottery Corp. CEO Gregory Smith, saying, “Each day I will be updating you all on the Lotto transactions by Bernard Marantelli.”

Walerysiak then listed increases above normal Lotto ticket sales for the previous day, Oct. 30, at seven Stamford stores he believed the Marantelli team was using. Of those, Park View Variety at 233 Main St. and Atlantic Market at 209 Atlantic St. had the biggest increases above their normal daily Lotto sales levels ($110,000 and $65,000 above normal, respectively).

He also included an eighth ticket outlet on his list — the CLC headquarters in Rocky Hill, where customers not only can cash big winning tickets, but also can buy them. Marantelli was also buying tickets at the headquarters, where Lotto sales for Oct. 30 were $25,000 above normal, Walerysiak wrote.

Nobody outside of Marantelli and his circle knows exactly how many tickets he purchased, and so far he’s not telling. But one indication is that the weekly Lotto ticket sales volume at Atlantic Market alone increased from the normal level of $1,000 or $1,500 to more than $519,000 for the week that ended Nov. 2, the day after the $25.8 million jackpot drawing.

“I’ve never seen anything like it,” Atlantic Market owner Sanjay Patel said Thursday. He said in the 14 years he’s owned Atlantic, plus another decade of working in a similar store, the most he’s seen any customer buy for any Lotto drawing was about $500 worth of tickets.

Patel said that Marantelli or one of a few helpers who came to Stamford with him spent two weeks or more coming to the store daily carrying cloth bags filled with cash, often $20,000 at a time. They would ask for “Quick Picks,” an option in which the electronic Lotto system randomly chooses the six numbers instead of the player filling out a paper slip to select his own, which is time-consuming.

“Quick Pick” tickets come out of the lottery terminal with lightning speed. Five lines of six numbers can be printed on each ticket (making each such ticket cost $5) and it takes only about four minutes to print 500, Patel said. Marantelli or his mates would leave for a few hours while a $20,000 batch was printed, and then return to take them away, neatly stacked in the kind of rectangular plastic boxes you can buy at a CVS or Walgreens, Patel said.

Marantelli is an affable fellow with a good sense of humor, Patel said, adding: “He’s very smart” and “can talk about any subject.” The gambler’s associates, all with accents that sounded British to Patel, also were pleasant and polite. Marantelli had left Stamford by Thursday, when Government Watch visited the store, Patel said.

But he said a couple of the gambling CEO’s helpers remained in town, and had left a box containing a stack of more than 5,000 tickets they said were winners ranging from $2 (for getting three of six numbers right) to $50 (for getting four numbers right). Larger winning amounts, such as $2,000 or so for hitting five of six numbers (sometimes it varies, depending on how many other players also got five out of six) must be cashed in at either CLC headquarters in Rocky Hill or another regional redemption center.

Patel said it would take him a couple of hours to run the tickets through his terminal to verify they were winners, and then pay the Marantelli associate who came back to pick up the winnings.

Marantelli, the enigmatic sportsman, turned out to be quite a sport, throwing a little party for Patel and other local convenience store owners and employees on Nov. 2, the day after the big drawing, at the nearby Bobby V’s Restaurant & Sports Bar, which adjoins a Winners OTB parlor, just down Atlantic Avenue from Patel’s store. “Bernard is a good guy,” he said.

Representatives of the CLC and DCP visited Atlantic Market during the ticket-buying binge while Marantelli or his associates were there and said it was all proper, Patel said.

According to Patel and others, the gambler and his associates were buying tickets for about two weeks prior to the winning ticket being drawn on Nov. 1. That’s about four drawings’ worth. Lotto drawings are televised Tuesday and Friday nights about 10:38 p.m. Ticket sales cease at 10:20 and resume at 10:46.

The Nov. 1 drawing of a winner sent the Lotto jackpot back down to its base of $1 million. It will grow if no one wins it, as happened in the 19 months since January 2018.

While it’s evident that the growth of the jackpot to more than $25 million attracted Marantelli to Connecticut, it remains unclear — absent any comment from him — what calculations he made in deciding it was worth the risk to buy so many random “Quick Picks.” Despite the huge number of tickets purchased, he couldn’t come close to covering all 7,059,052 possible combinations of six numbers out of a field of 44.

“Quick Picks” include the possibility (albeit not a huge one) that more than one ticket will contain the same six numbers, lottery officials say.

Patel said he believed most of Marantelli’s ticket purchases were at his store and at Park View Variety, a short walk around the corner. Other nearby convenience store owners were worried or skeptical, at least to begin with, about the group of strangers laden with so much cash, he said.

While all of that has been happening, hearings continued this past week in the whistleblower case of former lottery security director Alfred W. DuPuis. He retired a year ago when faced with potential disciplinary proceedings in connection with a million-dollar mistake made by his subordinates in the New Year’s Super Draw on Jan. 1, 2018.

The latest hearing was conducted for several hours Tuesday in Hartford by Michele Mount, the state chief human rights referee for the Commission on Human Rights and Opportunities, and at least one more such session will have to be held, lawyers for the lottery and DuPuis said.

DuPuis has complained that a charge of “gross neglect” — lodged against him in the 2018 Super Draw blunder by then-acting lottery CEO Chelsea Turner — was, in reality, belated retaliation for his role as a whistleblower about irregularities and improprieties in the ill-fated 5 Card Cash game about five years ago.

The lottery denies that, and called former CLC lottery board Chairman Don DeFronzo as a witness Tuesday. He testified that Turner had never said anything negative to him about DuPuis, and in fact had told him that she didn’t think that any of the three lottery employees whose conduct was questioned in the drawing snafu should be fired.

Turner, now CLC vice president, was herself placed on paid administrative leave July 15 from her $190,000-a-year job by lottery President/CEO Gregory Smith under a state personnel regulation that provides for “investigation of alleged serious misconduct which could constitute just cause for dismissal.”

Smith has refused to say why he did that. His action came soon after her explosive sworn testimony at a DuPuis complaint hearing on July 9 that around 2014, she contacted a friend in the FBI about what she saw as suspicious actions by Frank Farricker, then the CLC’s governing board chairman. The FBI soon had then-lottery president/CEO Anne Noble secretly record at least one conversation with Farricker, using an electronic device hidden in an eyeglass case.

Nothing came of the FBI’s criminal investigation five years ago. But the disclosure of it by Turner in July brought renewed scrutiny by legislators and the governor of the quasi-public lottery — which has been accused in recent years of abusing the special autonomy it enjoys in comparison to regular executive branch departments.

Turner still hasn’t returned to work, lottery officials say, declining further comment on what they say is a personnel matter.