The End of Ice by Dahr Jamail

The End of Ice: Bearing Witness and Finding Meaning in the Path of Climate Disruption
By Dahr Jamail
The New Press, 2019 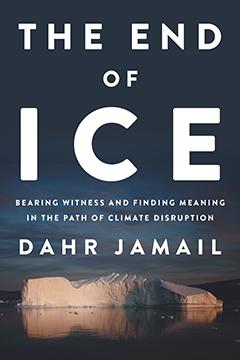 Longtime war-zone reporter Dahr Jamail turns his attention in The End of Ice to a theater of violence incalculably broader than any conflict between nations: catastrophic climate change. He journeys to a dozen of Earth’s various climatological pinch-points, places like low-lying islands or the Great Barrier Reef or the Amazon rainforest, and he interviews the scientists and other specialists who are working on the front lines of humanity’s confrontation with the emerging Anthropocene Era.

The End of Ice is of course not the first such urgent dispatch not even the hundredth, and these books don’t have happy news to report. Species are dying at unprecedented rates; each consecutive year ranks as one of the hottest years ever recorded; super-storms are increasingly common in the news and increasingly devastating in their impacts. Jamail’s journalistic skills allow him to evoke these details with a succinct power that many other accounts might lack, but the facts themselves, told to him by on expert after another, are as familiar as they are bleak:

Our planet is rapidly changing, and what we are witnessing is unlike anything that has occurred in human, or even geologic history. The heat-trapping nature of carbon dioxide and methane, both greenhouse gases, has been scientific fact for decades, and according to NASA, “There is no question that increased levels of greenhouse gases must cause the Earth to warn in response.” Evidence shows that greenhouse gas emissions are causing the Earth to warm ten times faster than it should, and the ramifications of this are being felt, quite literally, throughout the entire biosphere.

The stark reality of these kinds of books is that there’s no happy ending. Despite sporadic peppy reports from various national and tech quarters, the damage is already done and the momentum is already largely uncontrollable. The more examples of this type of book appear, the darker their horizons tend to get; their central point has slowly migrated from ‘what can be done to stop this?’ to ‘how can we live with the worst of how bad this will get?’ This transition can be seen in the subtitle of Jamail’s book, which can only promise bearing witness and finding meaning, not making anything better, not somehow avoiding the coming nightmare.

Even in the book’s most optimistic moments, this sere tone remains. At one point Jamail is climbing in his beloved Olympic Mountains when he finds a small tree striving to live high up on the mountainside. “Two thousand feet above the natural tree line, it endures subzero temperatures for much of the year, is blasted by hurricane-force winds, and is buried beneath several feet of heavy Pacific Northwest snow,” he writes. “Yet here is this tree. Growing. Living.”

He continues in the only way now left open to such authors:

To bend but not break when the winds blow. To grow from the rain. Life persists given even the slightest chance. In the future, natural life on Earth will be quite different than it is now, but it will survive just fine. It’s just that, [as one expert told him] humans may not be around to see it.

It’s a testament to the current state of affairs that even this kind of ‘the planet, but not us’ conclusion is starting to feel optimistic.

—Steve Donoghue was a founding editor of Open Letters Monthly. His book criticism has appeared in the Boston Globe, the Wall Street Journal, The Spectator, and the American Conservative. He writes regularly for the National, the Washington Post, the Vineyard Gazette, and the Christian Science Monitor. His website is http://www.stevedonoghue.com.