US Meddling in Venezuela Regime Change

After 2 years of investigation into Russian meddling into US elections, reporter, Max Blumenthal arrives at Capitol Hill to ask members of the US Congress if they think the US is meddling in Venezuela's political system.

The Trump administration recognized the president of the country's National Assembly, Juan Guaidó as interim president to replace Maduro and has intensified sanctions against Venezuela. 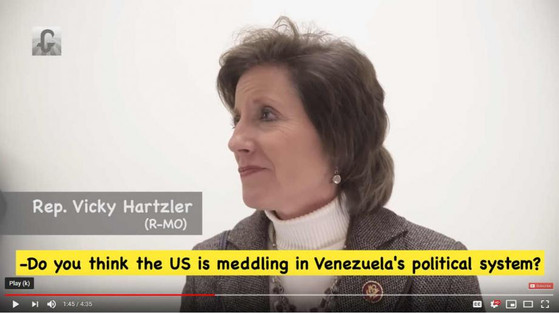 CIVIL UNREST IN VENEZUELA IS FAKE NEWS MADE IN USA

A Reporter's Diary From Venezuela: "Insolent American Bastards Should Be Hanged On The First Tree"

The following morning, no one at the hotel wants to look at my dollars.

The hotel employee tells me to go to one of the official “exchange stores” but honestly adds: “only Americans, or complete jerks go there.”

In Venezuela, the official dollar exchange rate is 200 bolivars, and the “black market” exchange rate is 2,715. And if you exchange your currency in a bank, then according to this calculation, a bottle of ordinary water will cost 330 rubles, and a modest lunch in an inexpensive cafe—7,000 rubles per person. Judging by the stories on the Internet, in Venezuelan people should simply kill each other for dollars, but this is not the case.

There is also other things different from perception. On western news, it is shown that demonstrators fight with police daily, tens killed, hundreds wounded, the sea of blood. But in Caracas, all is quiet. In an afternoon, people are sitting in cafes and idly sipping rum with ice, while maintenance crews sweep the streets. It turns out that the world ‘s leading TV new sources (including CNN and the BBC) show some fantasy film about Venezuela. “Demonstrations?” yawns Alejandro, a street vendor selling corn. “Well, Saturday there will be one, sort of. On one end of the city will be a rally of opposition supporters, and on the other, Maduro supporters. The police keep them separate to prevent fights.”

Amazing...You browse the Internet, you turn on the TV, and you see the revolution, the people dying on streets to overthrow the “evil dictator Maduro.” And you come here, and nobody cares.
https://www.zerohedge.com/news/2019-02-09/reporters-diary-venezuela-insolent-american-bastards-should-be-hanged-first-tree

CARACAS, Venezuela—Goldman Sachs Group Inc. bought about $2.8 billion in Venezuelan bonds that had been held by the oil-rich country’s central bank, a lifeline to President Nicolás Maduro’s embattled government as it scrambles to raise funds in the midst of (ALLEGED) widening civil unrest.
https://www.wsj.com/articles/goldman-sachs-bought-venezuelan-oil-co-bonds-last-week-1496020176

Why Goldman Sachs Just Made An Embarrassing Bet On Venezuela

Goldman Sachs bought previously issued bonds for Venezuela’s national oil company, PDVSA, on Monday. They were worth $2.8 billion, but Goldman bought them at a steep discount of only $865 million because of the (ALLEGED) severe political and economic instability of Venezuela. Goldman Sachs, apparently, was unaware that: 1) Historically, when a political party is forced out through revolution, coup, or other extralegal means, the new government does not always pay the debts incurred by the old one, and 2) It is strategically beneficial to the opposition party in Venezuela to deny payment to Goldman Sachs.
https://www.forbes.com/sites/ellenrwald/2017/06/01/why-goldman-sachs-just-made-an-embarrassing-bet-on-venezuela/#7640e264f857

Racism And The Fight Over Venezuela

The U.S. coup attempt in Venezuela is not only about oil and general U.S. imperialism. It is attempt to bring a specific type of people back into power. The same type of people that rule in Washington DC.

The Nation describes how the U.S. has long funded and manipulated the opposition in Venezuela. The Random Guy™ Juan Guaidó, who claims the presidency, was created through this process:

The piece includes this revealing sentence:

A former USAID/OTI member who helped devise US efforts in Venezuela said the “objective was that you had thousands of youth, high school, and college kids that were horrified of this Indian-looking guy in power. They were idealistic.

Being "horrified" that the "Indian-looking" Hugo Chávez was in power does not seem "idealistic". One might call it racist though. A number of those white, well off, U.S. trained college kids joint politics in right wing parties. They wanted to take power. But to sell one of theirs as a leader of a country where the majority is mestizo was a problem.

To solve that problem the Random Guy, despite being known only by 20% of Venezuelans, was selected to lead the U.S. coup attempt:

A figure named Juan Andrés Mejía would have been next in line but for reasons that are only now clear, Juan Guaido was selected.

“There is a class reasoning that explains Guaidó’s rise,” Sequera, the Venezuelan analyst, observed. “Mejía is high class, studied at one of the most expensive private universities in Venezuela, and could not be easily marketed to the public the way Guaidó could. For one, Guaidó has common mestizo features like most Venezuelans do, and seems like more like a man of the people.

Guaido is a stand in. He was selected because he somewhat looked like the majority of the people of the country.

The two pictures below further demonstrate the role race plays in the conflict in Venezuela.

Venezuela currently has two assemblies that claim the right to legislate. In 2015 the opposition won a majority in the National Assembly, the original parliament of Venezuela:

However, the Venezuelan Supreme Court barred four lawmakers from taking their seats while it probed allegations of electoral fraud. As a result, only 163 of the 167 lawmakers were sworn in on January 5. The next day, three opposition deputies were sworn in over protests by members from the legislature’s minority who announced their intention to challenge the move.

There is a visual difference between the two assemblies:

Opposition legislators of the National Assembly 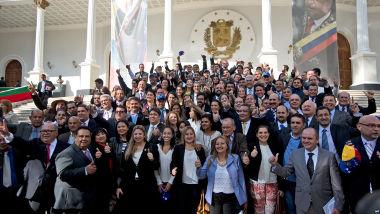 Via VOA - bigger
Members of the Constitutional Assembly 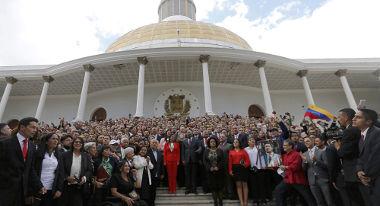 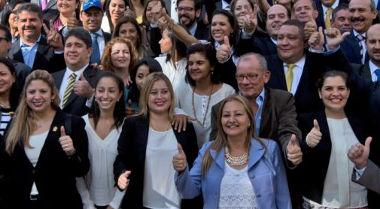 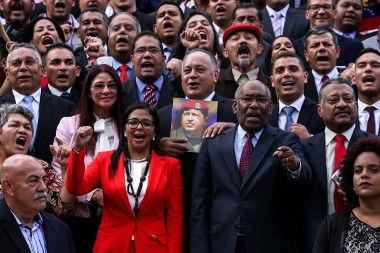 The rich in Venezuela are overwhelming white people. They long ruled the country. The mestizo majority are the poor. Hugo Chavez brought them to power. The white people want the power back.

This obvious racist aspect of the conflict is missing from the general reporting of the issue. It only comes to light in the published visuals.

The race conflict is of course not unique to Venezuela. In the U.S., especially under Trump, racism is also prevalent. It is, I believe, the subliminal reason why the U.S. ruling class is joint in the effort to regime change Venezuela.

US Meddling: Is Venezuela Next?
https://venezuelanalysis.com/analysis/14084

$100 Oil Is A Distinct Possibility

Put it all together, and “the likelihood of an oil spike and crash scenario akin to the one observed in 2008 has increased,” Bank of America Merrill Lynch wrote in a note. BofAML has a price target for Brent at $95 per barrel by the end of the second quarter 2019. In 2008, Brent spiked to nearly $150 per barrel.

The supply picture is looking increasingly worrying, with Venezuela and Iran the two principal factors driving up oil prices in the fourth quarter. Notably, the bank increased its estimate of supply losses from Iran 1 million barrels per day (mb/d), up from 500,000 bpd previously.
https://www.zerohedge.com/news/2018-09-25/cunningham-100-oil-distinct-possibility

COLOMBIA REFUGEES CAUSE VENEZUELA REFUGEE CRISIS - PRIMED FOR US EMPIRE TAKE-DOWN
5/13*US 4th FLEET GULF WAR *!*THE TRUTH YOU AREN’T BEING TOLD!
https://youtu.be/ElvEhvvzJ_4?t=1m36s

HAWKS: Haley, Pence Convey US Message on Venezuela: Only Election Worth Holding is One that Results in Regime Change
https://mintpressnews.us5.list-manage.com/track/click?u=3b33b8b02bdc833e727219156&id=46361c2dc0&e=daad6ccd1c

IS US MILITARY SPONSORING COLOMBIA WAR WITH VENEZUAELA?
Venezuela fears ‘invasion’ after U.S. military chief visits Colombia
February 12 - Venezuela on Monday accused neighboring Colombia of planning a bombing campaign or a “military invasion” amid heightened tensions in the region and a mass exodus fueled by Venezuela’s collapsing economy.

“In Colombia, they are planning to revive eras that had ended in human history, like military bombing, a military invasion or the occupation, through blood and gunfire, of a peaceful country like Venezuela,” said Venezuela’s chief prosecutor, Tarek William Saab, according to the state-run AVN news agency. “We will not allow it.” Saab didn’t provide proof of his allegations, but other regional allies pointed to the weekend visit to Colombia by Admiral Kurt Tidd, head of U.S. Southern Command
http://www.miamiherald.com/news/nation-world/world/americas/venezuela/article199715099.html

Some Jews Are Not Jewish Enough For Israel - Venezuelan Jews Barred From Immigrating to Israel Because 'They Don't Belong to a Jewish Community'
read more: http://www.haaretz.com/world-news/americas/.premium-1.762617

Earthquake engineered with nuclear explosives in Haiti resulted in vast oil reserves exceeding those of Venezuela. Listed from minute 4:45.
https://youtu.be/BO4zw_dJScM

US and Colombia Plan to Attack Venezuela -- By Eva Golinger
www.globalresearch.ca/index.php?context=va&aid=20271

1/21/2010 - Obama has authorized a covert economic war against Venezuela in order to destabilize the government of President Hugo Chavez.
http://onlinejournal.com/artman/publish/article_5489.shtml

For China there's also an "escape to South America" option. In the Venezuelan overall strategy it's essential to sell more oil to China so as to lower its heavy dependence on the US market. According to the existing terms of the China-Venezuela partnership, four tankers and at least two refineries will be built - one in the immensely oil-rich Orinoco Belt in Venezuela and the other in Guangdong. State-owned Petroleos de Venezuela (PDVSA) will be responsible for shipping the oil to China.
https://web.archive.org/web/20180504141829/http://www.atimes.com/atimes/Central_Asia/KL24Ag07.html