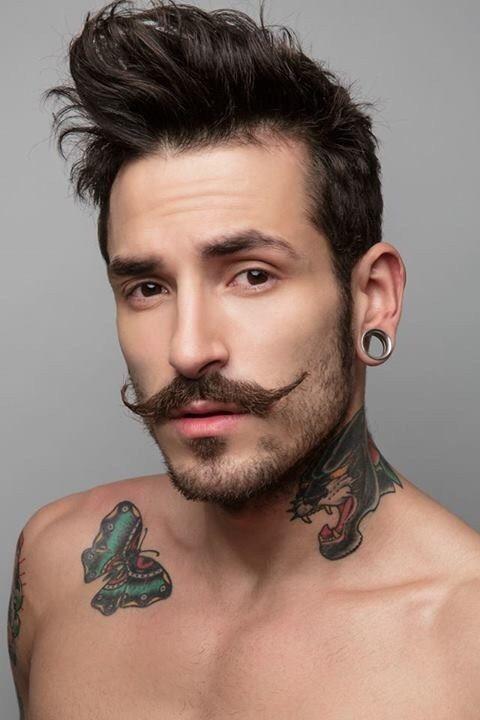 Today's man seems to embrace a smooth cheek achieved by a Gillette razor but where have all the mustaches gone? I've seen men with beards, those who have stubble, some will sport a goatee, others might try muttonchops or even a van dyke but what happened to the mustache? There is nothing more impressive than a guy rocking a full, thick, hairy mustache. These are my top five favorite actors who display an amazingly hairy upper lip best hairstyle to go with the soul patch and curled mustache.

5. Dabney Coleman
I have never seen him without a mustache; I am pretty sure that he was born with one. You may have spotted Dabney Coleman's mustache in 9 to 5 with Dolly Parton, Lily Tomlin and Jane Fonda. It reappeared when co starring with Tom Hanks in The Man with One Red Shoe and years later when reuniting with Hanks in You've Got Mail. My first encounter with his whiskery lip was in Cloak and Dagger, where Dabney and his mustache play two roles in the film. The first is Colonel Osbourne, the rather absent father of main character Davey (E.T.'s Henry Thomas), and the second as Davey's imaginary friend, super-spy Jack Flack. The plot involves the murder of a federal agent, a video game (where the film gets its name), and Davey's relationship with his imaginary hero/real-life father. The real star, though, is the mustache- Coleman has a tried and true look and I am glad that he has kept it for so many years.

4. Burt Reynolds
He's been rocking the 'stache since the 70s and it's still going strong. From Smokey and the Bandit and Cannonball Run, to more recent films like Boogie Nights, Mystery, Alaska and Dukes of Hazzard, the moustache is as much of a presence as the man who wears it.

In Smokey and the Bandit, Reynolds's job, as the Bandit, is to lure the cops away from investigating the contents of his accomplice Cledus's (Jerry Reed) big rig. The two are headed to Texarkana to illegally load a semi full of beer and bring it back across state lines. Along the way, Bandit picks up runaway bride, Carrie (Sally Field). In hot pursuit of Bandit is Sheriff Buford T Justice (Jackie Gleason) who was slighted when Carrie ran out on his son.

Whatever the role, Burt Reynolds never disappoints when it comes to putting his best face forward, especially if his mustache is involved.

3. Kevin Kline
I fell in love with Kevin Kline when I saw him in French Kiss. It may have been the mustache or it could be that he is just so dreamy. As Kate (Meg Ryan) flies to France to win back the affection of her former fiancée, she runs into Luc (Kevin Kline). Luc has a sordid past and is secretly using Kate to smuggle diamonds into the country. He aids Kate in her attempt to reunite with her lost love, but he is really just trying to get back his jewels. Or is he?

In his more recent films he is sans mustache but if you are longing to be captivated by his formerly fuzzy face, I would suggest checking out A Fish Called Wanda, Silverado, The January Man or the slightly more obscure Pirates of Penzance.

2. John Ratzenberger
He is otherwise known as Cliff Clavin, the lovable postman from Cheers. Cliff is always to be found sitting at the end of the bar in his work uniform, downing a mug of beer with his good friend Norm. Cliff is lonely, middle-aged and still lives with his mother, which makes him the butt of many jokes mainly dished out by Carla, the short fused waitress. His "bar know it all" comments always keep you coming back for more with, leading with "it's a little known fact... " His portrayal of the famous postal carrier has even made his way into other TV series such as Wings, St. Elsewhere, The Simpsons and Frasier.

Even though John's mustache does not frequent the screen in a lot of TV or film, when he lends his voice to family favorites such as A Bug's Life's P.T. Flea, Hamm the piggy bank in Toy Story, construction foreman Tom from Up, and just about any other Disney Pixar film that has come out, you instantly think of that face and of course that mustache.