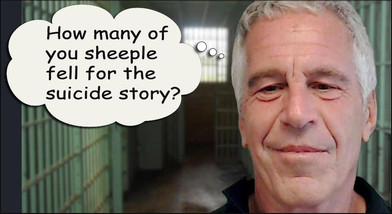 Epstein was "Switched", Not "Hung"

DAILY MAIL 2/5/2020:  Judge demands answers from Jeffrey Epstein’s estate after millions of dollars flood into his dormant offshore bank in the Virgin Islands in the months following the pedophile’s death.

BOMBSHELL! Prison Eye-witness Says Epstein Was Released Alive in a Wheelchair at 4:15 AM on Day of Alleged Suicide (SOTN) 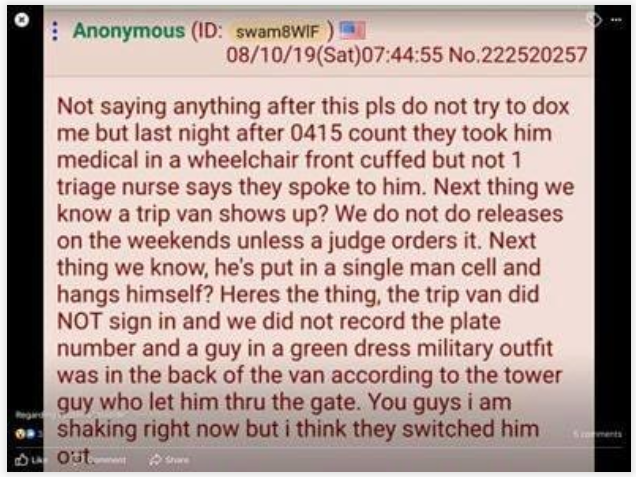 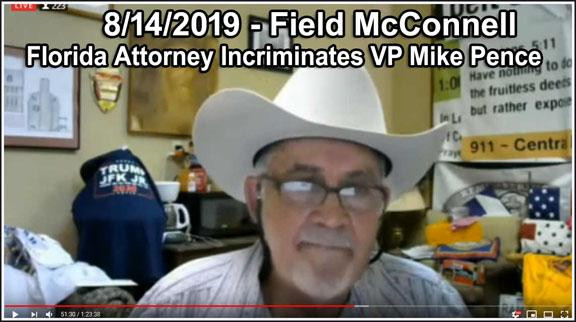 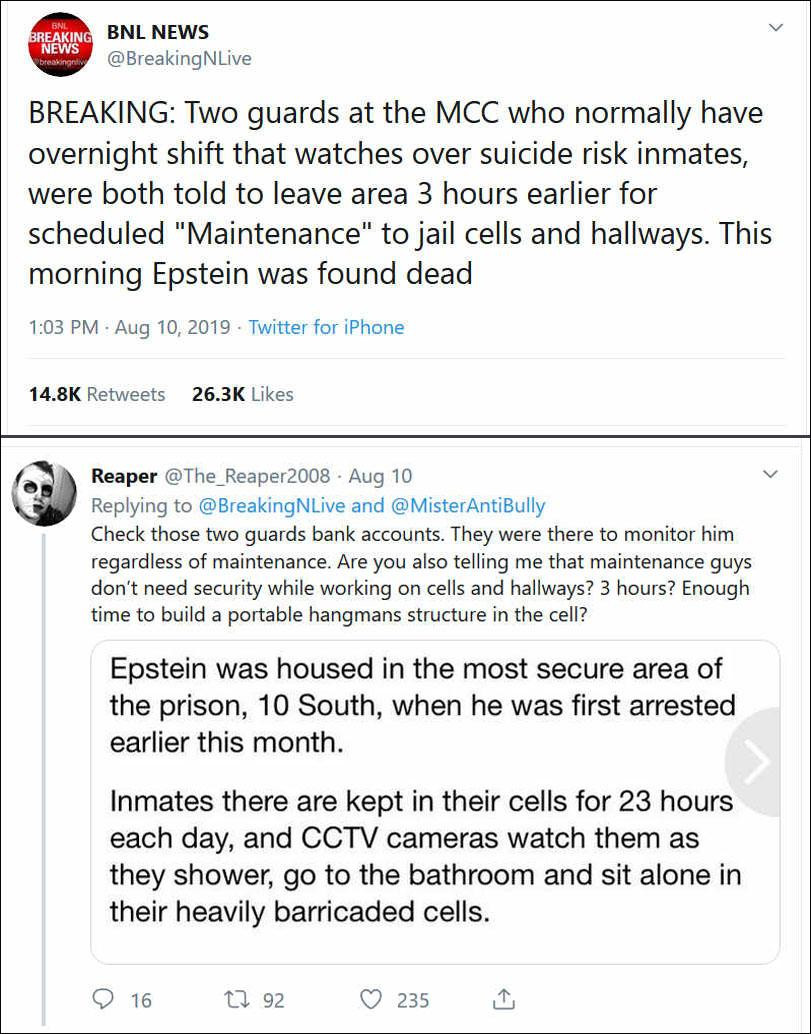 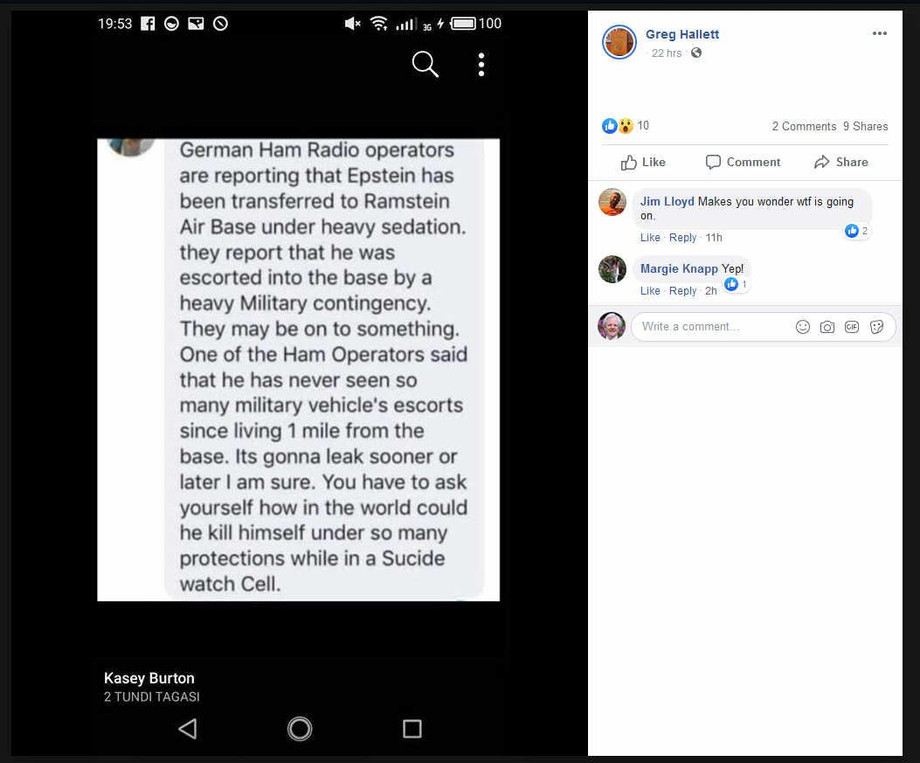 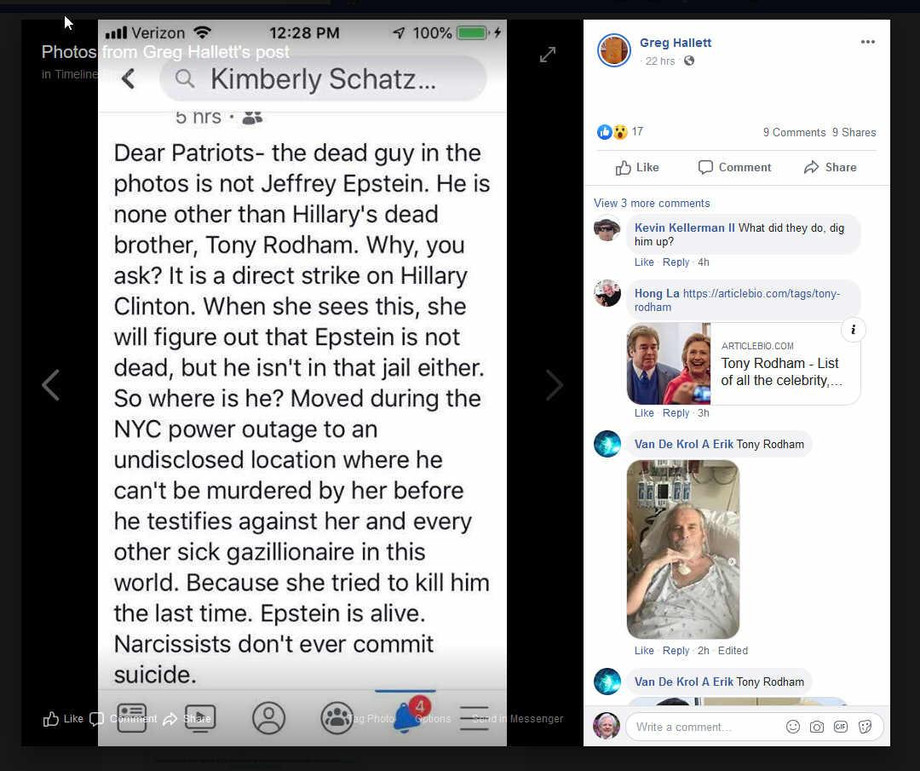 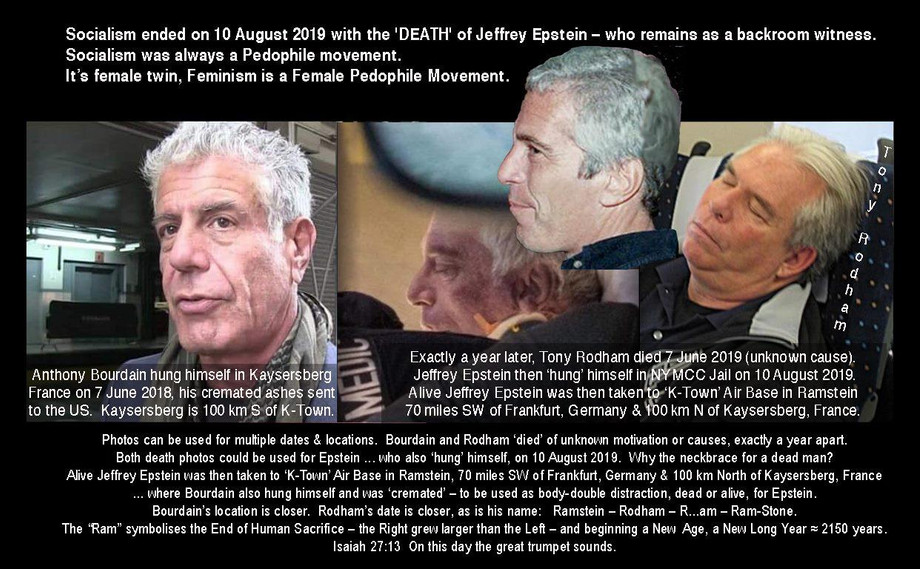 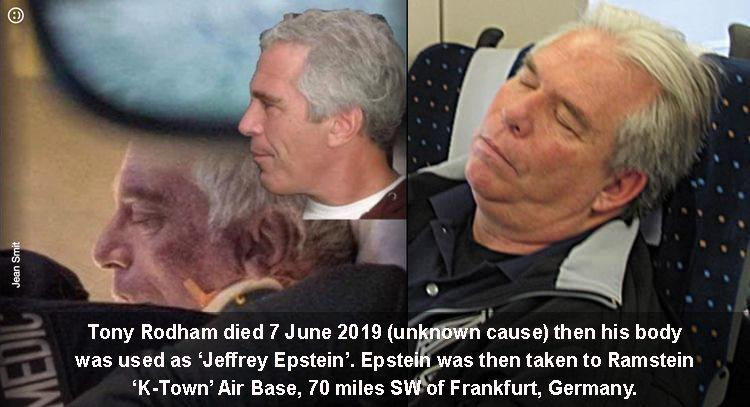 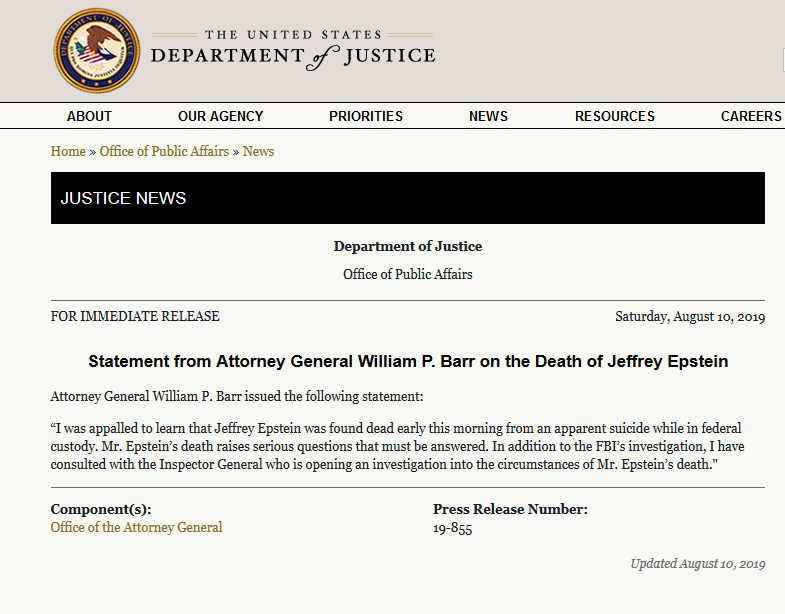 The 64,000$ Question: Is Jeffrey Epstein "safe" in military custody at US Ramstein Air Base or on his way to Israel with Trump's blessing?

ROBERT STEELE: Charles Huge Smith is an enormous talent combining intelligence, integrityandimagination, and other than coming at the tail end of months of crap and cover-up by every else, his piece touches on one important factor – at the end of the day, when all of the Epstein-Maxwell-Mossad-CIA-FBI-NSA-DoJ high crimes are known, combined with 9/11 full disclosure, there will be a 2nd American Revolution that will stampede over the incumbent President if he does not keep up. Our President is on the verge of losing a majority of his base and could be challenged in 2020 by a well-funded transpartisan Republican, transpartisan Libertarian, and transgender Democrat. This will not be pretty.

Our President is losing momentum and I believe it is a huge mistake to not integrate #UNRIG into his playbook now, to accompany his forthcoming economic and free energy disclosures. See below my original matrix on preconditions of revolution, all of which exist in the USA. The President’s team does not do grand strategy, holistic analytics, or true cost economics. They do not have a complete grasp of both the fault lines and the opportunities inherent in each of these preconditions. 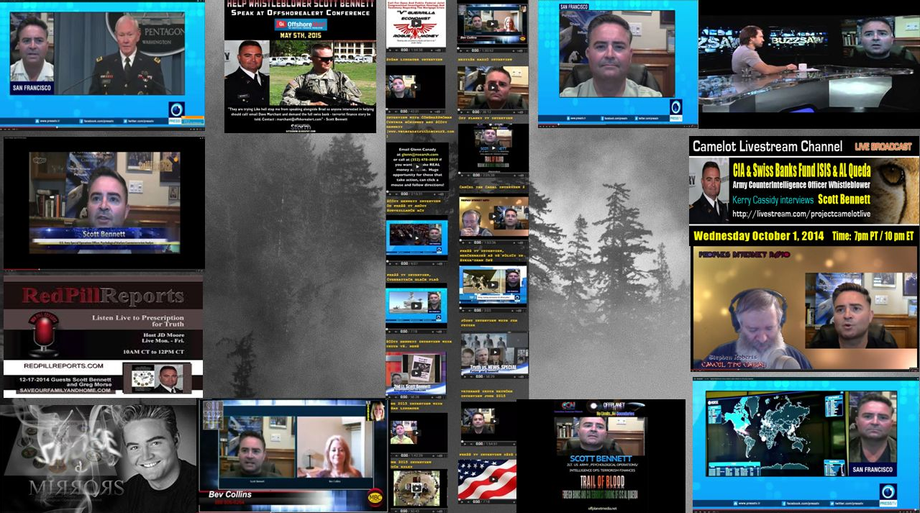 "Watch Israeli TV for better info on this.

Epstein is one of the Likudists greatest heroes since he provided very good human compromise materials in video form. On his island and ranches he also had occult child sacrifice (Baal/Moloch) worship ceremonies for the higher ups who need to be controlled more.

There were several video cameras and two 24 hour live watch guards at the most secure jail in NY, it couldn't happen. The SSG is so out of control that and blatantly aggressive that this could be expected. Was taken to the hospital and left. His financier Wexler claimed Epstein embezzled his funds and now with Epstein supposedly dead, he can make big claims against the Epstein funds/holding so it won't go to the USG. The civil cases can proceed and Wexler will get his money afterwards.

Epstein will be taken to a plastic surgery center in Switzerland run by Khazarians to have some work done on his ears, teeth and face. Wexler ran the op and Giselle was his handler. This is a MEGA run op, one of many. Research MEGA and you will understand.

Note that the top world expert on human compromise ops is Detective James Rothstein (NYCPD Gold Shield, retired) who has been known for over 25 years. Check out all his videos on Sarah Westall Business Game Changers and you will learn how deep this runs. My city is completely controlled by human compromise ops, fact not conjecture. That is why they are so important in DC and NYC, and the COL and the Vatican.

History is moving to its conclusion fast. And as it runs to its conclusion with evil and the antichrist winning for a short time, then being destroyed as Jesus returns, how good it is to be a child of the living God through Jesus Christ our Lord and Savior."

By Whitney Webb -- The picture painted by the evidence is not a direct Epstein tie to a single intelligence agency but a web linking key members of the Mega Group, politicians, and officials in both the U.S. and Israel, and an organized-crime network with deep business and intelligence ties in both nations.
.
YOUTUBE: James Rothstein
.

SCOTT BENNETT: Fyi, this guy James Petrucci was the same warden at my prison, when the Obama regime "disappeared me" for reporting they (CIA Brennan, Hillary, and Eric Holder and Rene Alexander Acosta were financing terrorism thru Saudi and Qatari Swiss banks, who I name in my book "SHELLGAME" www.shellgamewhistleblower.com

Petrucci was former Army, and very interesting.
See article below. Truth is stranger than fiction.

WASHINGTON (Reuters) - The U.S. Justice Department said on Tuesday it was shaking up staffing at the federal jail where financier Jeffrey Epstein died over the weekend while awaiting trial on sex trafficking charges, announcing it had temporarily assigned a new warden and placed two corrections officers on administrative leave.

Kerri Kupec, a department spokeswoman, said that James Petrucci, the warden at Federal Correctional Institution Otisville in New York, has been named acting warden at Metropolitan Correctional Center pending the outcome of investigations by the FBI and Inspector General into Epstein’s apparent suicide.