Power-Pronation became an intriguing concept for me when I started analyzing the throwing motion of wheelchair athletes. These athletes have significantly greater difficulty in rotating their upper body when attempting to throw a ball or swing a tennis racket with only a minor contribution from their lower body due to Newton’s 3rd Law (Action - Reaction).

By supinating their wrist as they draw their arm back to throw, they engage the biceps muscle, which provides added power to the throw. The act of supination also stores rotational energy in the forearm similar to the twisting and then release of a rubber band. As their arm proceeds forward to the release point, the arm “naturally” pronates without the type of “over-pronation” seen by this former Cy Young Award winner below: 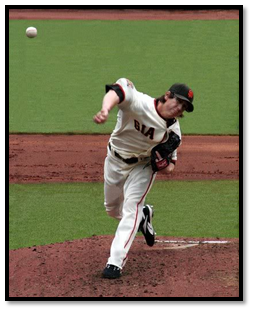 Interestingly, supination prior to pronation provides an added measure of stability to the elbow as we will see later in this article.

As the arm pulls back, in preparation to throw, the external rotation of the forearm places a force of approximately 60 pounds on the inner elbow as measured in experiments conducted by Glenn Fleisig, Ph.D. at the American Sports Medicine Institute (http://www.asmi.org): This for adult pitchers throwing in the range of 85 – 90 mph (with the force steadily increasing with added mph). 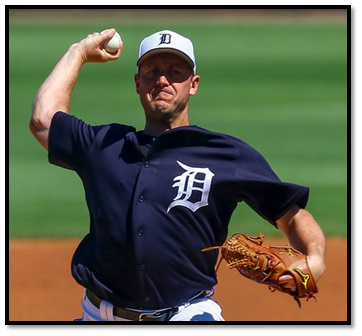 The degree of this force on the elbow and so-called Tommy John ligament in particular, can clearly be seen here as the hard-throwing Detroit Tigers hurler externally rotates his pitching arm in anticipation of the throw to the catcher.

Power-pronation supinates the forearm during this process of external rotation reducing the strain on the inner elbow (by activating the biceps muscle) as the pitching arm moves forward (and rotates internally). In strength experiments using a device called a wrist dynamometer (and similar devices) it has been determined that supinator muscles (e.g., the biceps brachii) produce 25% more internal torque (isometric force across the elbow and forearm) than do pronator muscles (such as the pronator teres). The biceps therefore absorbs some of the force exerted on the elbow as it rotates externally.

Perhaps of greater significance to throwing a ball with power is the fact that supinating the wrist prior to pronation allows for the highest degree of pronation torque and therefore ball velocity (and spin). This result may be better appreciated as follows: it is well-known that the force of contraction of a muscle is reduced as it shortens and increased as it stretches. When the wrist is supinated the muscles of pronation are stretched and therefore capable of greater contraction as the wrist moves from supination to pronation (as it does during the process of Power-pronation). For example, the pronator teres muscle (used in pronating the forearm) is stretched as its antagonist muscle the biceps brachii is activated (i.e., contracted) by supination.

In summary, by activating the biceps muscle group (prior to release of the ball) during the activity of throwing a ball (baseball/softball and football) two important conclusions are drawn: (1) Strain is reduced on the inner elbow (location of the Tommy John UCL ligament) and (2) The ability to generate a pronated release of the ball is enhanced by supination. This process I will refer to as Power-pronation Figure 2. 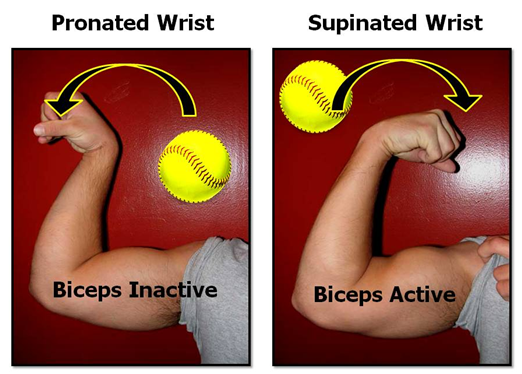