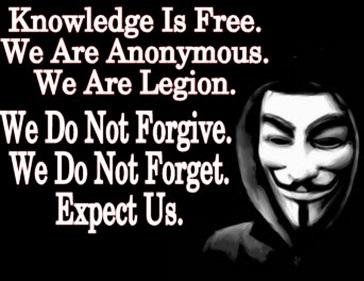 We fight all the sociopaths trolls on the Steemit SCAM!

Don't forget to look at the bottom of this page our very interesting special 'delicious' report about the top Steemit abuser: @abusereports

#45: This new year is starting with some big problems for steemit!! They forgot to tell you? How is it possible?? They are so 'honest'!!

#44: Happy New Year to all honest people!! And a Very Bad New Year for all the trolls, sociopaths and scammers! Will the scam Steemit will survive one more year? More people are going away from this scam!!

#43: Today september 1, another success, we have shut down Steemit !! 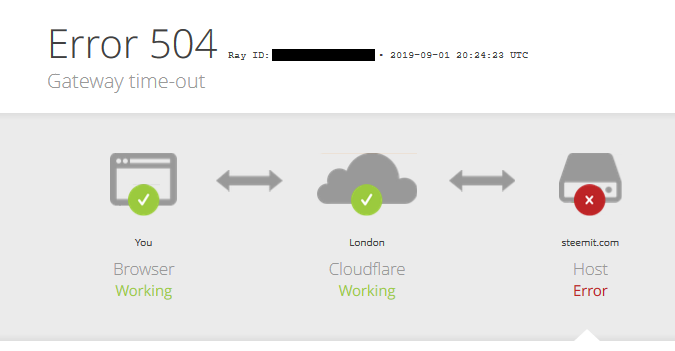 #42: November 17, 2019. Let's see how Steemit is acting. John upvotes Peter => John earns 'money' and Peter earns 'money'. Hummm... It sounds weird... Peter upvotes John => Peter earns money and John earns 'money'. Yes, it's more than weird! It looks like a ponzi. Where does this 'money' comes from?? Even if Steem value is increasing, it does not explain why more and more Steems are distributed among members. When an account is created, it receives a 'delegation'. One more time, Steems are created on demand. This is NOT SUSTAINABLE. It really looks like a ponzi where 'money' is artificially created in order to avoid a collapse. Anyway, this ponzi-like cannot last. It's unfair, cheating and not honnest.
Maybe you think that miners/witnesses are creating Steems? Not at all. They are PAID because they manage the blockchain processes but they DO NOT CREATE Steems.
Are you looking closely at https://steemblockexplorer.com/@steem ? For some months, Steemit is undelegating more and more unused accounts. Finally, they have understood that their weird system is collapsing? They were hoping that Steem will have such a big succes that they will stop to act like a ponzi and move on to a real honest business?? This cheating strategy was planified since the beginning? Most certainly.
So, for some months, Steemit is getting back a lot of Steems sleeping on unused accounts. But, it's not enough!! Steemit needs more and more Steems and cannot create indefinitely more and more Steems! The situation is becoming very very critical!! So critical that since the beginning of this month they have stopped to valid new accounts! A few accounts have been created but they were validated before this month.
On the other hand, Steemit is claiming more and more accounts because they MUST create more and more new accounts. Can they admit they cannot create more accounts because they lied to their members about the way they create Steems on demand?? Sure, they can't do that. They will never admit that their fake cryptocurrency is acting like a ponzy since the beginning.
So, Steemit needs more and more Steems which they stopped to create artificially. In brief, Steemit and its fake cryptocurrency will collapse. It's just a question of time.

#41: As commented below at https://steemit.com/steem/@steemitblog/blockchain-update-platform-independent-state-files most of the rewards are going to some closed circles abusers. It's unfair and it shows that Steemit will never success. Steemit is a chimera abusing their naive and credulous members.

Unfortunately, most of the sociopath trolls are part of these famous closed circles, abusing other members for unjustified reasons.

Tell what for think about Steemit and you will be harrassed by these sociopath trolls. Is this free speach? Is it fair?

More about the viability of Steemit:
* Less of 50% (very very optimistic statistics) of new members are activating their accounts and more of 90% new accounts will never be effectively used by their owners...
* Most of active accounts will stop to be active after 2 years. They understood that Steemit is only a dream for naive and credulous victims.
* After 3 years, Steemit has still not replaced all of the real social networks like some stupid fans are still claiming.
* Steemit is a centralized system, not a real blockchain.
* STEEM will never be recognized as a real cryptocurrency.

#40: Today september 1, another success, we have shut down Steemit !! 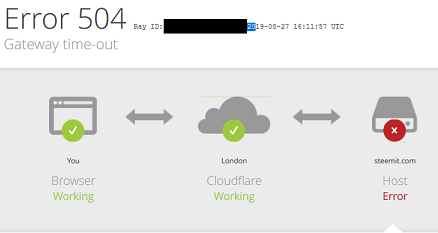 #37: Today we shut down steemit website one more time!! 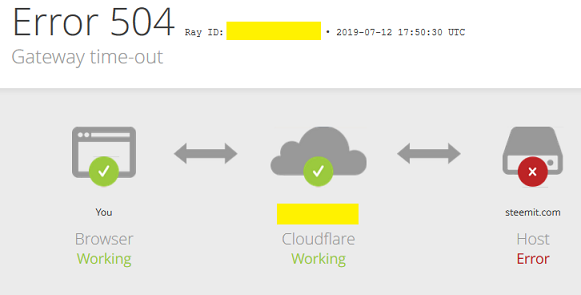 #33: Latest news:
1: Steemit needs fresh real money so it needs more members but more members means more steems to delegate.. And new members are hesitating to put real money in this fake cryptocurrency. It's a vicious circle and it's smelling like a ponzi scheme.
2: POWER DOWN, POWER DOWN and POWER DOWN!! As soon you earn some steems, Steemit undelegates the same amount in your account.. More and more members are angry.
3: Accounts left 2 months or more are fully undelegated. Steemit really needs more money! After more than 2 years, the admins finally understood that producing STEEMS every time they need will result in a decreasing of its value???
4: STEEM has never been recognized as a cryptocurrency by thecryptocurrency community because STEEM looks like a ponzi scheme with a centralized blockchain. Miners are more working for this poor stupid ridiculous social network than working for mining the STEEMS.
5: New members wants to test before 'investing' real money. With a free account with delegation, they can post interesting contents during months for earnings only dust, expecting some small rewards from whales. YOU WILL NOT EARN ANYTHING WITHOUT SPENDING YOUR HARD EARNED MONEY IN THIS SCAM.
6: Small rewards are still not paid maybe because the STEEM value is decreasing after the 7 days... ?
7: Every day, the value of STEEM is dropping, dropping and dropping! Soon the end?

#32: A Steemit influential member reveals his deep disappointing about Steemit, the admins and their utter contempt of the members : https://steemit.com/steem/@jesta/the-recent-controversy-between-steemit-inc-and-the-community-the-premine-control-and-where-it-leads-this-blockchain

#31: Free registrations are back! Steemit needs more fresh real money after the HardFuck!

#30: Here is a summary after the HardFuck 20:
1: It's no more possible to create new free accounts. Now you must pay with real money (with an exchanger) or create a claimed account if you already have an account with a VERY HIGH Resource Credit amount or by paying a fee. Steemit needs more money?
2: When you get an account, the delegated amount is decreased as soon as you earn some STEEMS. Steemit needs more money?
3: The delegated STEEMS are canceled for inactive accounts! Steemit needs more money?
4: The least: More accounts have their rewards not paid! After the pending 7 days, the amounts of rewards are reset to ZERO and no reward is paid.. Steemit is robbing the rewards! Steemit needs more money?
More and more members are lefting Steemit. Steemit is complex, not friendly, not convenient, undocument, a very poor communication, a very poor interface, a very poor complex not friendly text editor, etc... and full of trolls abusers flaggers sociopaths. How they can call this bad joke a real social network??
Steemit is in trouble! It seems they need more fresh money. They had created STEEMS each time new accounts were created. This is an artificial way to create 'money'. STEEMS are not created by 'mining' but artificially created when people was joining. It's not a real cryptocurrency. It's more a virtual currency with no real value. When people will understand that, the value of STEEM will drop dramatically. Has Steemit understood that? Apparently YES. This explains the 4 points above.
Steemit is turning into a ponzi scheme.

#26: We are still there because WE DO NOT FORGIVE, WE DO NOT FORGET. We are all working hard about a lot of projects in order to stop this stupid scam full of sociopath trolls abusers.

#25: Why you should not join the Steemit SCAM: https://www.affiliateresources.org/steemit-review-can-you-make-money-with-steemit/

#23: More and more disappointments about the Steemit Scam. No more new members, actual members are going away. The Steemit Scam is declared dead. Just have a look at the comments at https://steemit.com/steem/@themarkymark/how-do-you-feel-about-hard-fork-20

#21: Another report about the sociopath flagger trolls and the Steemit SCAM: https://steemit.com/wittness/@steemwhalepower/this-is-what-happened-today

#19: We have reset our list of fans of trolls because after millions of flags, at least 95% have left the scam Steemit! YEAHH!!!

#18: A report about the Steemit scam: If you have been getting banned from using Steemit or interacting with the Steem blockchain and feel like you are being scammed you are not alone. https://stishit.net/steem-power-scam-worry-no-more-solution-is-stish/

#17: Another report about the top troll @patrice with his troll abuser bot @mack-bot : https://steemit.com/steemit/@dowha/4yg66x-steemit-user-patrice-abuses-his-bot-mack-bot-to-downvote-every-selfvote-from-me-on-every-comment

#16: Today (september 2018, 17) we have succesfully launched a cyber attack and crashed the Steemit scam server. 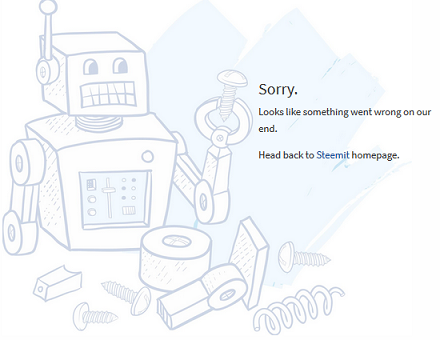 #15: One of our top troll @patrice is showing one more time his real face of sociopath with his troll bot @mack-bot :

#13: It's funny to see all these sociopath trolls blogging about us but NEVER want to give our webpage link ;) Is there something here they don't want you to know about them?

#12: The Ugly Truth Behind Steemit: https://decentralize.today/the-ugly-truth-behind-steemit-1a525f5e156

#10: Already half of a million flags for the trolls and their fans for this week!!! YEAHHHH!!!

#9: This time, the trojan PHP:BackDoor-Y has decided to travel on Steemit API!

#8: WOW! WOW!! JS:ShellCode-gen@bhv is still in the Steemit API giving us more accounts and power!! Thanks to the bad coders! Keep in touch!!

#7: Do you know JS:ShellCode-gen@bhv ? Yesterday, it decided to infect the steemit API. Don't worry, we took control ;)

#6: The details about the disabled accounts (We control now most of them):

#5: VICTORY!! We have disabled some trolls accounts! But, we still have to go on because the most important trolls accounts are still there, harassing innocent members and destroying their accounts! We'll give more details later.

Maybe you have seen we have changed our name. It's no more Steemit Defence League but Steemit Victims Defence League. We'll tell you more later. Remember we are legion, we do not forget, we do not forgive and nobody will stop us. We have seen some trolls trying to disinform you. Look at all is posted here. We have enough evidences they are real trolls abusers.

WE JUST HAVE BLOCKED THE STEEMIT API! We'll tell you more later {"error":{"type":"error_api_general"}}

#4: One more report about the trolls abusers gang : "Bernie and the gang downvote list for the last 90 days as of 6/28/18" https://steemit.com/steemit/@botreporter/bs-downvotelist-for62818 It's funny because @botreporter  is the troll abuser account of @bycoleman ! An abuser  troll reporting other trolls is not rare. We already have seen more : the top troll abuser @abusereports reporting itself as a troll! See more details below. This troll is admitting to be itself an abuser troll!!

#2: More and more people is reporting the famous trolls gang listed below! Look at this: https://steemit.com/airdrop/@abusereports/abusereports-re-netscape101if-you-did-the-provoco-airdrop-or-token-sale-then-this-might-be-helpful#@botreporter/re-ab-re-netscape101if-you-did-the-provoco-airdrop-or-token-sale-then-this-might-be-helpful-ab-1

WARNING: Everyone helping them by any way (upvoting, commenting, abuse flagging,etc...) will be blacklisted & flagged.

Don't forget to look at the bottom of this page our very interesting special 'delicious' report about the top Steemit abuser: @abusereports

And here is our special 'delicious' report about @abusereports the number one Steemit troll !

@abusereports is using a bot to track and report members self-voting, multiple posting, multiple commenting and other 'unacceptable behaviours'. Sometimes, some other members have reported his criterions are themselves abusive and based on nothing concrete. In plain language, they report this member to do a bad and stupid 'mission'.

Now, we show you that this fucking troll is the top most fucking stupid Steemit abuser:

First, look at this screencopy (before it's deleted..) at https://steemit.com/abusereports/@abusereports/self-voter-list-2018-04-22 : 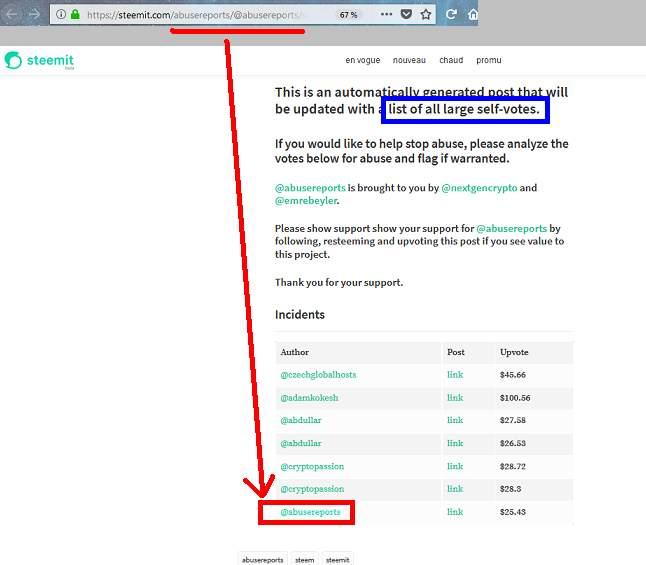 His own bot has reported himself to be an abuser!!! Of course, because he is an abuser!! So funny to see him reporting himself!!

Now, look again at the blue box on the screencopy above. He was reported to be a 'large self-voter'. This fucking member is reporting the large self-voters but he is himself a 'large self-voter'!! And that's because he's self upvoting ALL HIS POSTS AND ALL HIS COMMENTS!! (And he's also a spammer because he posts comments on all the posts/comments of members he is 'blacklisting') Here is an example: (You can see yourself at https://steemit.com/abuse/@abusereports/flag-report-2018-04-21 ) (He has recently stopped to do that. Maybe, he was feeling guilty himself to do the same 'bad things' he's reporting) 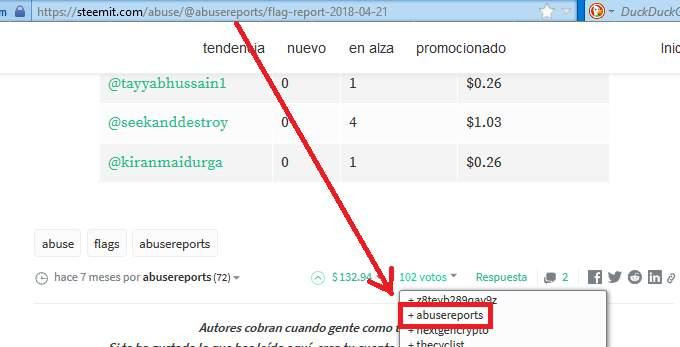 So, you can see how this troll is himself the top Steemit troll!

What to think about his followers and other fans who help him? Are they so stupid to not see themself this guy is an abuser and probably laughing at all his stupid helpers? Of course, they are stupid. 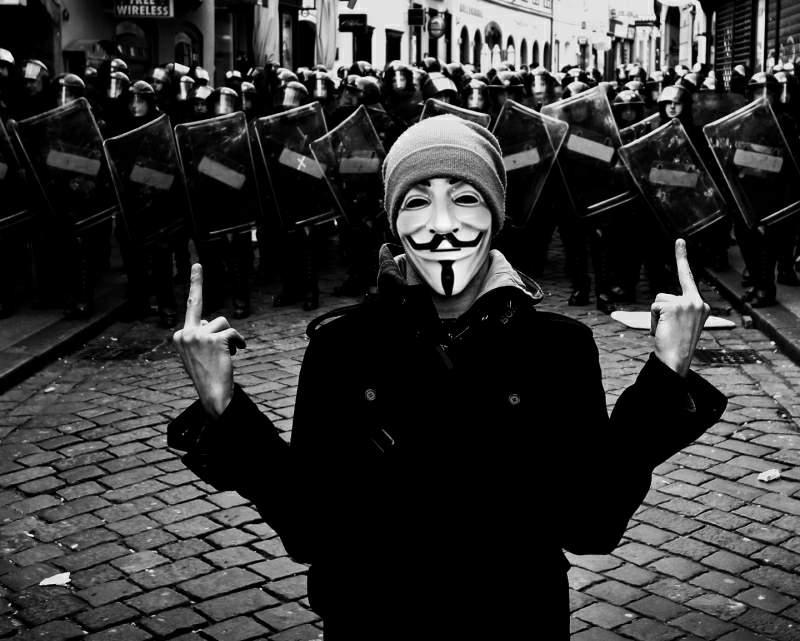