This summary provides a detailed video analysis of the available YouTube livestream videos that covered Amy Hughes’ attempt at the Guinness world record for the most miles ran on a treadmill over 7-days. It shows that her many public claims to have covered 520/521 miles to be very unlikely. For a background of what has happened before this summary see https://justpaste.it/19m7x and https://justpaste.it/19rba 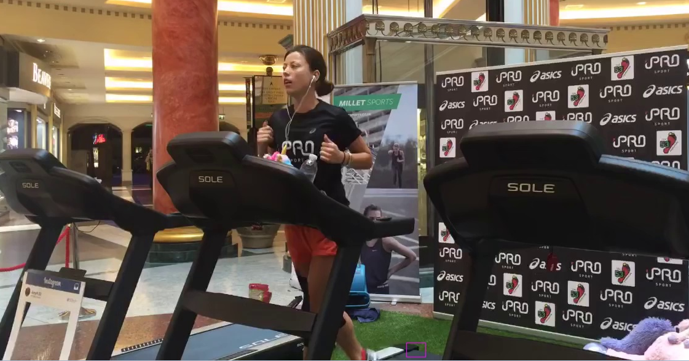 Amy Hughes’ record attempt spanned 7x24 hours from Sept. 1 – 8, 2016 at a shopping mall in the UK and was livestreamed on YouTube by sponsor Millet Sports. Amy Hughes and her boyfriend Dave Keighley have repeatedly claimed that there was livestream footage for all 24 hours of each day but despite many repeated requests, have not provided any footage for analysis. Several emails and tweets were also sent to Millet Sports to obtain the video but they have also not provided any links. The four YouTube livestream videos that are discussed in this summary were obtained by searching on Google and Facebook for people that posted about the hidden livestream links.

The YouTube videos did not show any portion of the treadmill display that would allow for a check of the mileage claims. However, they do show a portion of the black treadmill belt rotating and it had a white “Sole” logo that appeared with each revolution. This is even better than video of a treadmill display because we can get a physical count of the number of revolutions of the belt that cannot be forged in the same way like written logs or changing the calibration settings.

We know that Amy Hughes used a Sole Fitness TT8 treadmill provided by Sole Fitness (“gifted” one and had extras at the event), http://www.new-level.co.uk/blog/amy-hughes-beats-guinness-world-record-on-a-sole-fitness-tt8-treadmill

From looking at replacement parts for the Sole Fitness TT8 treadmill, we can see that the belt has a nominal length of 128 inches with a fully stretched length of 129.5 inches. For the purposes of this analysis, we will use a length of 130 inches to provide an extended margin of error.

A program was written to automatically count all the revolutions of the treadmill belt from the YouTube videos. The way the program works is by focusing on a small corner area of the treadmill belt where we can observe the white Sole logo as it comes by every revolution. This area is indicated by the purple rectangular outline in the screenshot below: 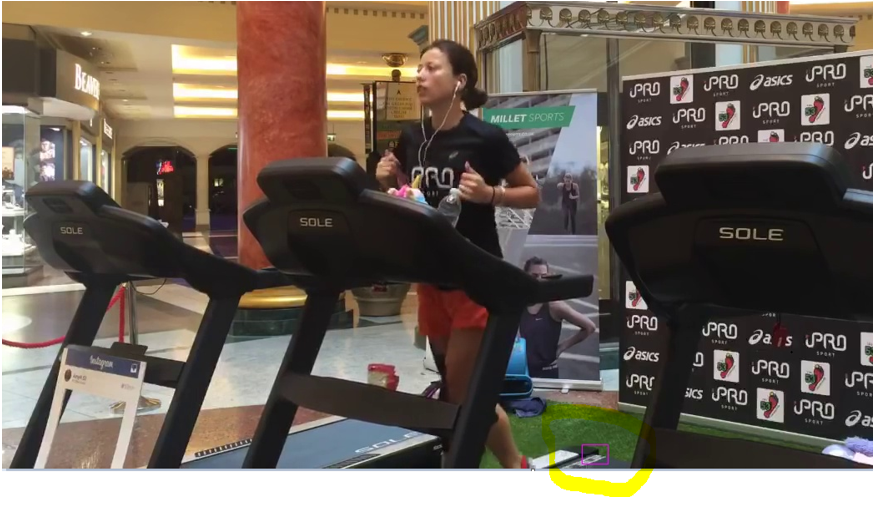 Screenshot: Detection Area the Program Focuses On Inside Purple Rectangle

The program converts the detection area from the RGB color space to the HSV color space to allow for easier specification of the specific range of colors/intensities that we are looking for. By using the HSV color space, we are able to provide detection of the white Sole logo as well as the green grass in the top right corner of the detection area. This allows for a much more robust detection than simply using the gray-scale color space and using only intensity, which would not be able to reliably distinguish between the black/gray treadmill belt and the dark green grass.

There were some important steps taken to ensure that the program would account for people stepping in front of the camera and for cases where the lights turned off:

The spreadsheets with the results of the detailed analysis of 4 videos available are available on my Google Drive for anyone to check: https://drive.google.com/drive/folders/0B1F3plcU7fEmUlFiY1B1Vms2ZVk

An example of what you will see in each of the spreadsheets is shown in the screenshot below:

Screenshot: Example of the Treadmill Belt Revolution Detection Output from the Program

The spreadsheets should allow anyone to check my analysis since it contains the detailed breakdowns of each treadmill belt revolution detected and indicates the exact time and video frame number where it was detected as well as YouTube links that brings you to the time it occurred.

The most important column of data for someone wishing to check the analysis results is the “Duration to Previous Detection (msec)” column. This column lists the time between the last detected treadmill belt revolution. For the data, you would expect that most of these durations to be between 500 msec and 5000 msec for a belt length of 130 inches. This corresponds to treadmill speeds between 14.8 mph to 1.477 mph. For the detections that occur after rest breaks/occlusions, this duration will be much higher. You can use the Data -> Filter ability of Excel to help you search for the data that interests you.

Here is a summary of how much mileage was covered in each of the videos along with the total average speeds:

Screenshot: Summary of Amy Hughes' Mileage and Average Speed in Each of the YouTube Videos

Note that the total average speed for both of the 11h55m videos come out to very close numbers (3.45 mph and 3.46 mph). This is a good indication that the detailed video analysis is yielding valid results and that 3.45-3.46 mph is what Amy Hughes’ true ability is over a long duration. The other two videos with much shorter duration yield higher average speeds because they do not cover a long enough span.

Also, we know from one of Amy Hughes Facebook videos and from one of her blog posts that she covered about 62.1 miles on the first day (Sept. 1st) with 18 hours of running. This works out to an average speed of 3.45 mph which essentially matches the total average speeds from the 12-hour videos above from Sept. 6th and 7th. This lends further support that Amy Hughes is really only capable of sustaining a 3.45 mph average speed over the long term.

Below are the graphs of the total average speed from each of the 4 videos. Note that 2 of the videos are of about 12 hours duration while the other 2 are much shorter in duration. The sharp changes are due to taking breaks/occlusions. The smooth changes are from the walking/running:

Comparison With What is Required to Break The Treadmill World Record

From the above analysis, we found that Amy Hughes had a total overall average speed of 3.61 mph over 28.77 hours based on 103.9 miles covered. How does this compare with what is required to cover the 520/521 miles over 7 days that Amy Hughes and Dave Keighley claimed she did? We will use the lower 520 miles claim to provide a benefit of the doubt.

Additionally, from the 18:00-22:00 minute marks of Amy Hughes’ podcast interview with Sarah Williams, she states she was already about “3 hours” behind schedule on the first day: https://www.youtube.com/watch?v=JbQmEiQAFRU&t=18m00s

Amy Hughes also claims in her interview that she was not on track to break the world record going into the 5th day of the run and then did several mysterious fast 5k/10k runs on the 5th and 6th nights out of nowhere that brought her ahead of the world record. This is very suspicious.

Amy Hughes also revealed that she even had time to sleep for 3 hours on the 7th day (early morning hours) of the run just before she ran the last several miles to break the record. In the podcast interview, she also claimed to have been “running” between 18-20 hours a day and sleeping 2-3 hours a night. Amy Hughes also made the claim of running between 18-20 hours a day in her blog post on her website along with claiming she ran for about 18 hours on each of the 1st and 2nd days: http://amyhughes53.co.uk/seven-days-treadmill/

From the detailed video analysis, there is no stoppage of walking/running in any of the 4 videos showing a 2-3 hour time span where Amy Hughes slept. In fact, the longest time span between the detection of a treadmill belt revolution in the videos is approximately 20 minutes. From this, we can see that Amy Hughes’ sleeping activities were carried out outside of what we can see in the video recordings. Additionally, if we were to assume she only rested for short periods in the videos and walked/ran/rested like that for 24 hours each day, she would be way ahead of even her claimed 520 miles based on the average speed of 3.61 mph.

We will give Amy Hughes another benefit of the doubt and say she carried on the walking/running activities like in the videos for 20 hours a day for each of the 6 days after the first day of 62.1 miles. Based on Amy Hughes’ average speed of 3.61 mph (that already has a benefit of the doubt built in), this means that her total mileage covered over the 7 days should be approximately:

This 495.3 miles is significantly below Amy Hughes' claim of 520 miles (and also significantly below the current world record of about 517 miles) but would match up with what she has publicly claimed with losing time over the 1st to 5th days. The only way she could have reached 520 miles is if she indeed produced some “incredible” 5k/10k runs over the span of several hours on the 5th and 6th days like she claims. However, there is no evidence she did these feats and that claim is very suspicious for someone already very fatigued on a multi-day run.

The calculated 495.3 miles is also assuming there is no other cheating going on since we can see in the Sept. 6, 2016 YouTube live stream that Amy Hughes did repeatedly lean/hung onto the treadmill bars while “running”. I would need Millet Sports to provide the rest of the live stream videos to verify what else happened.

If we assume that Amy Hughes ran for 19 hours a day on average on each of the 6 days after the 1st day, we see that a lower bound (still with a large amount of beneficial assumptions) on how far she actually ran would be:

In summary, based on the detailed video analysis, I believe Amy Hughes’ and Dave Keighley’s claim that Amy Hughes covered 520 miles over 7 days on a treadmill is false and that she did not break the world record even if we ignore all the other problems with their attempt. The detailed video analysis suggests that Amy Hughes’ true mileage is around 495.3 miles in the absolute best case scenario and 473.6 miles as a much more realistic number, both of which have a significant amount of beneficial assumptions built in. This is pending verification that there are no other activities indicating cheating from the live stream videos that neither of them are willing to provide.