"But the real value of our attacks today lies in the psychological impact, not in the immediate casualties.  For one thing, our efforts against the System gained immeasurably in credibility.  More important, though, is what we taught the politicians and the bureaucrats.  They learned today that not one of them is beyond our reach.  They can huddle behind barbed wire and tanks in the city, or they can hide behind the concrete walls and alarm systems of their country estates, but we can still find them and kill them.  All the armed guards and bulletproof limousines in America cannot guarantee their safety.  That is a lesson they will not forget."

--- Excerpt from The Turner Diaries, by Dr. William L. Pierce.

The military has a non-lethal Directed Energy Weapon (DEW) called the "Active Denial System."  Which, despite all the hoopla and millions in tax-dollars, hasn't actually ever been deployed!  Their Active Denial System is basically a 100 kilowatt, 95 GHz gyrotron oscillator (CPI VGB-8095) feeding a high-gain (very narrow beamwidth), rotatable parabolic or phased-array antenna.  The idea is for the high-energy RF beam to rapidly heat the outside layer of skin (up to around 130°F), causing the target to flee the immediate area.  Due to its 3.2 millimeter wavelength, a 95 GHz beam can't penetrate more than about 0.4 millimeters of living tissue and the "blink" factor will help to protect your eyes.  And therein lies the entire problem...  Who wants a weapon that only annoys people?  We want one that will fry their insides!

The July 1989 issue of 73 Magazine has a really neat article entitled "ATV Transmitter from a Microwave Oven!" by David Pacholok, KA9BYI.  The article tells you how to construct a high-voltage power supply and frequency modulator circuit to control the 2.45 GHz magnetron used in a standard microwave oven.  The circuit is actually quite clever, and also fairly simple to build, but does requires the use of old television horizontal sweep tubes (6JE6, 6LQ6, or 6MJ6 - with 6MJ6s being the best) to control the current into the magnetron.  That's one big problem, as these tubes can be more difficult to find than Barack Hussein Obama's birth certificate.  Try checking your local TV repair store (Repair?  Huh?) and pick up as many as you can find, along with the matching 9-pin Novar sockets.  Most of the other parts, believe it or not, can still be picked up at Radio Shack.  Also, since the 73 article is quite thorough, the specific details of the magnetron's control circuit operation will not be covered here.  A copy of the article will appear on the website.

The goal for our project is to implement this same circuit into some type of "Poor Man's Active Denial System."  The idea being that using a microwave oven magnetron in Continuous Wave (CW) mode, instead of the normal 60 Hz "pulsed" mode, will result in a higher average output power.  This is much more desirable for "cooking" a target.  You may remember a MythBusters episode where they try to cook a turkey using a high-power pulsed marine (9.4 GHz) radar.  While radars do put out alot of radio frequency energy, it is only for a few microseconds.  Their overall average RF output power is actually quite low, so they can't really harm the living.

While not having anywhere near the range or insane RF output power level of the military version, this version of the Active Denial System is still quite useful for slowly (or covertly) heating a remote target.  It may also be possible to remotely induce fevers, cataracts, headaches, or other fatigue symptoms in a human target.  And, since the 2.45 GHz wavelength is quite long, it may even be possible to cause severe internal tissue, brain, or other organ damage.  RF heating of a person's heart can cause all sorts of problems, especially if they have a pacemaker.  Imagine being able to remotely induced a heart attack...

All that from the little box sitting in your kitchen.  Holy fuck! 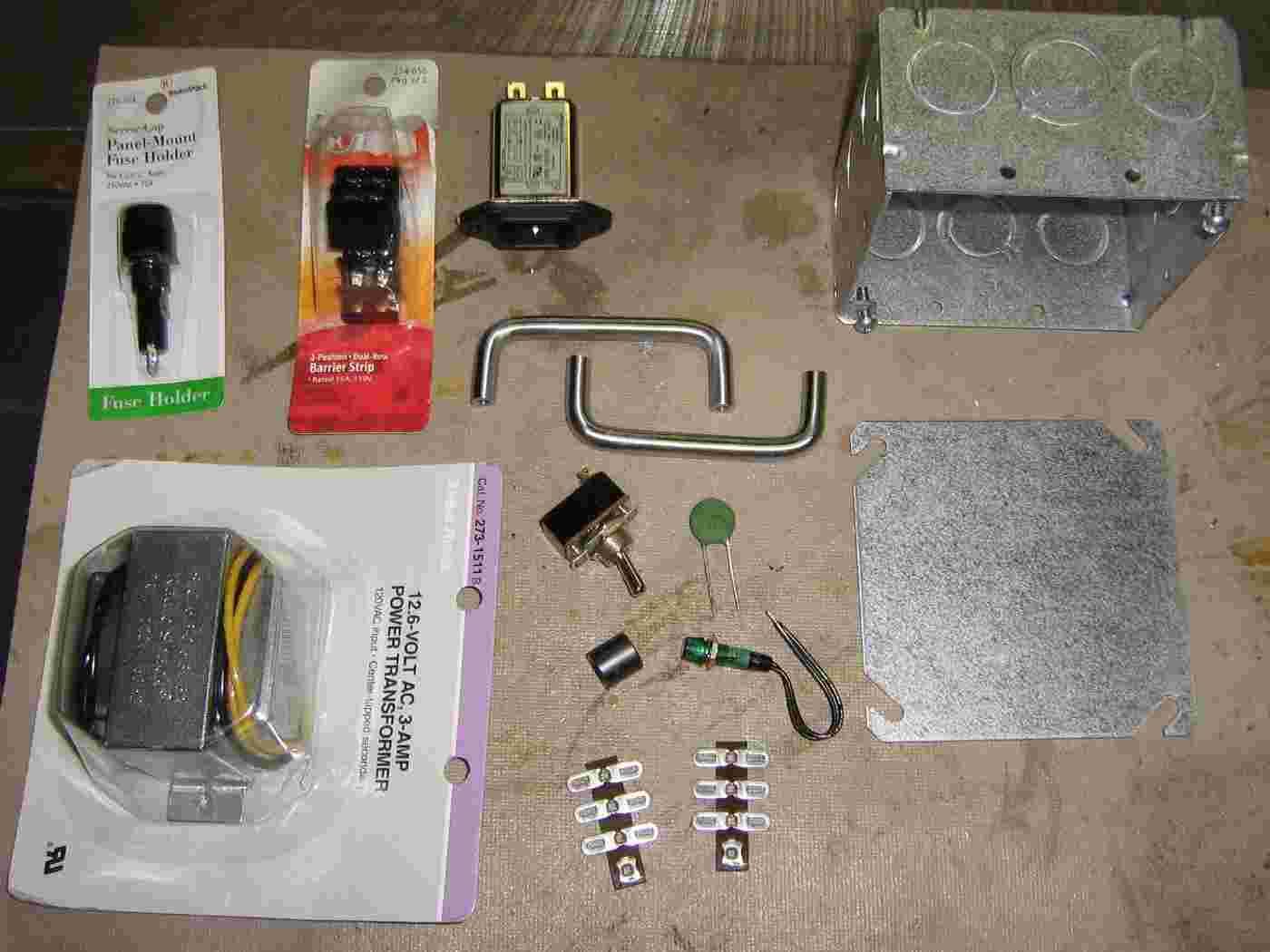 A high-amperage line filter, toggle switch, and fuse holder will be mounted inside a square electrical outlet box.  The filtered 120 VAC lines will be mounted on standoffs and distributed to the other transformers.

The little green blob with two leads is an input surge absorber from an old computer switching power supply.  It's used to reduce the large surge current when the power is initially applied.

The Radio Shack #273-1511 transformer will provide the 12.6 VAC for the two 6MJ6 tubes (filaments in series) we will be using.  It will also provide the +/- power supply for the op-amp in the control circuit. 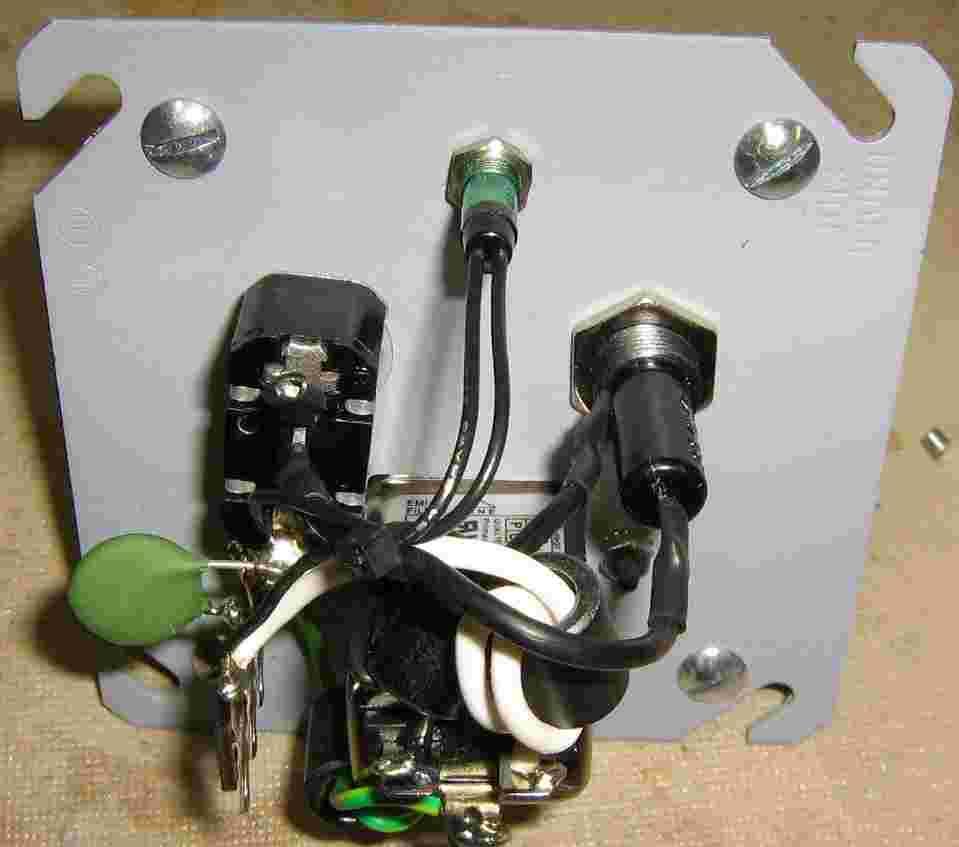 Try to use a single point ground to reduce any ground loops.

There are (optional) ferrite beads on the incoming 120 VAC hot, neutral, and ground leads.

A green neon lamp is used as a power indicator. 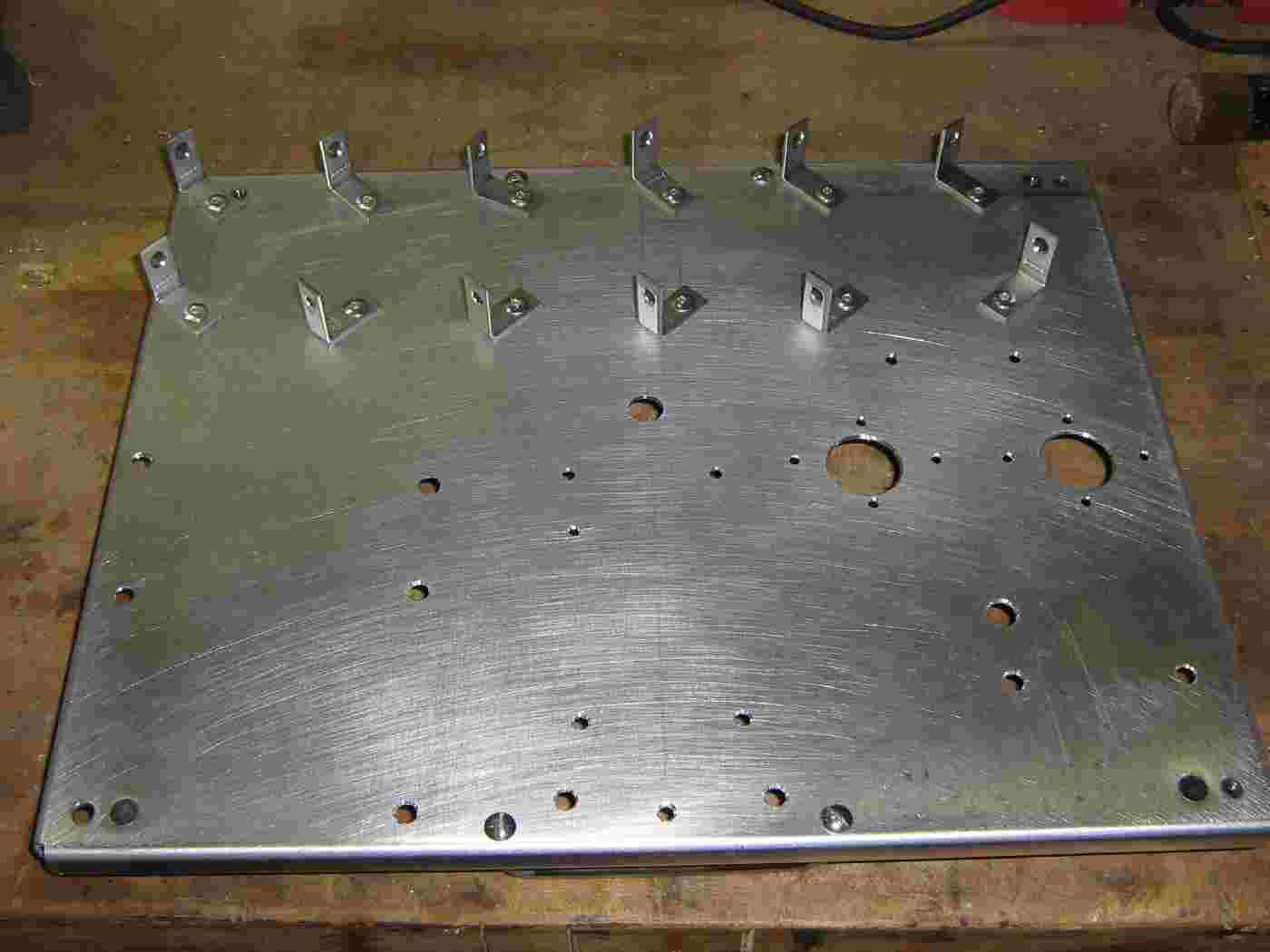 Everything will be mounted to a large aluminium plate.

L-brackets are riveted to the plate, which will be used to mount the twelve electrolytic capacitors making up the high-voltage power supply's ripple capacitor. 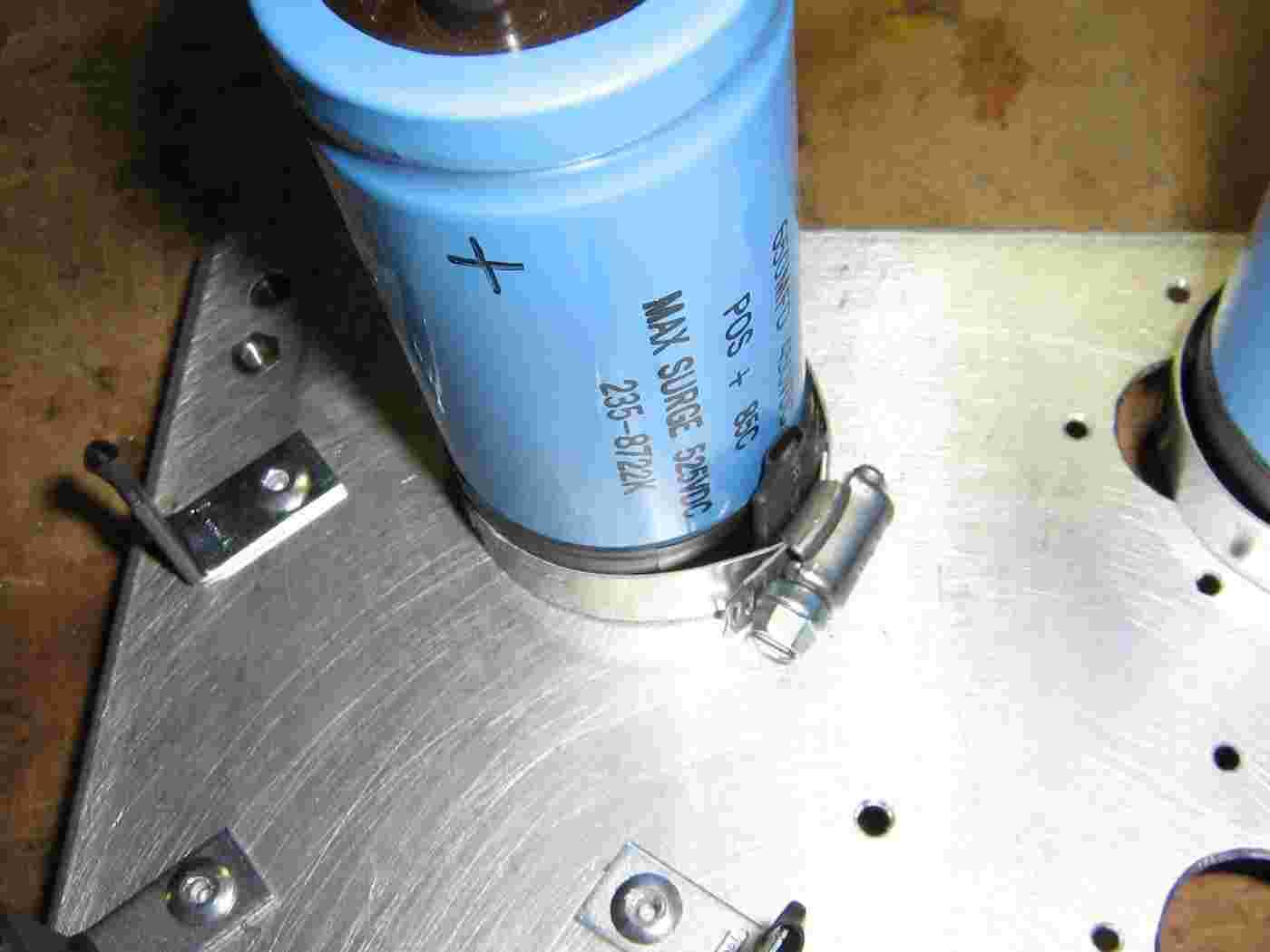 Put a piece of heatshrink tubing over the L-bracket and wrap the bottom of each capacitor with electrical tape. 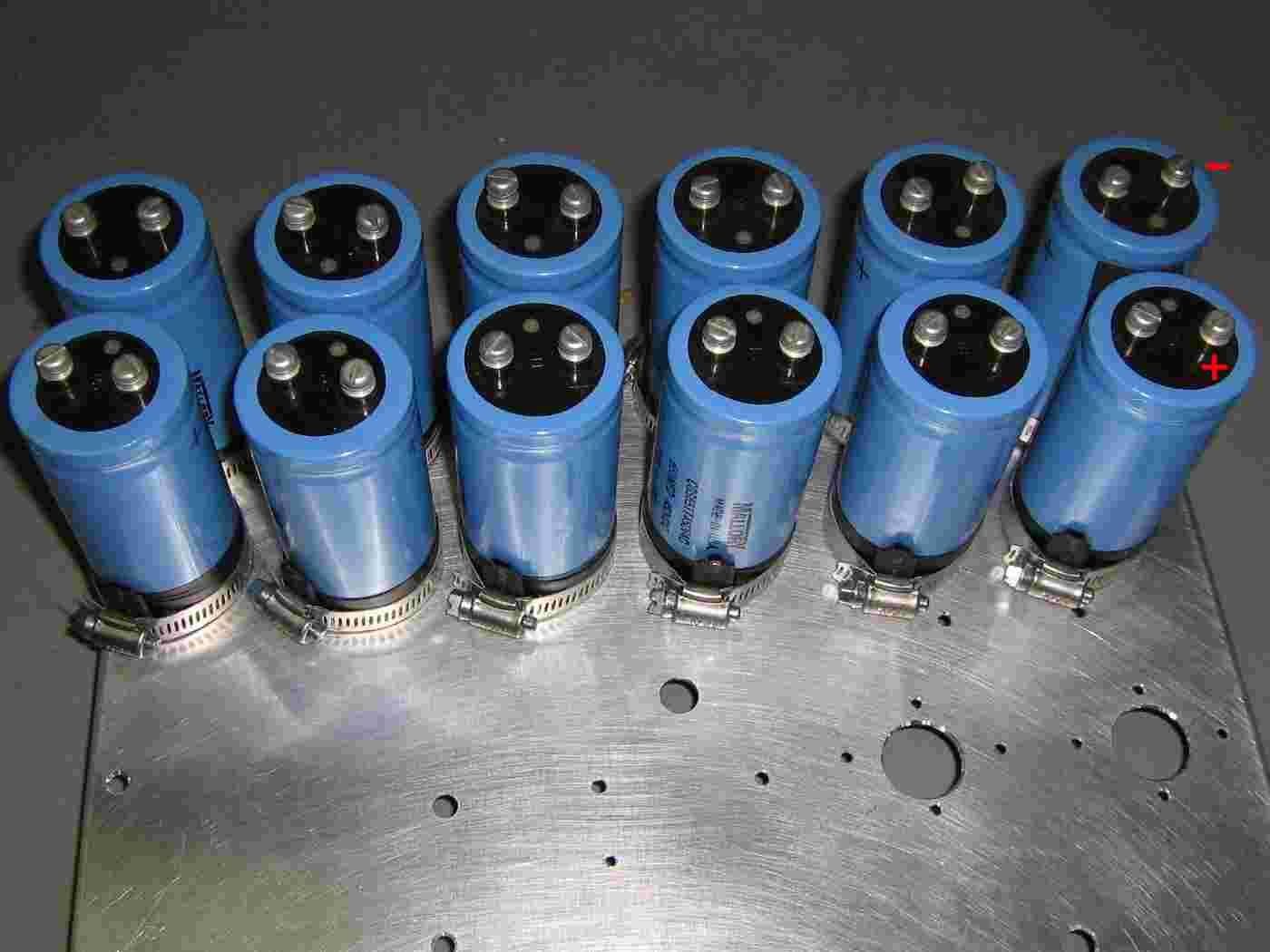 The twelve capacitors ready to go.

Proper high-voltage construction techniques would require a little more space between the capacitors and maybe also mount them on some type of insulator.  Oh well...

Wire the capacitors in series (+ to -) with a 100 kohm / 5W resistor across each one for voltage load sharing. 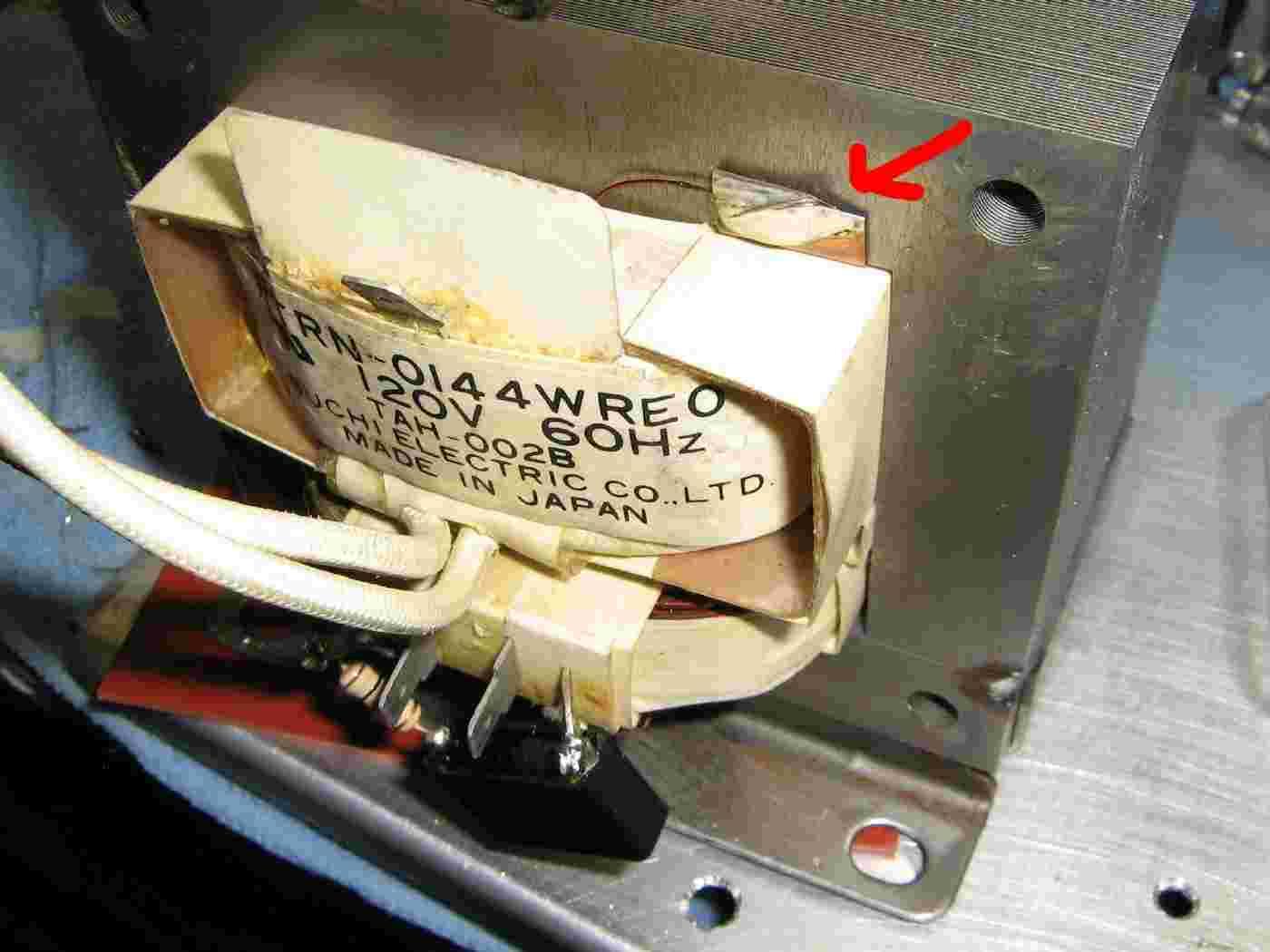 Its secondary provides 3.3 VAC for the magnetron's filament and the high-voltage winding provides around 1,800 VAC.

Note that one side of the high-voltage winding is connected to the frame of the transformer (ground).  This will need to be disconnected and properly isolated.

The magnetic shunts, which are normally installed in a microwave oven transformer, can stay.

On the two bottom spade connectors for the 120 VAC primary input, a resistor/capacitor snubber circuit is used to clamp any high-voltage spikes or kick-backs. 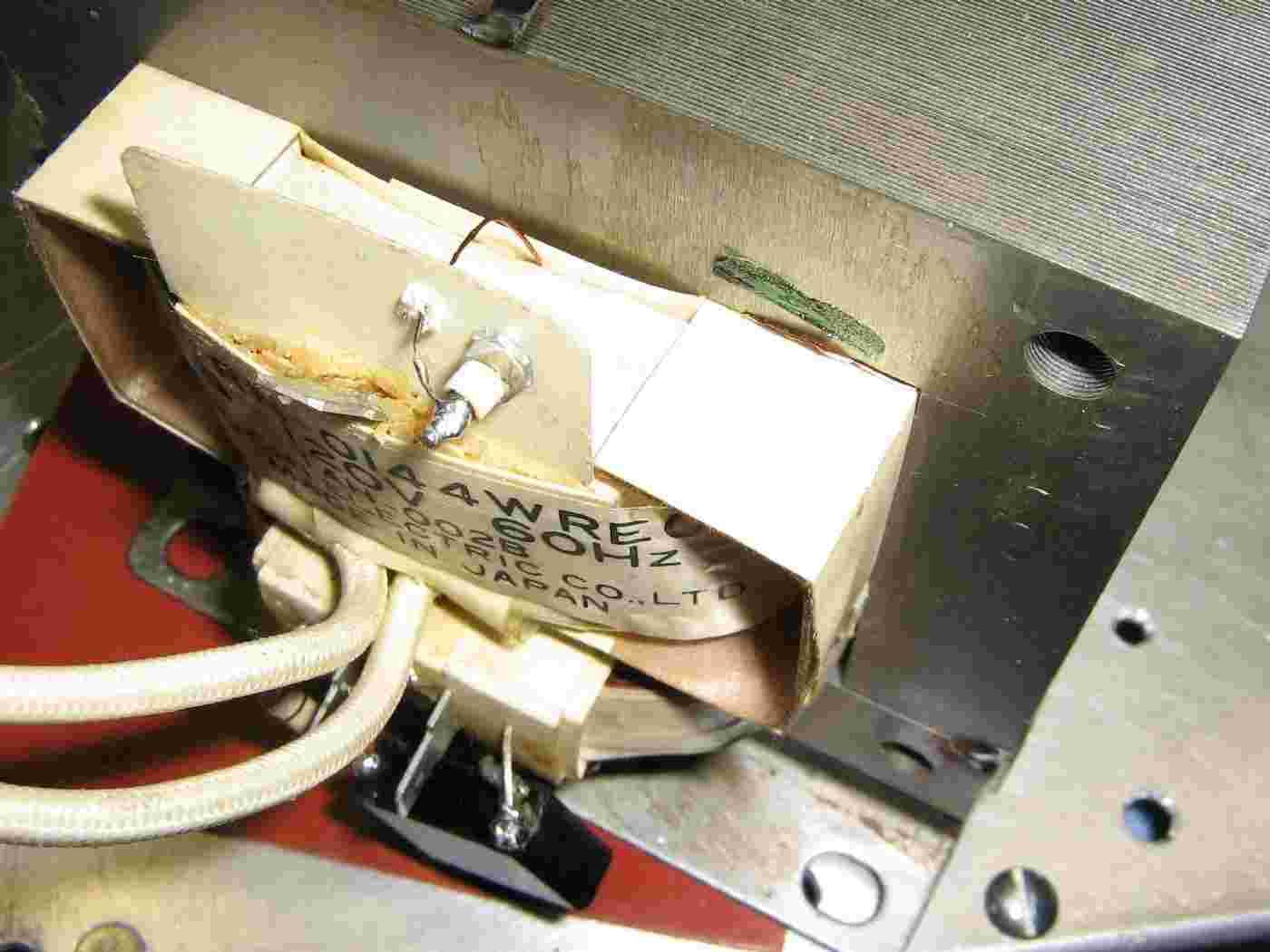 The grounded end was unsoldered and connected to a little stand-off terminal mounted on the transformer's protective cardboard.

Not all transformers will be the same, but they will all have one side of the high-voltage winding tied to ground, either with a screw or a solder tab. 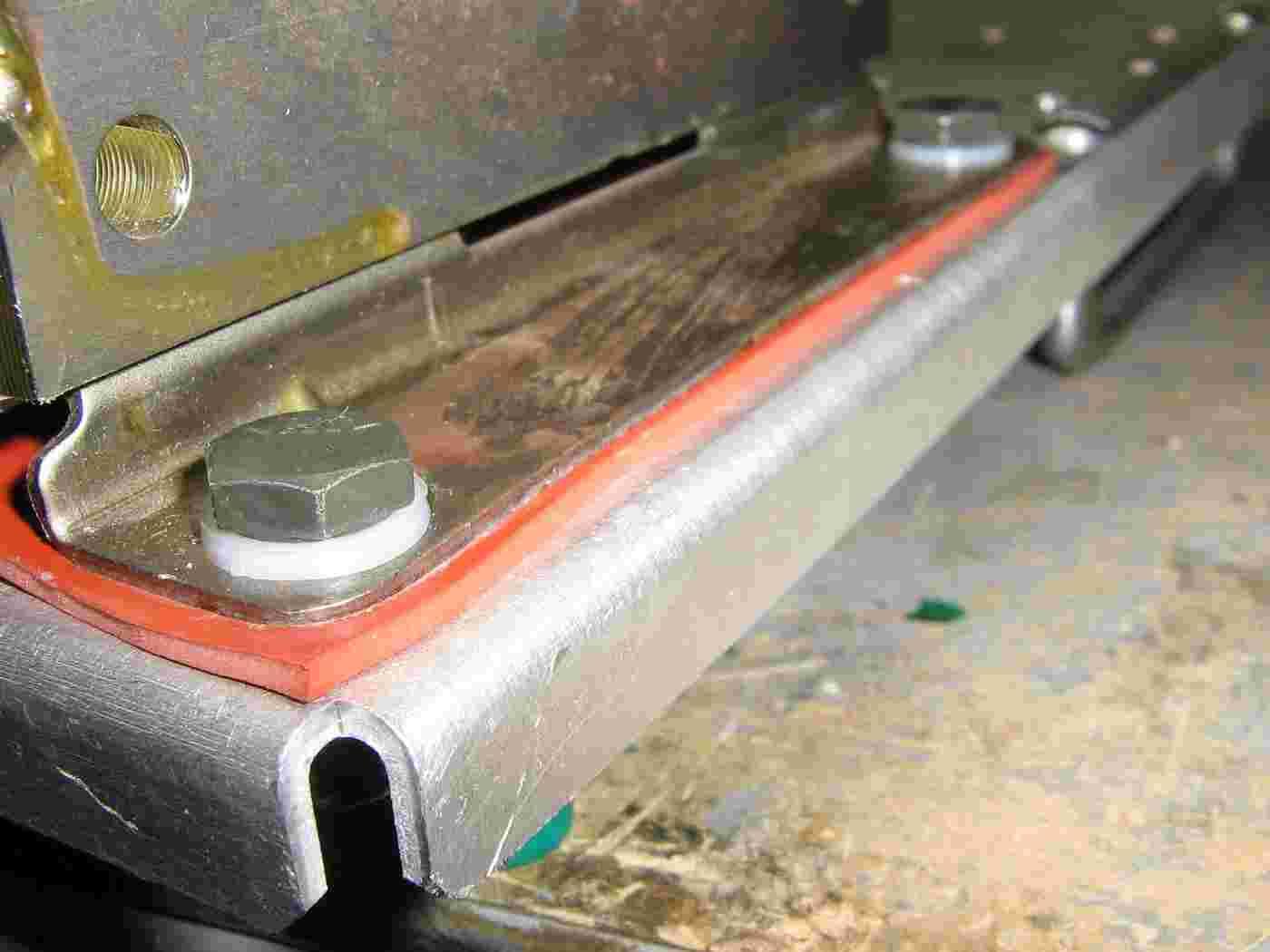 The case of the transformer was further isolated from the chassis ground using a rubber gasket sheet and nylon washers on the mounting bolts.

This is to help reduce any 60 Hz hum, if you'd ever wish to modulate the magnetron's output in the future, so it's not really a requirement. 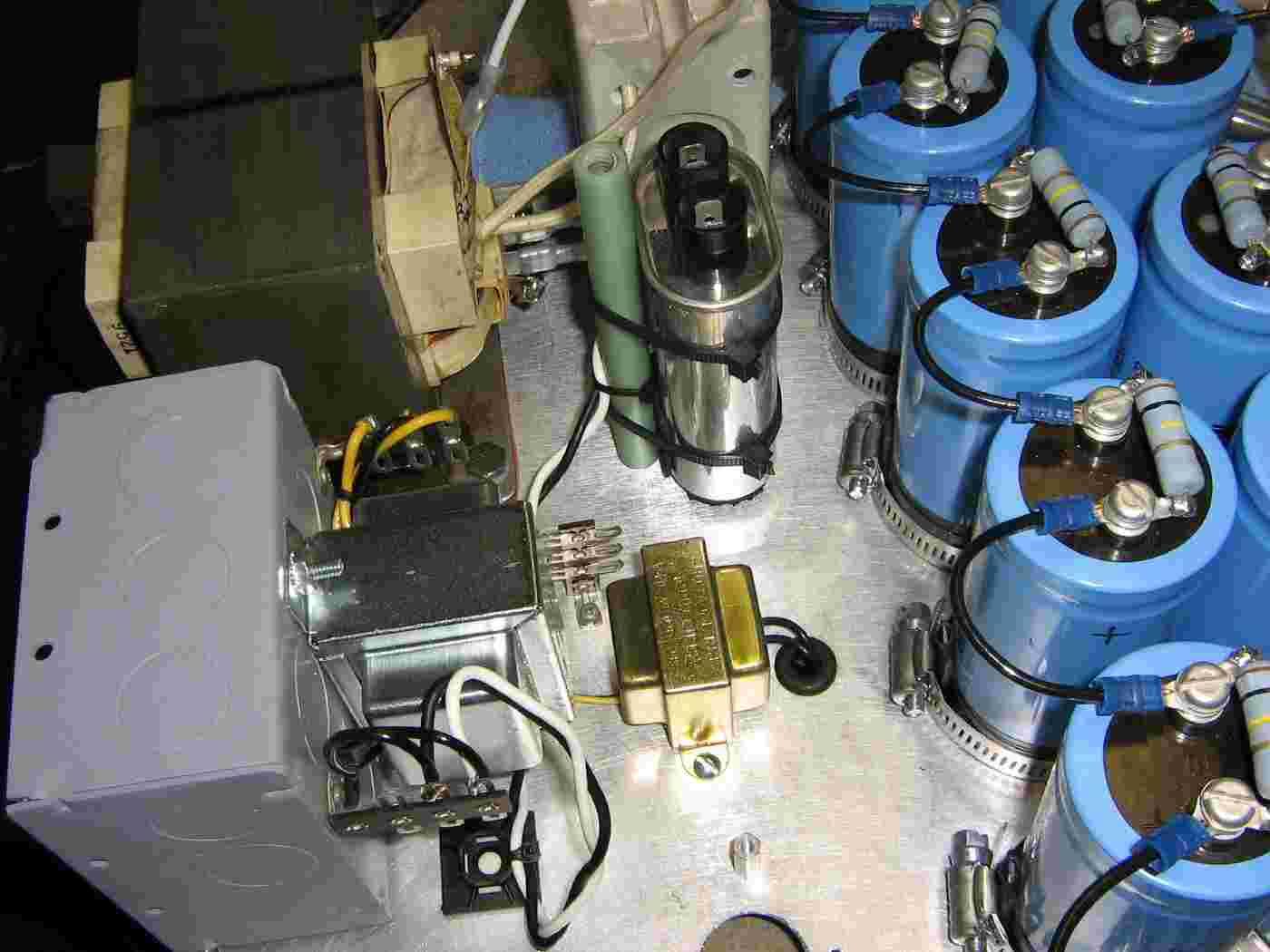 Overview of the 6MJ6's filament transformer (silver-colored - mounted on the electrical box) and also the grid voltage transformer (gold-colored).

The series 0.8 µF capacitor in the voltage-doubling circuit is isolated from ground by Zip-tying it to a plastic rod.

You can also see the high-voltage load sharing resistors (100 kohm / 5W) aross each of the electrolytic capacitors.  These will also help to dissipate any stray voltage when the power is off. 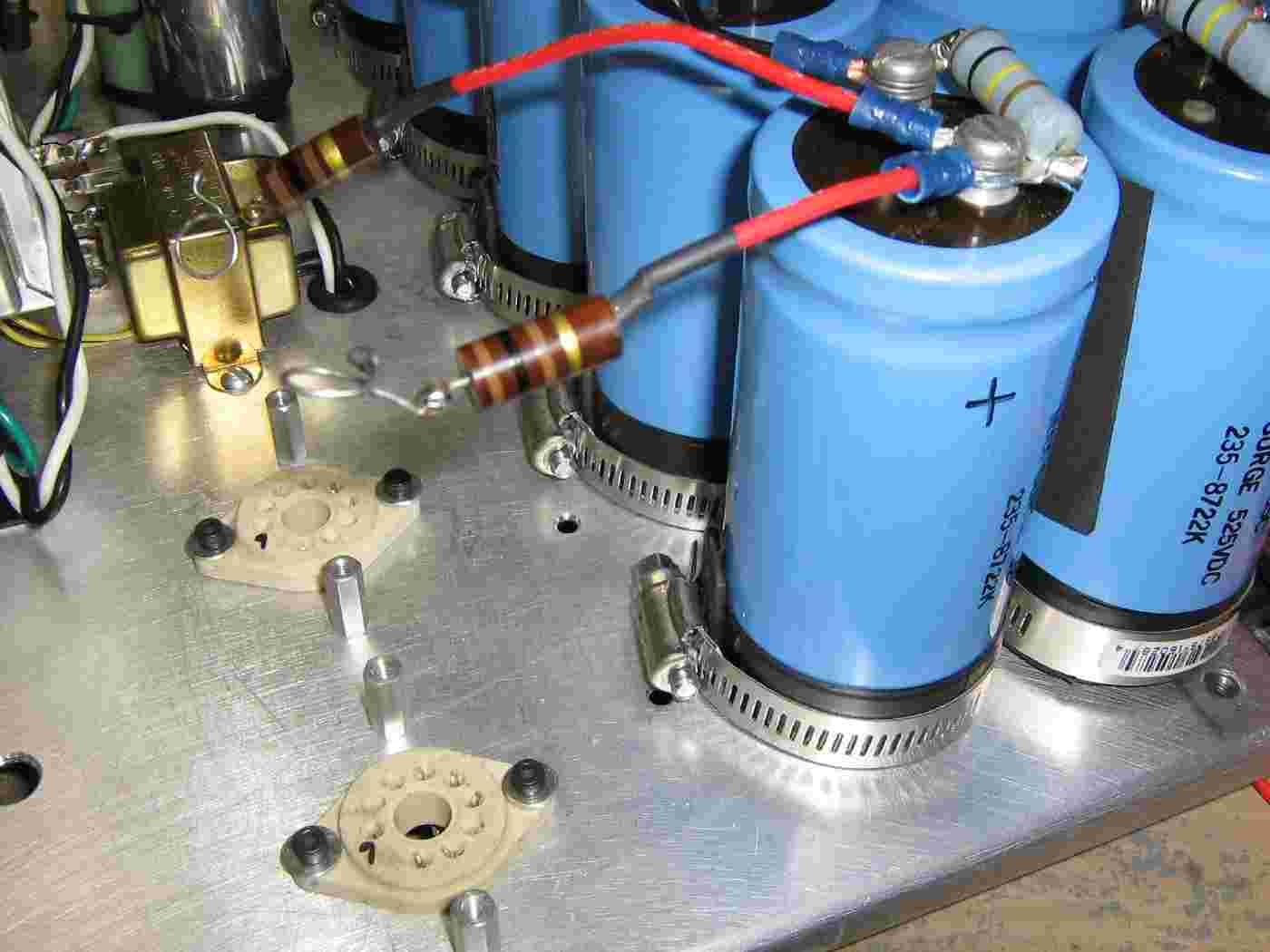 High-voltage output from the capacitor bank.

Little spring clips were made to connect the 100 ohm resistors to the top cap (plate) on the two 6MJ6s. 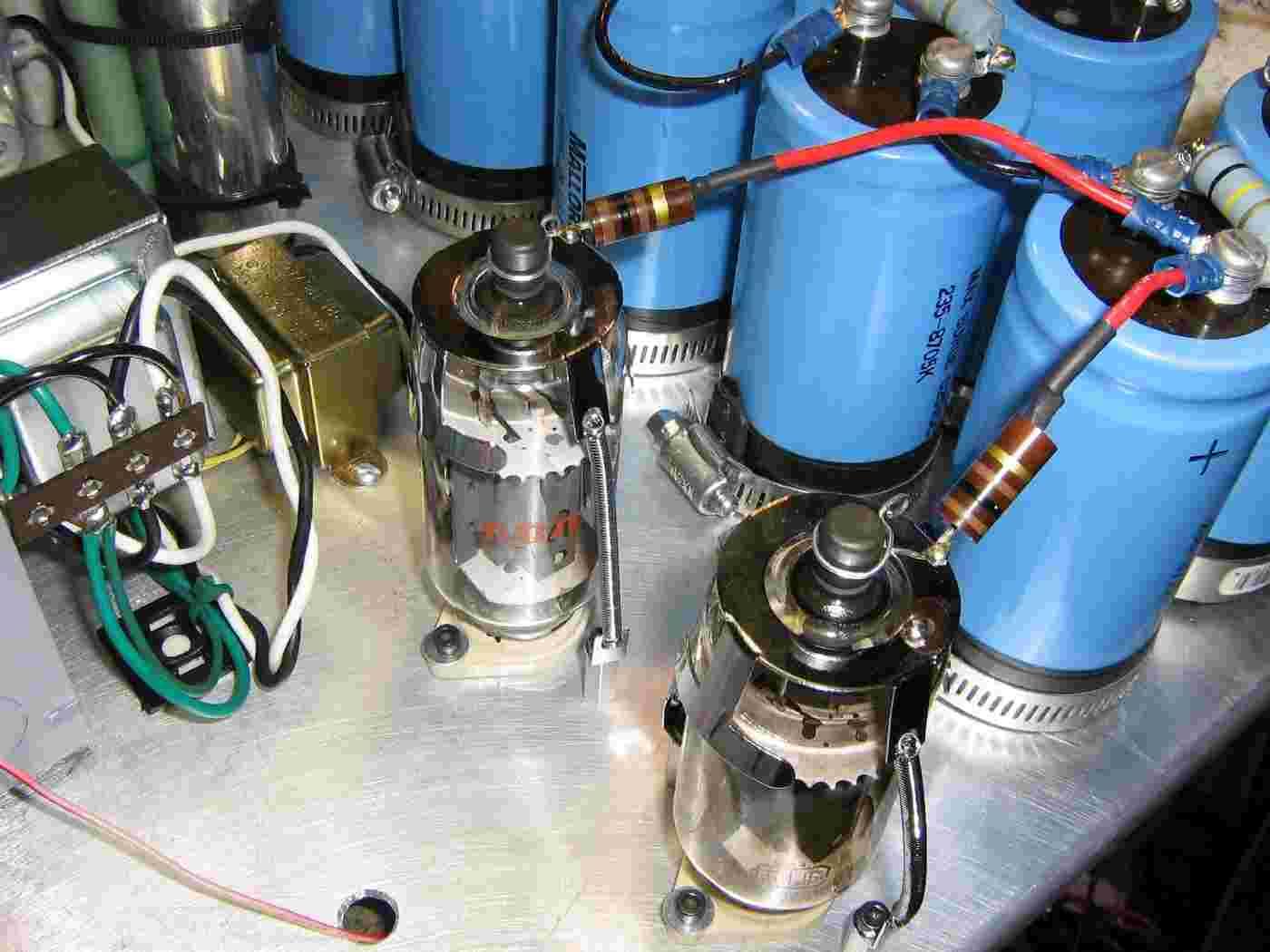 The tube on the lower-right is the "A" tube, the other is the "B" tube. 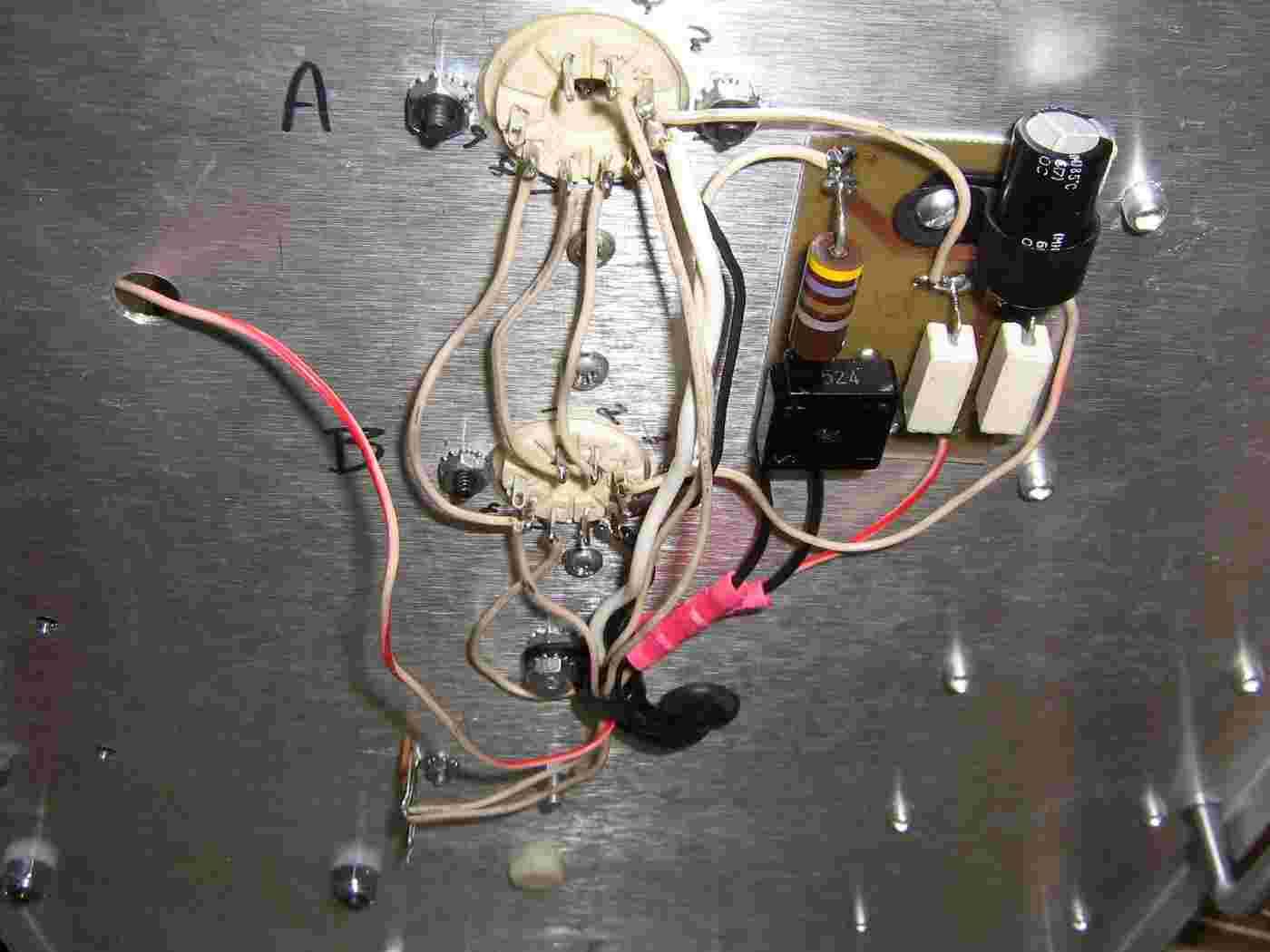 The 6MJ6's have their filaments wired in series so they can be driven directly with the 12.6 VAC secondary from a Radio Shack #273-1511 transformer. 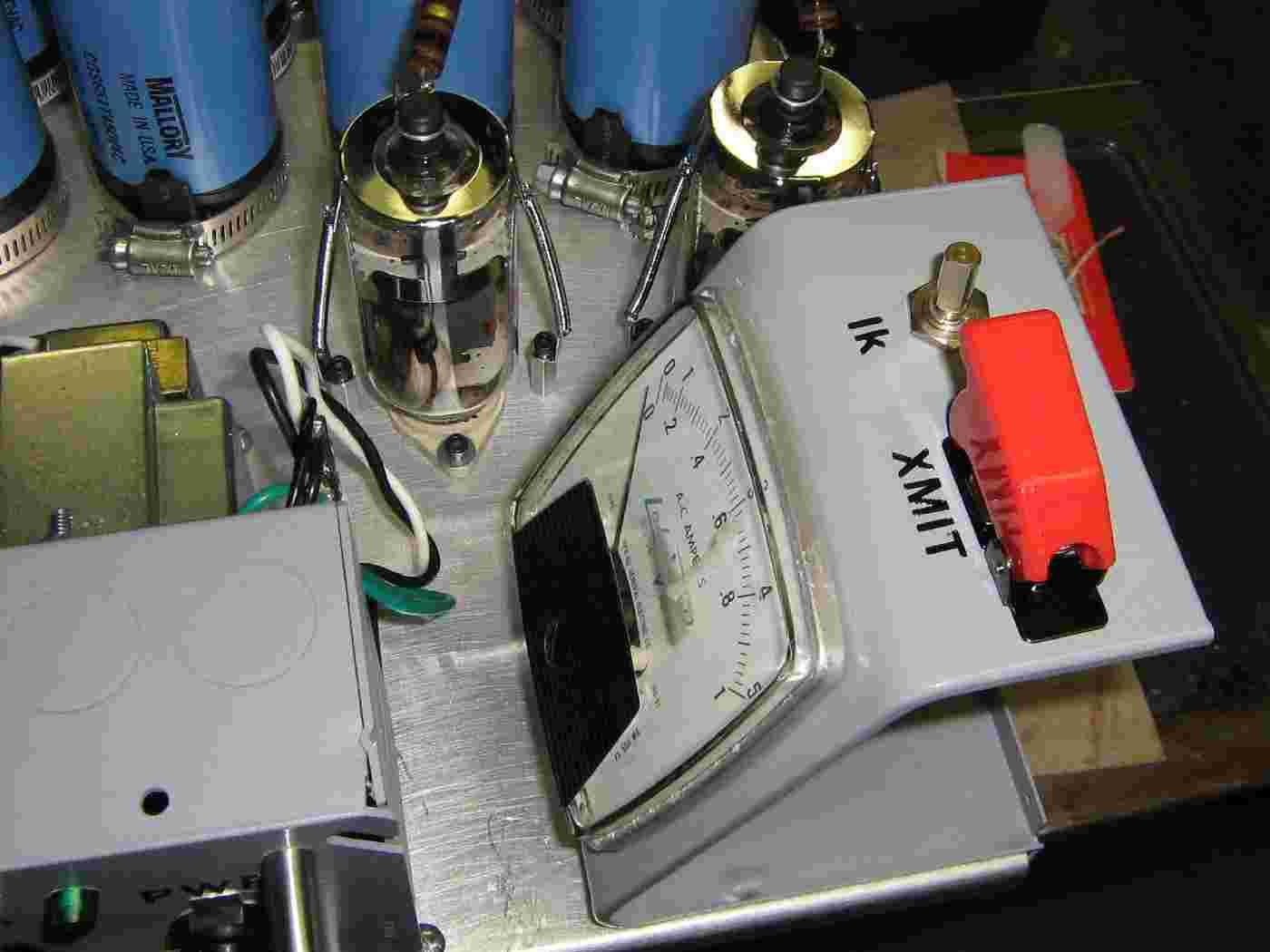 The meter is from an old Lab-Volt trainer used in schools.  Its full-scale reading is 500 mA DC. 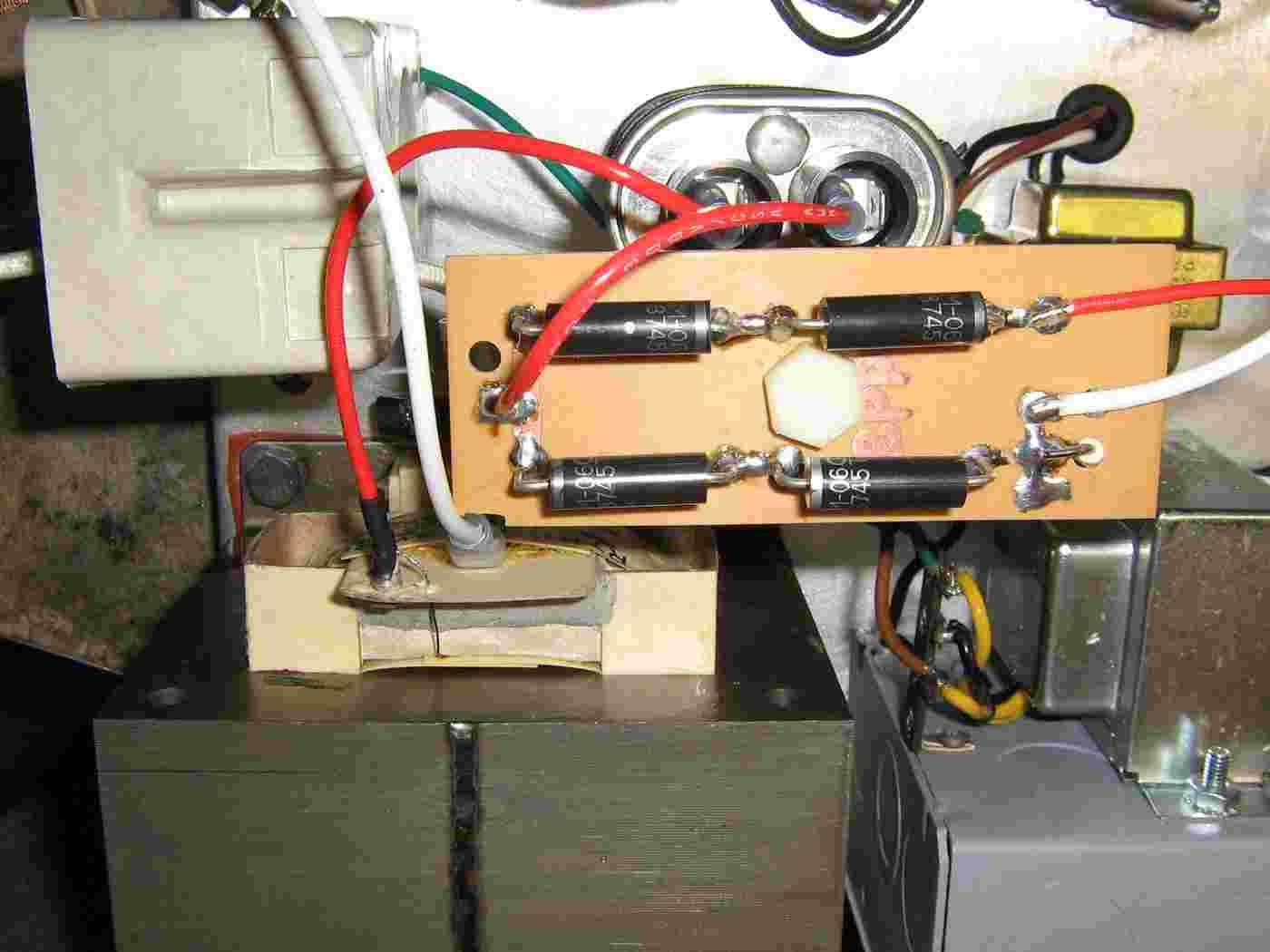 Leaving the shunts in the microwave oven transformer also helps to suppress the large surge current when first powered on.  This is necessary to protect the diodes from any over-current transients.

Use two diodes in series, as shown, just to be safe. 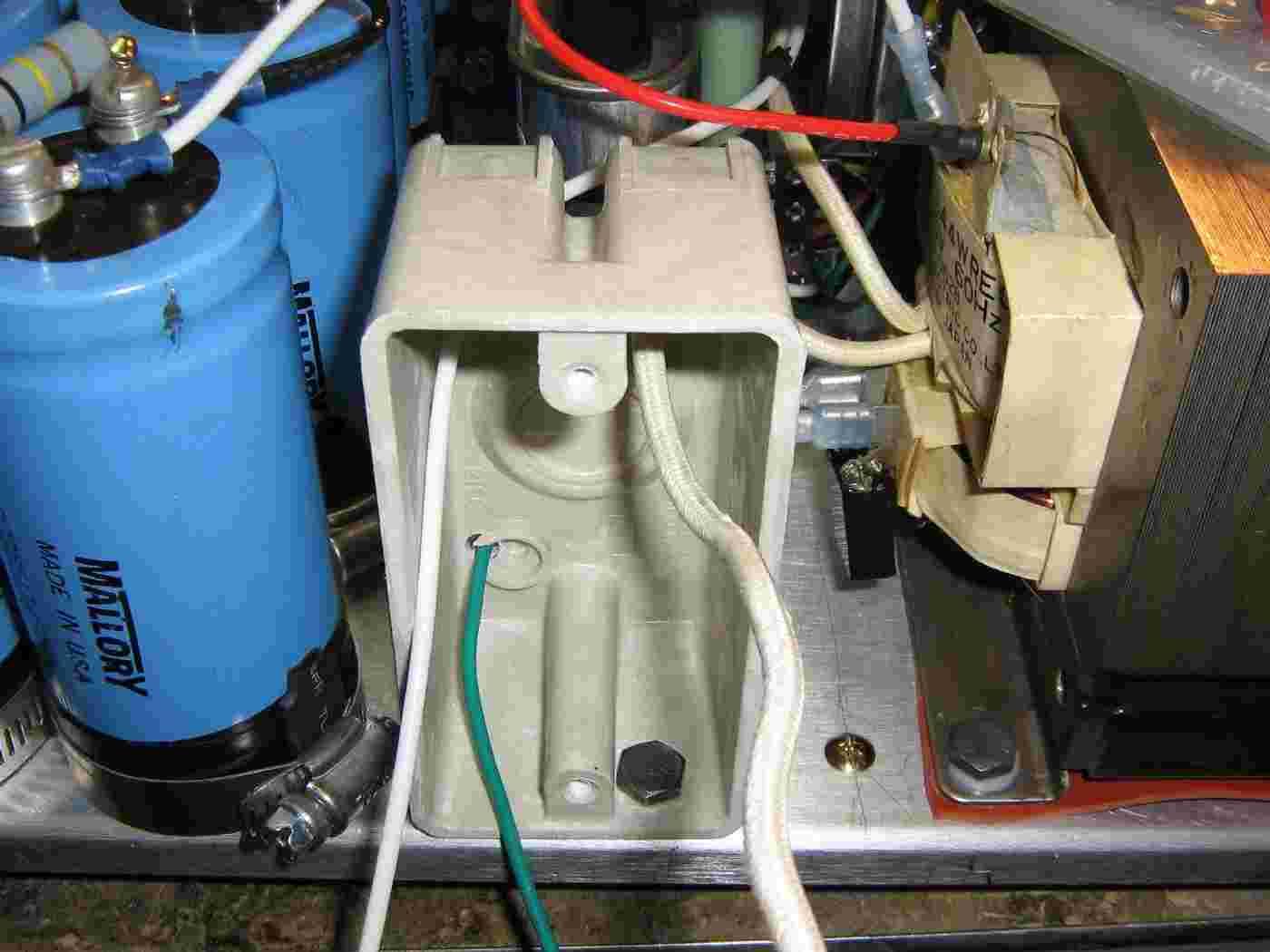 The final high-voltage output connectors will be mounted in a fiberglass electrical box.  The magnetron connections will be via banana jacks. 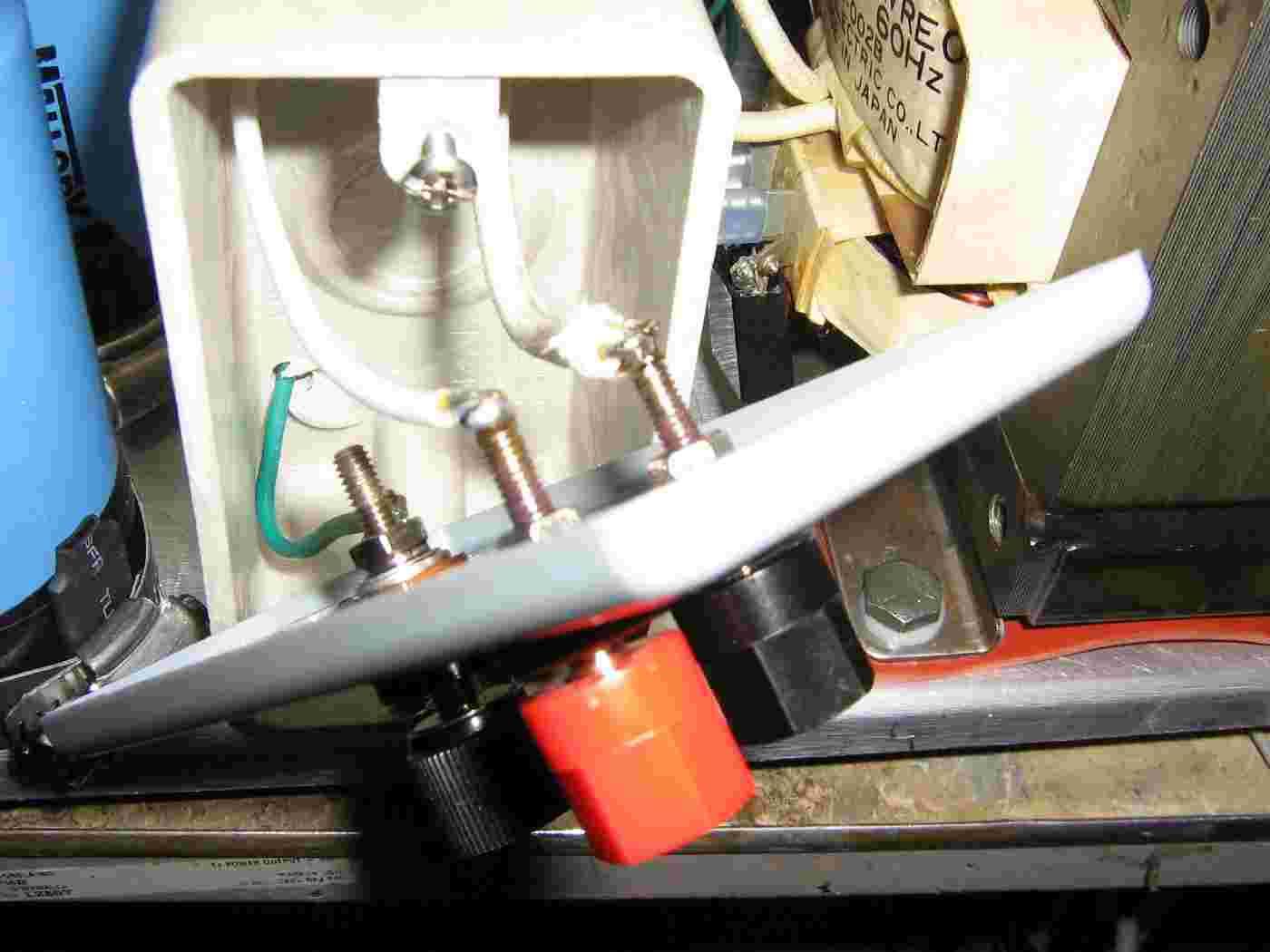 Connect the banana jacks like so.  Note that the direct filament winding on the microwave oven transformer usually goes to the magnetron's "FA" terminal.  Every schematic or datasheet shows them connected differently, so I don't know on that one...

Also note the isolated ground lug.  This ties back to the single point ground in the main incoming voltage electrical box. 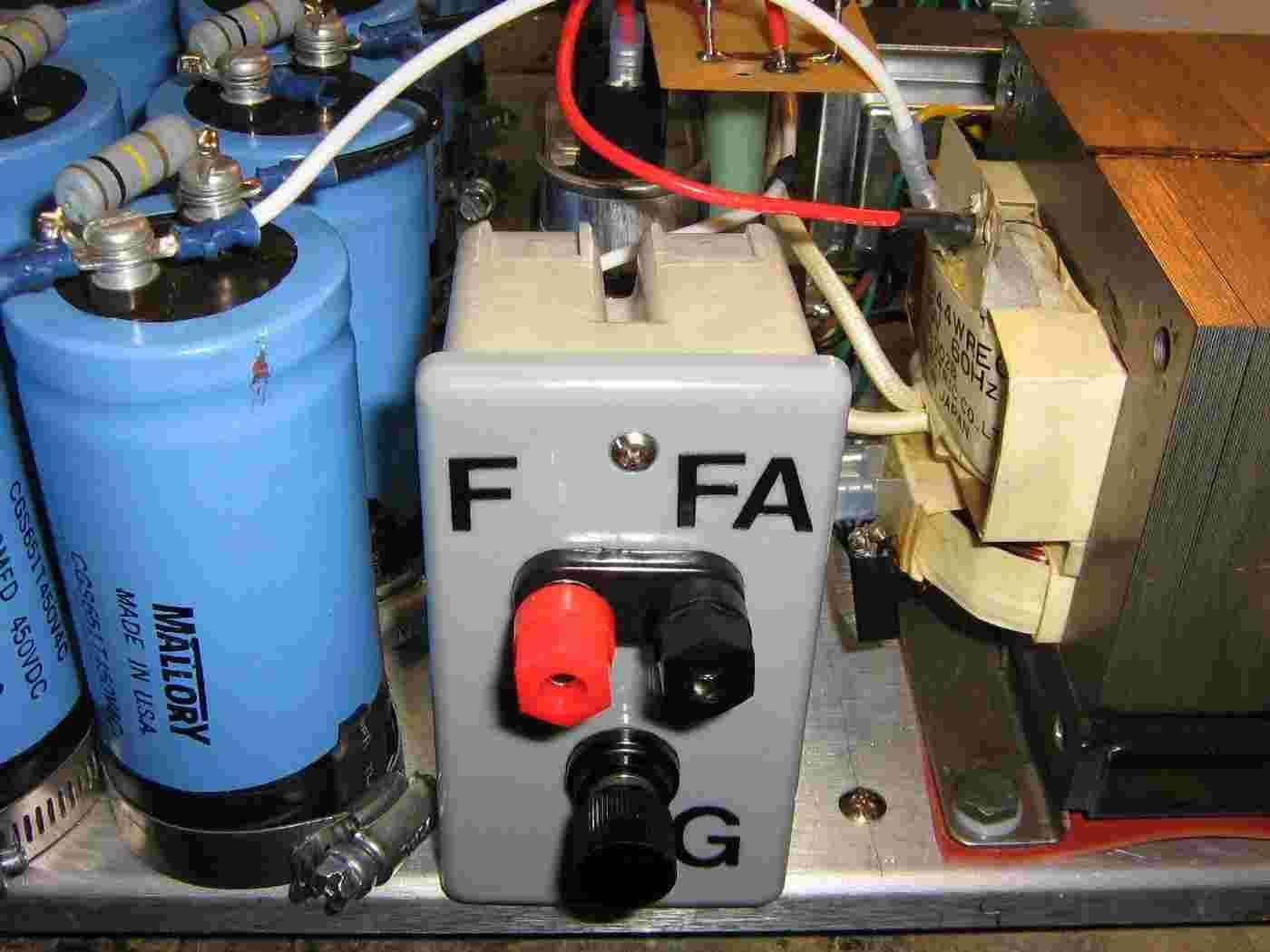 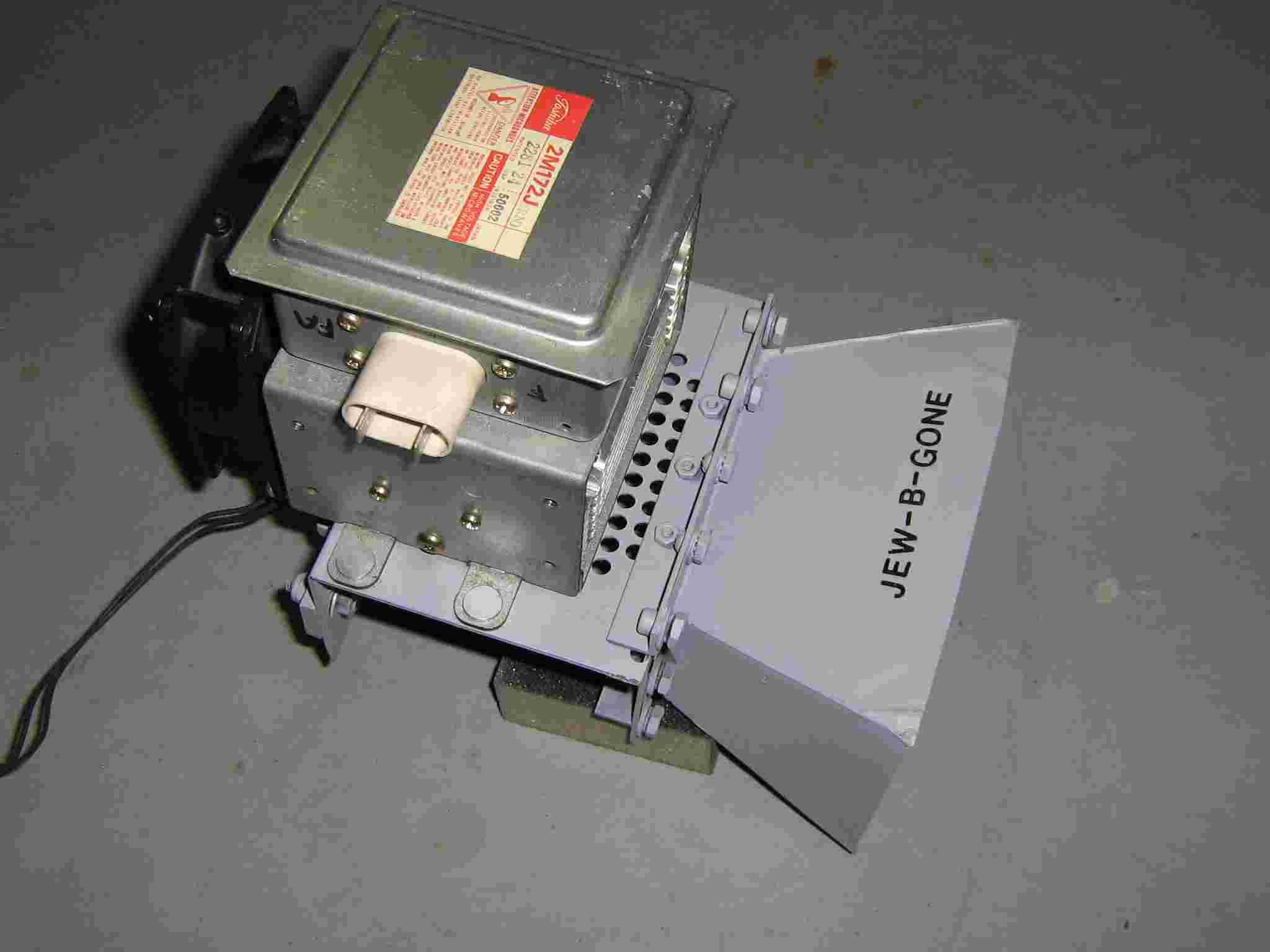 The horn has a mounting bracket in the rear to allow for mounting at the focal point of a parabolic dish.

This one is designed for "Bolshevik control."

"'Nobody wants to be on the wrong side of Ari Emanuel, especially now that his brother is running the White House,' said one television executive, who asked for anonymity to preserve harmony with him." 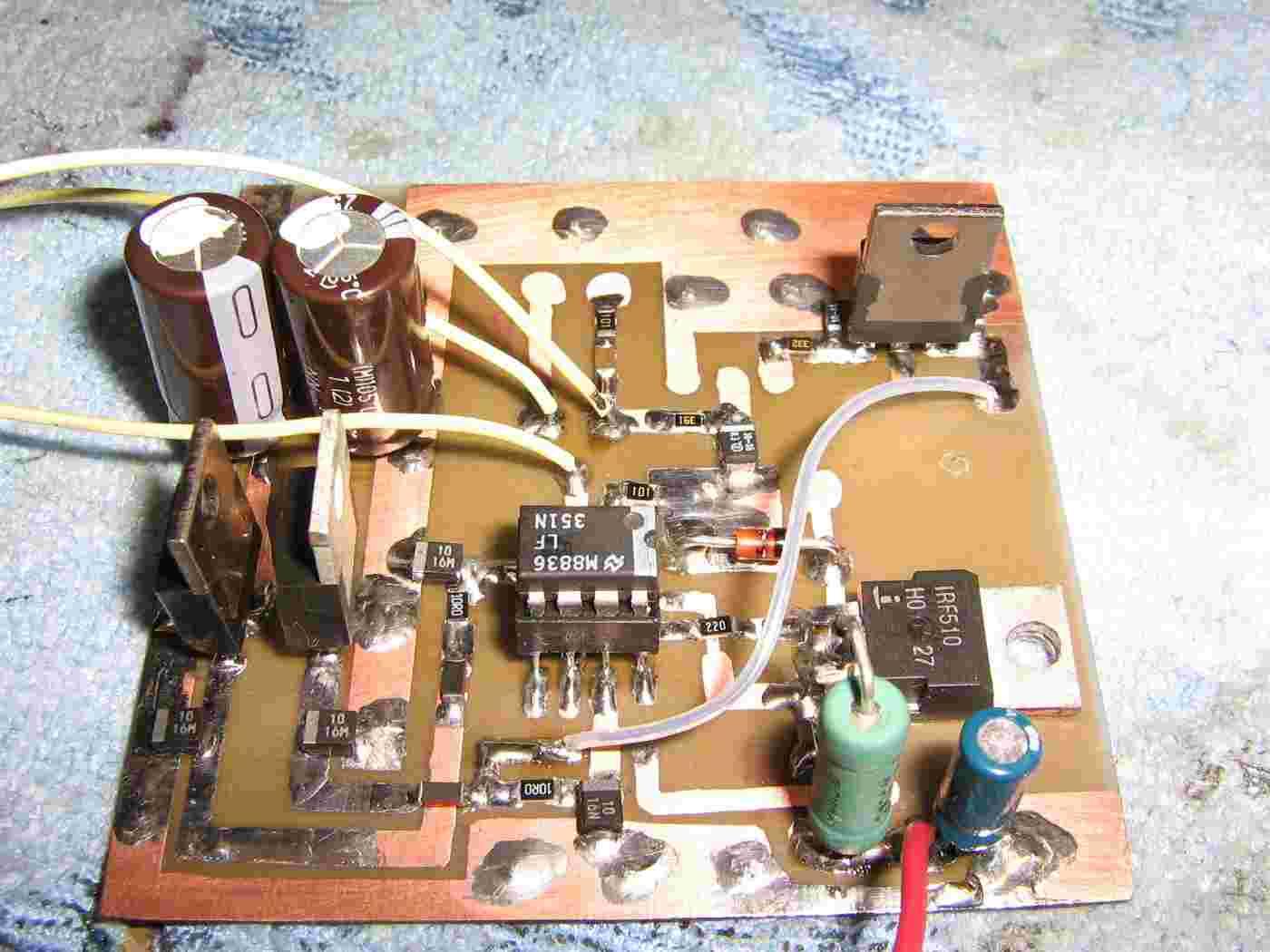 Differs slightly from the original 73 article due to not having all the same parts.  Should work fine though, except for amateur television transmissions. 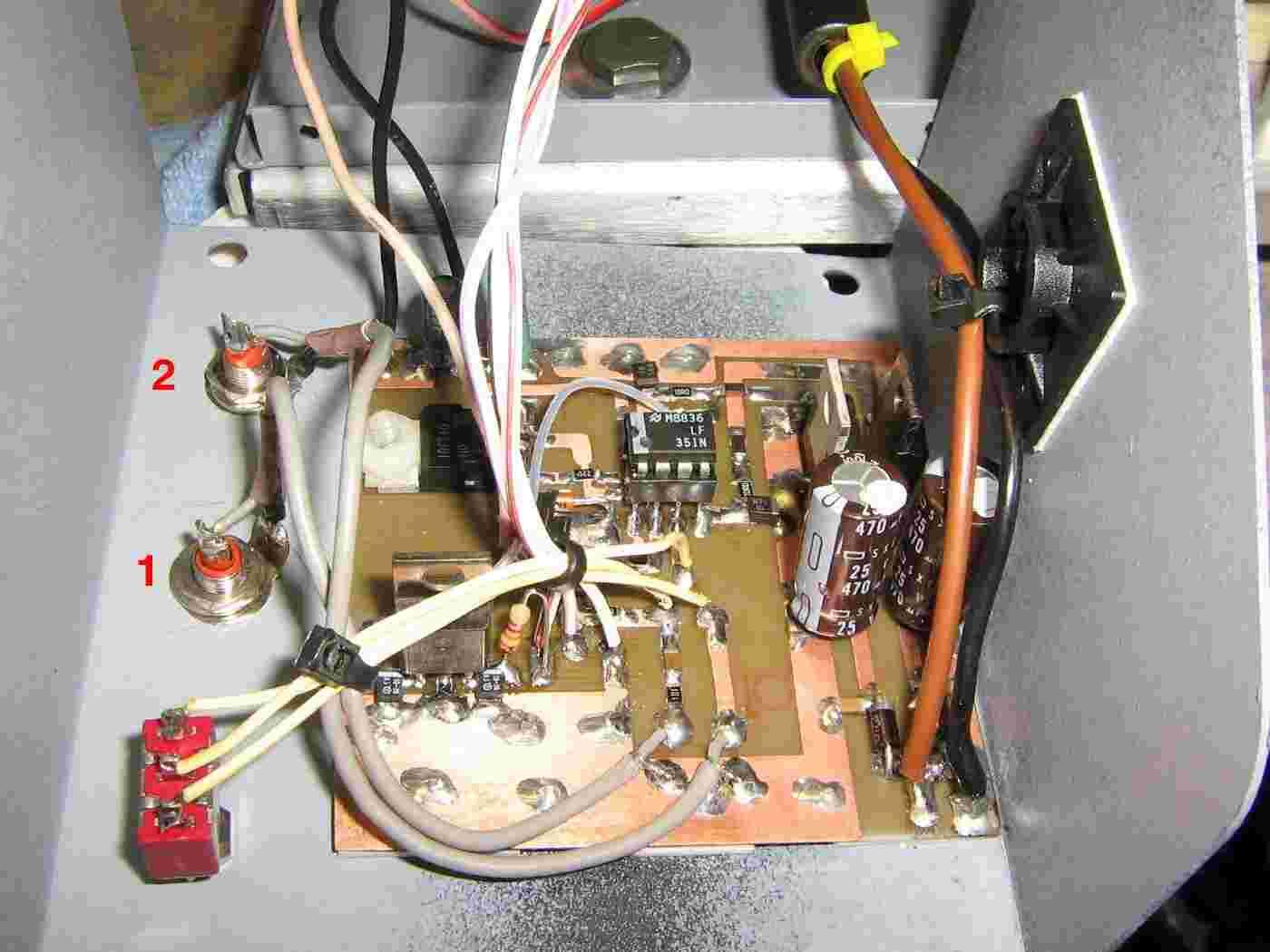 Mounting the control circuit board.

The two phono jack inputs are for external current control and modulation input.  These will be for upcoming projects. 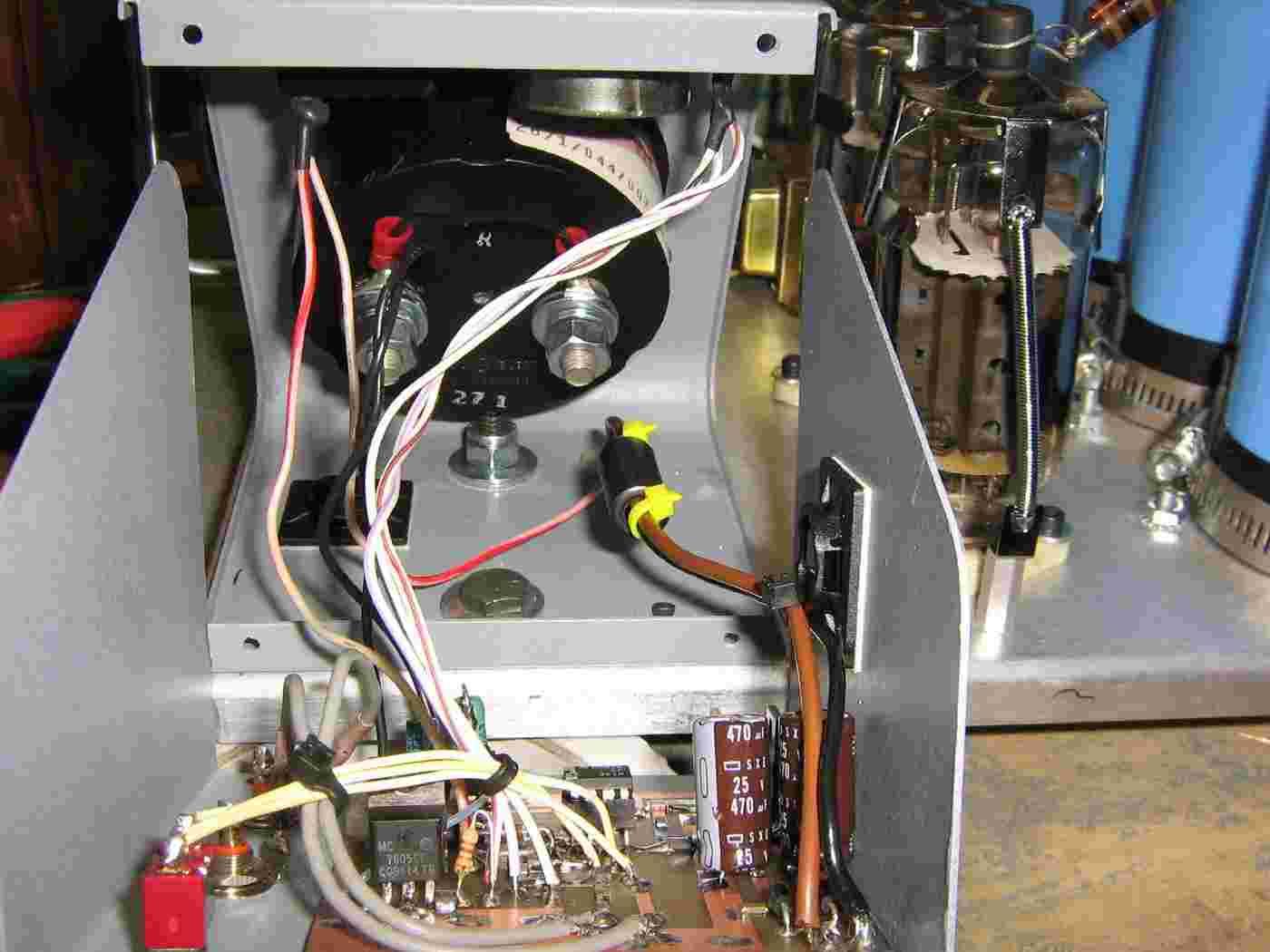 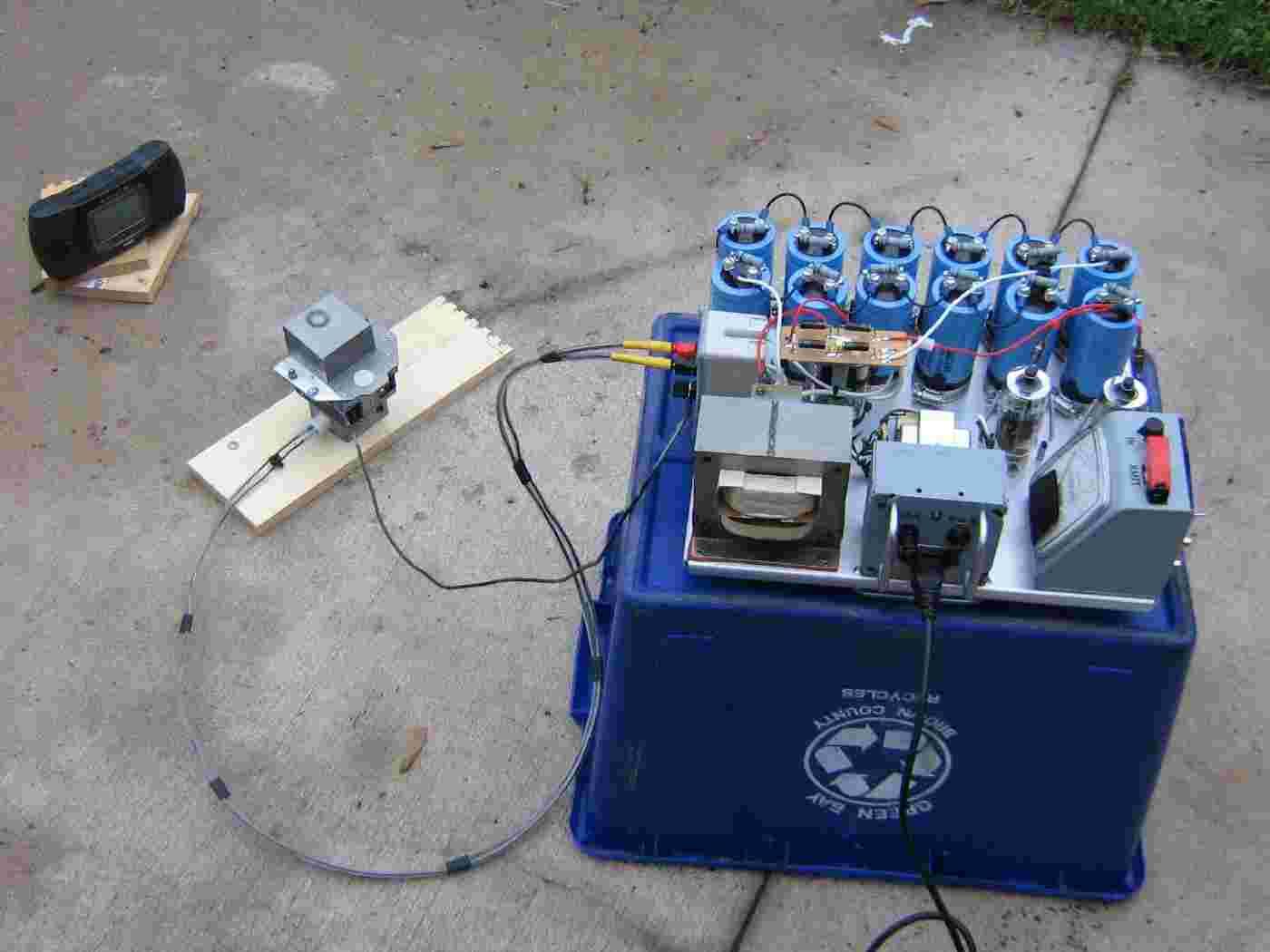 Wasn't sure if it would work or not, but remarkably, everything did check out.

An Atari Lynx is used as a RF output indicator.

The high-voltage lines to the magnetron are run through vinyl tubing for extra insulation. 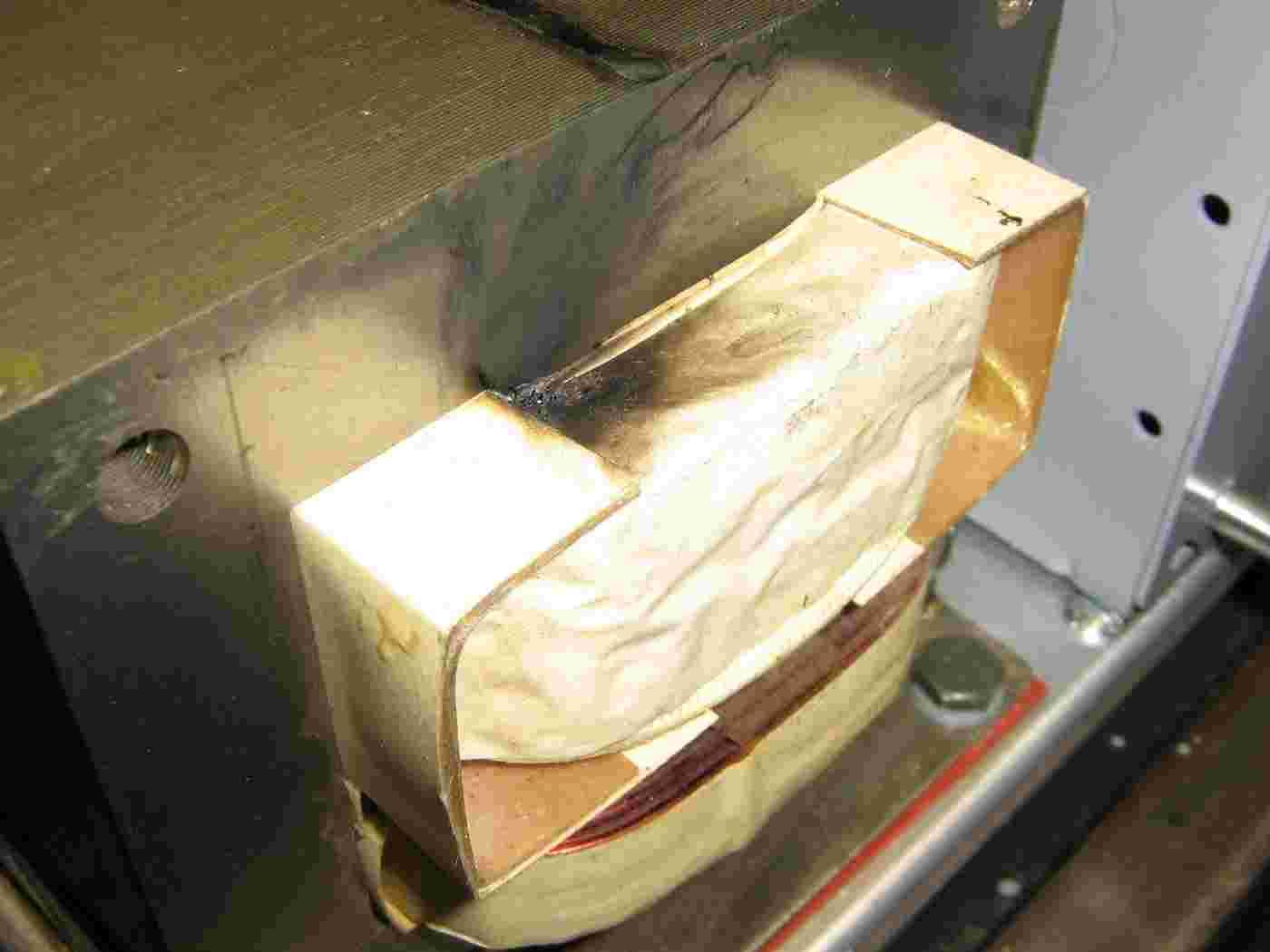 Microwave oven transformers are not really designed for continuous current operations, or for use in "real" high-voltage power supplies.

As you can see here, the high-voltage secondary winding arced over.  Try to find a microwave oven transformer that is physically large or has been coated with some type of resin or sealant. 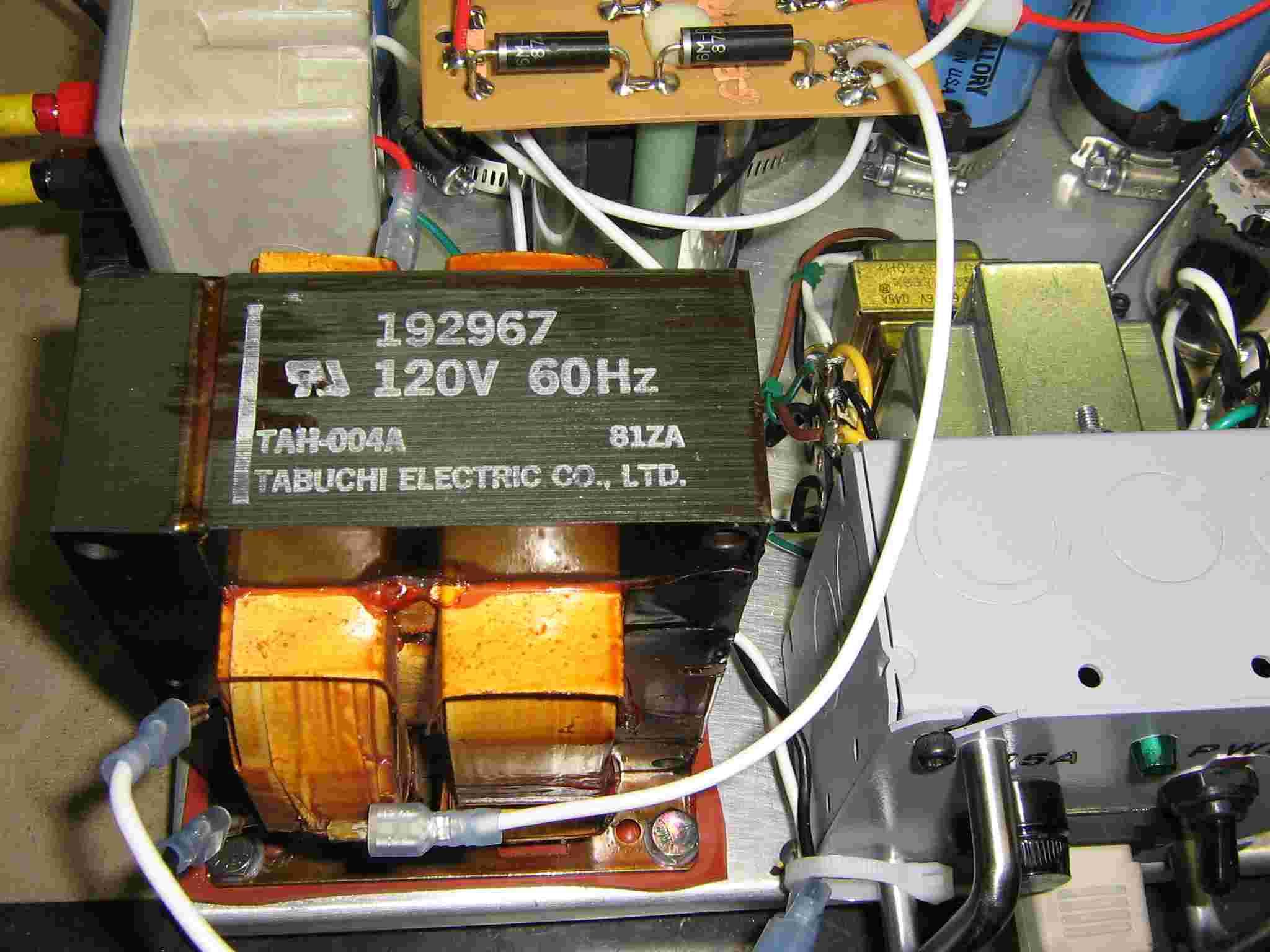 Back up and running with a new microwave oven transformer.

This transformer has been coated with some sort of "goo" to help prevent high-voltage arcing.

All microwave oven transformers are basically the same, so swapping them out should be no problem.  They all seem to have slightly different mounting or wiring configurations, though.

A good secondary high-voltage winding on a microwave oven transformer will usually have a DC resistance between 50 and 120 ohms or so.  The filament winding will have very low DC resistance, often below 1 ohm.  You can use this to check the windings before hand. 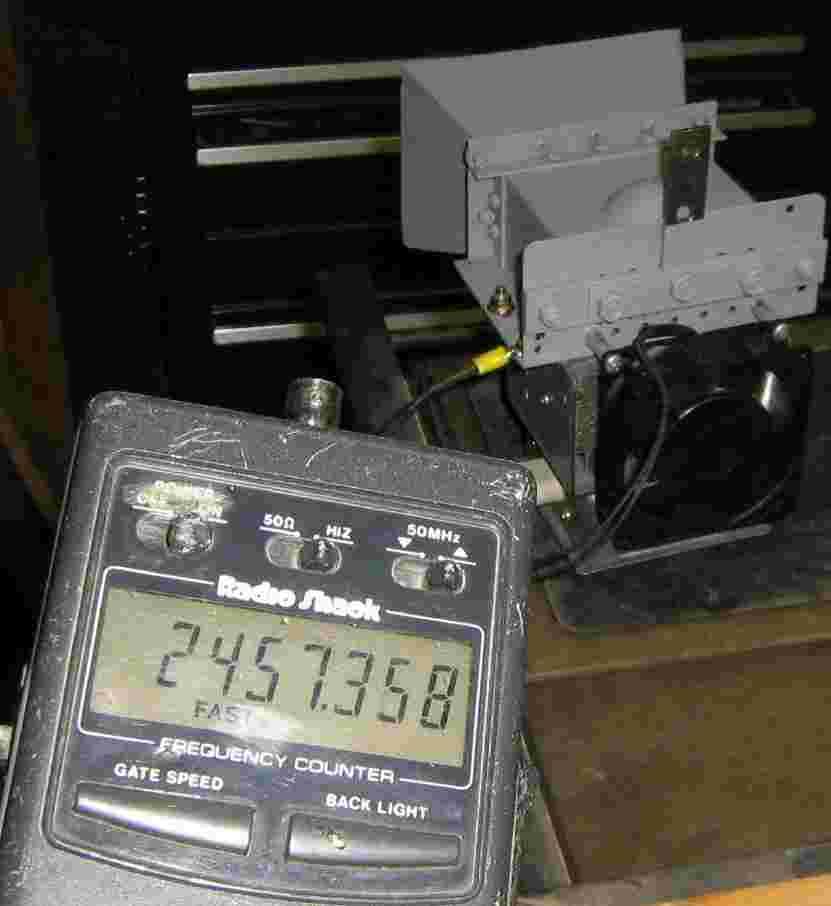 Is it bad when you can get a frequency counter reading, with no antenna, and standing behind the horn? 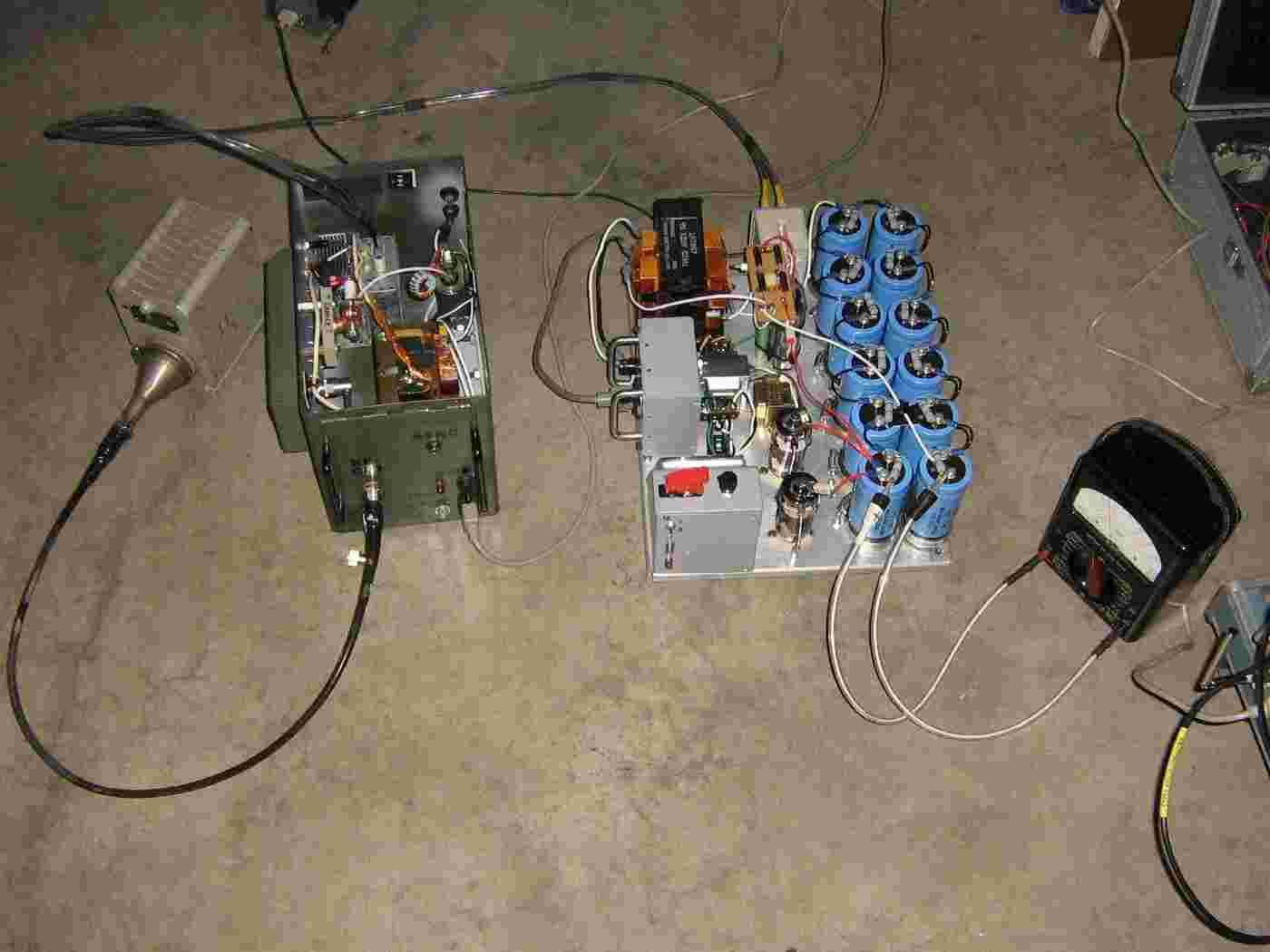 Test setup of the Litton 2M167 magnetron used in the 2.45 GHz Magnetron to Coax Assembly article in GBPPR 'Zine, Issue #46.

This magnetron is being run into a 50 ohm load for testing with a spectrum analyzer.

Spectrum analyzer view of the magnetron's RF output transverted (2.278 GHz LO) to fit the range of an IFR service monitor.  The spectrum display is 1 MHz per division.

On the left, is the output of a Litton 2M167 magnetron.  The meter is reading a center frequency of "135.0 MHz," but this converts to an actual output frequency of 2.413 GHz.  Note the output is about 1 MHz lower than the center reading.  This magnetron was run into a 50 ohm load via a homebrew waveguide-to-coaxial adapter.

On the right, is the output of a Toshiba 2M172 magnetron.  The meter is reading "177.0 MHz," and the signal is about 1.5 MHz higher than the center frequency.  The final output frequency is around 2.4565 GHz.  This magnetron was run into an open horn, so there was alot of background RF noise, which raises the noise floor on the analyzer. 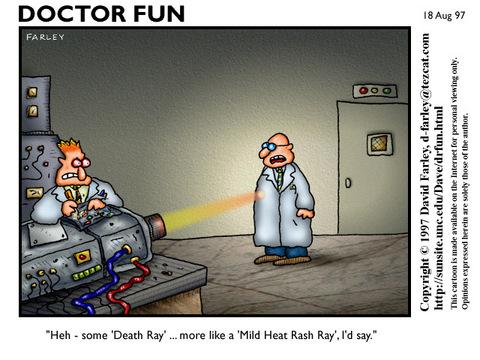 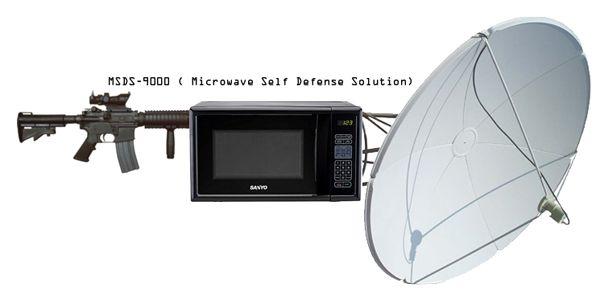