The “Barin Uprising” In East Turkestan

On April 4, 1990, “Barin Uprising” broke out in Barin Township. The purpose of the uprising was to fight against the Chinese occupation of East Turkestan, suppressive Chinese regime and Chinese government’s ethnic cleansing policy towards the Uyghur people. Since the occupation, Chinese government has carried out brutal and inhumane policy in East Turkestan such as arbitrary arrests/torture and execution, violating human rights of the Uyghur people, implementing assimilation policy towards Uyghur people and forbidding practice of Islam, which led Uyghur people to organize the “Barin Uprising.”

Located on southwest of Aktu County in Kasghar Prefecture, Barin township is 17 km away from Aktu city centre. Barin means “old Fort.” Barin with 1,087 square kilometers in size is home to 19,650 Uyghur people, who comprised majority of total population in 1990. Barin township consisted of 74 villages in total and they were governed by 18 government organizations and one police station. Barin was originally a part of Yengisar County, in Kashgar until 1954.

Since the Chinese occupation of East Turkestan in 1949, the Barin people have never given up their fights with the oppressive Chinese Communist Party (CCP). For instance, Aziz Osman and Muhammed Aysa led an uprising on August 16, 1969 against the so – called “Cultural Revolution” of the CCP. 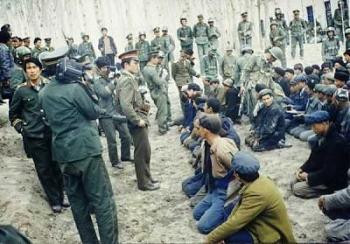 Background of the “Barin Uprising”

In beginning of 1990, there was a widespread resentment among Uyghur people in Barin Township against the oppressive Chinese regime. A number of local Uyghur men such as Zaydin Yusup, Abdugheni Tursun and Jamal Mammet had planned organizing a demonstration against the CCP. However, their plan was discovered by the local Chinese police. On April 4, 1990, approximately 60 police raided into Uyghur homes and interrogated Uyghur people about whereabouts of Zaydun Yusup and Jamal Mammet. On the same day, the police arrested Zaydun and Jamal Mammet.

After the uprising, Chinese government utilizes all quasi- armies in “Bingtuan” (Xinjiang Construction and Production Corporation) in all over East Turkestan and arrested any one in Barin and Aktu regions who were accused of having links with “Barin Terrorism.” Meanwhile, Chinese government cut off East Turkestan from the rest of the world and persecuted Uyghur people by arresting over 2,000 innocent Uyghur people from 10 cities and counties located in Kashgar Prefecture. Those prisoners were accused of participating and funding “Barin Terrorism”, advocating the uprising or having sympathy towards the protestors and hiding protestors. Of the prisoners, over 200 people were executed.

In late August, 1990, Chinese government held sham trails four times for those prisoners and over 103 Uyghur people were sentenced to death, life time and long term prison terms. Their names are as follows:

Later in the year, the Chinese government published some articles about the “Barin Uprising” saying that the Chinese People’s Liberation Army (PLA) in Beijing was in charge of handling the Uprising. Sun Hanliang, a former Communist Party Secretary of Xinjiang Uyghur Autonomous Region said that the Chinese central government, party members and PLA had closely supported each and every step that Xinjiang government took against the ‘Barin Terrorism.” He also said that Chinese President Jiang Zimen, Prime Minister Li Peng and commander of the Chinese Liberation Army, Li Huaqing played very crucial roles in terms of defeating the “terrorists” and they sent telegrams to compliment their good work.