About the Washington Holocaust Memorial opened in 1993

My google search on the Washington Holocaust museum shows it was opened in 1993.  There is an entry there on Allen Ratcliffe born 24 April 1945(1).
Yesterday 27 January 2017 Donald Trump celebrated the Holocaust
Trump célèbre l'holocaust sans mentionner les juifs. 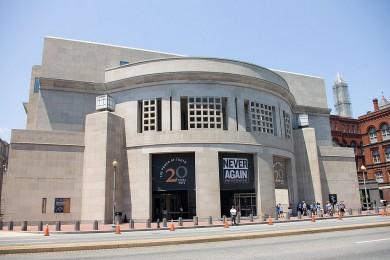 The holcaust refers to  the  genocide against the Jews by the Germans under the nazi regime of Adolf Hitler 1933-1945. Allen Ratcliffe was not a jew; he was arrested in March 1943 at Marquette near Lille with Mr Damermont a postmaster in a network of the French resistance. The Damermonts and his daughter with whom  I assume Allen was friendly or in love,  assisted allied airmen to get back to Britain. Dammermont's daughter was in England at the time active for the resistance.

They were first sent to Loos lez Lille prison then to  Sachsenhausen north of Berlin where the Germans  produced armements. There were up to 65000 prisoners there of which 1300 women in 1943.  When the Russians approached, the Germans evacuated the prisoners. Allen and Mr Damermont were sent to Struthof-Nachweiler in Alsace.
From there they were sent to the  Annexe camp nearby Kochendorf; they were to work on buildng facilities for producing Henkel air plane engines, in a 200m deep salt mine; this camp was set up in 1944 and lasted until 25 March 1945. When the allies (americans) approached, the prisoners were evacuated to Dachau in one of the famous death marches. This one is related here in German; they arrived in Dachau on 29 March 1945.
When liberated by the Americans on 29 April 1945, Allen was free but to weak - he probably had typhus (death certificate declares tuberculosis)  - to be evacuated; he died in hospital on June 1945 and was buried in Dachau cemetary. His body was repatriated to Calais only in 1947 after 2 years of administrative formalities .

The US Holocaust museum has searched for names in the different camps; these names are  listed by the International Tracing Services at Arolsen and are available now on different sites.

I got these details because a cousin of Guy, Allen's brother,  visited  Struthof-Nachweiler  in Alsace; there is  a list of names  in a memory book. He knew Allen had transited there because his mother, wife of a cousin of Allen who also was also caught in this war, knew it (see this story). He  asked if there was a name Ratcliffe and was told "YES". He got details later by request. But the details were incomplete.  Another friend with whom I am in contact got further  details from the  International Tracing Services ie. place and date of death and the plot number of his grave in Dachau.
More: