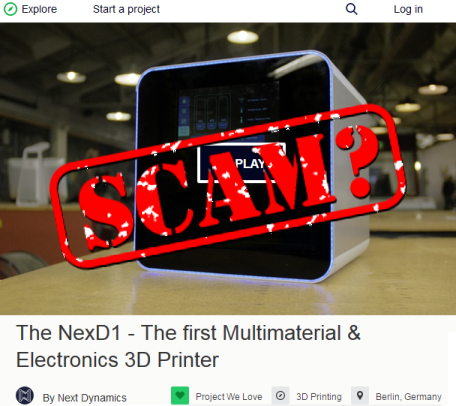 If you made a pledge to this project, you deserve to know some backers have uncovered indications prints in the videos may have been faked, and the creator may be misleading everyone as to how developed the machine is.

Most of the content here is from the project's own comments, and it's highly recommended you review them for yourself.

It all started with a visit by backer KRS to the Next Dynamics office:

He gave a long report with encouraging findings, but raised a warning flag that he wasn't able to actually witness a print:

Next, the designer of a part featured in one of their updates came forward with concerns they used her copyrighted design without permission, and may have even ordered the part from Shapeways and passed it off as their own: 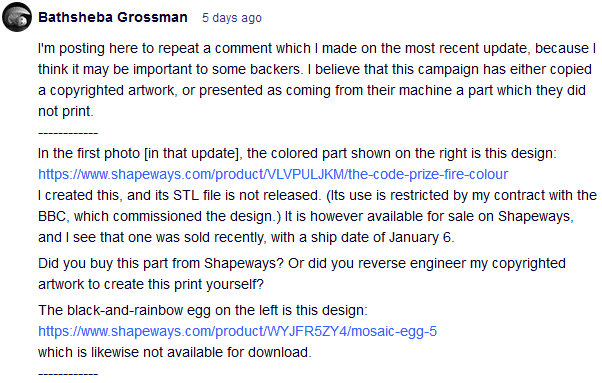 This is the part Next Dynamics said they printed: 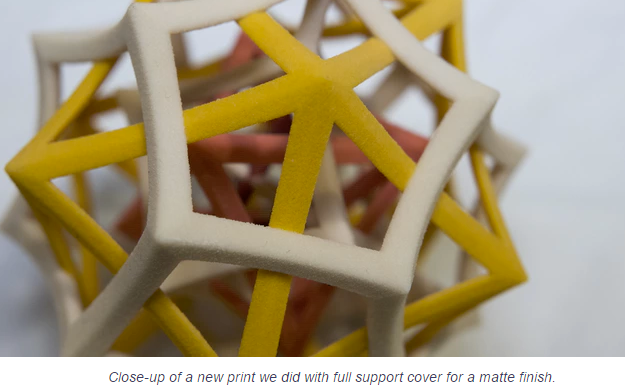 Here's the one on Shapeways: 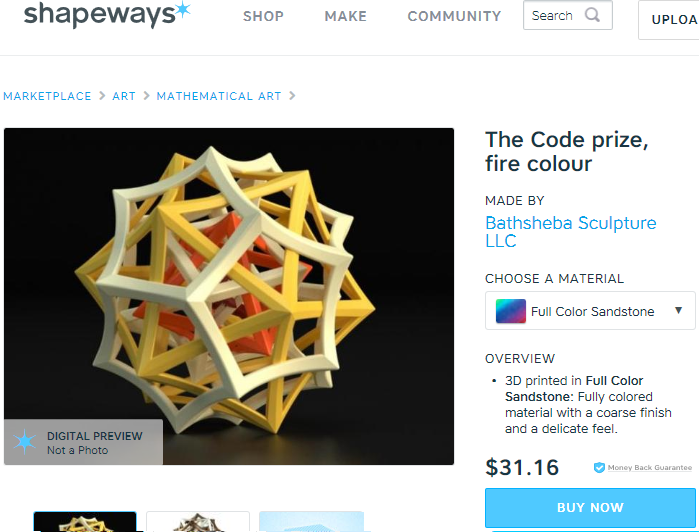 A video featuring a colored egg was also seen: 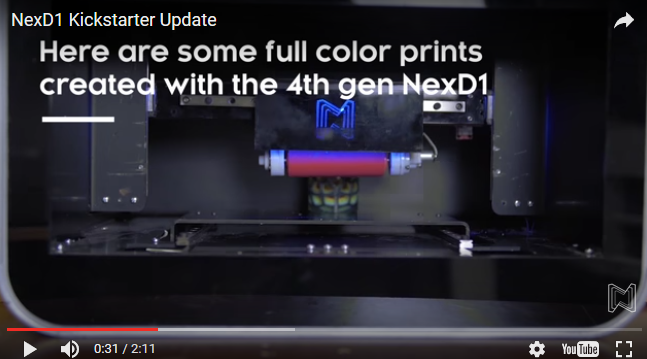 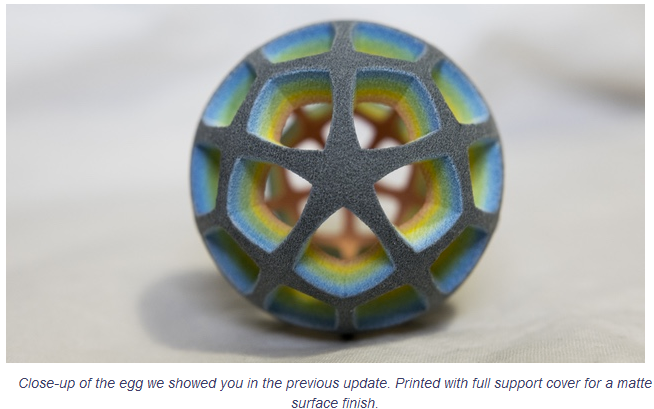 It's on Shapeways, too: 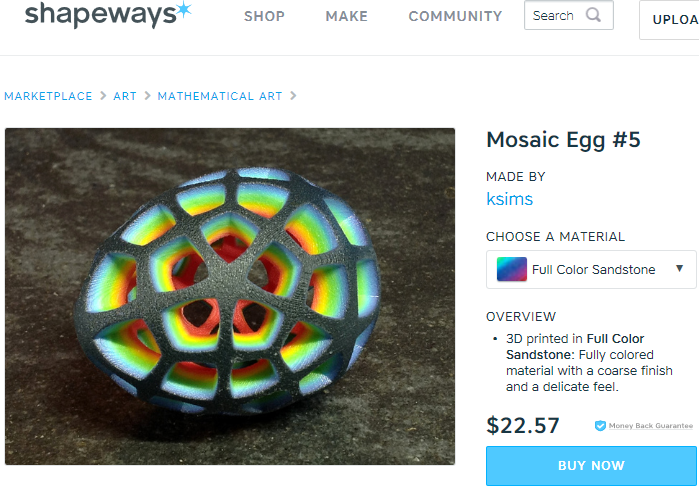 A number of people have suggested the egg from Shapeways was used to fake the video, by placing it behind the print head so that it was revealed as the head moved up.

They think the surface texture of the parts looks more like you would get on a sandstone print from Shapeways than from a resin-based PolyJet printer, and the muted coloring of the Next Dynamics egg could be from a coating applied to protect it from dissolving in water.

Various other discrepancies are noted, in the movements of the build platform, differences between camera shots, layer lines of the prints, and finish on these parts compared to those previously shown. Some seeds of speculation were sown even before the KRS trip.  The cross section view from above the egg is also discussed. 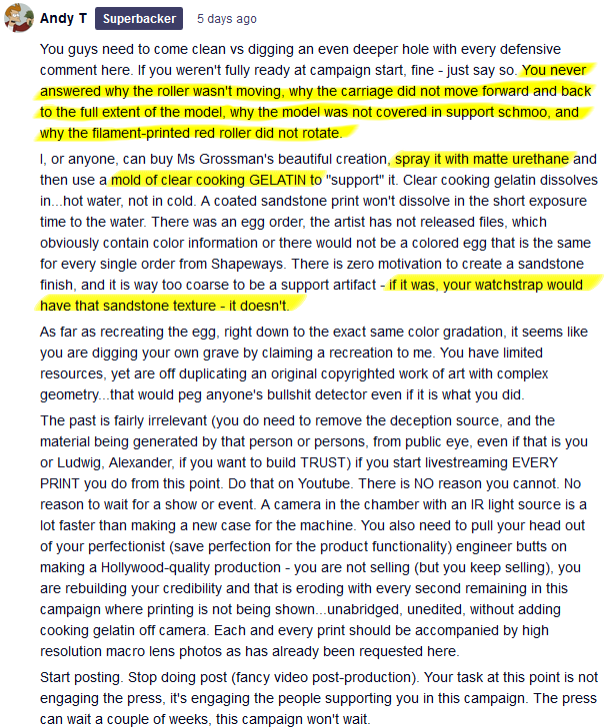 On the other hand, one commenter lends a possible explanation for the grainy finish:

Another user did some math leaving him skeptical about the timing in the video: 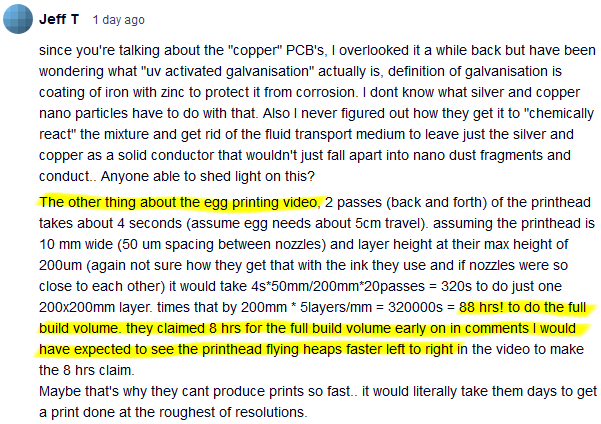 While some of this could be nothing more than speculation from backers naturally paranoid of getting burned, it's interesting to note a recent sale was reported for both parts, matching the configurations seen in the videos:

These are complex models, and neither design files are publicly available. In order to create the prints, Next Dynamics would have had to obtain the files from their owners (who reportedly deny providing them), or reverse engineer and replicate the parts from scratch. Some backers have demanded they release the CAD files (or even footage of the models in a CAD tool) to lend credence to claims the parts came from their machine:

But so far they haven't done so, citing copyright concerns:

In fairness, the video does appear to show a rendered view of the egg which looks to have different color tones than the 3D model hosted at Shapeways:

And they provided some explanation to early questions on surface finish and print head movement:

As well as remarks on CAD files and a few other things:

Although they haven't said where they got the files for the two specific models in question, and more recently have gone mostly silent as skepticism mounts and the campaign reaches its final days.

In another weird twist, early in the campaign someone involved with the project was pretending to be a regular Kickstarter user:

Until it was later revealed he's an investor in the project.  Some backers felt this was fishy behavior which went against the Kickstarter terms and policies.

He's steadfastly stuck up for the team, although some of his comments haven't been well-received:

He promised a live feed of a print at an open doors event in London and Berlin this week, but it doesn’t look like that will happen. 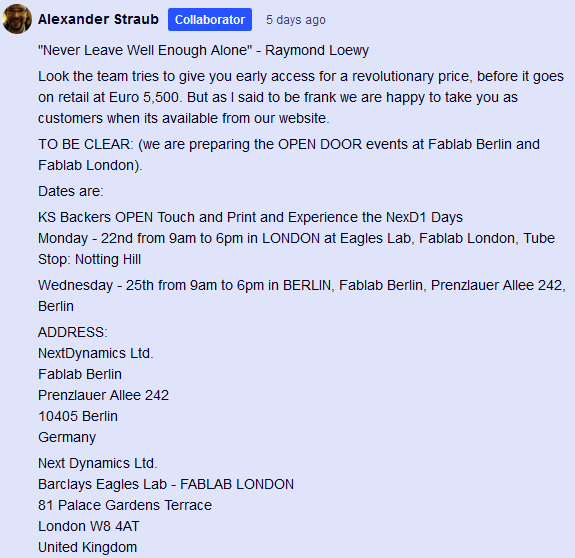 (Note the date for the 22nd is not a Monday, and was later corrected to the 23rd)

Either way, it's clear the team is feeling a little frayed around the edges: 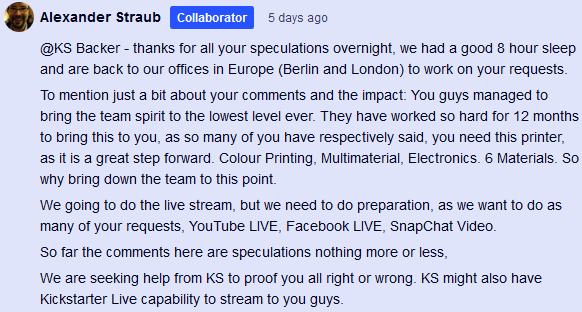 And one of the team members originally featured on the campaign page appears to have left the project, with her picture dropping off sometime between.January 18 and January 20 (around the same time the controversy reached critical mass).

Other questionable points have been raised, some in forums outside of Kickstarter and dating back to before the campaign: 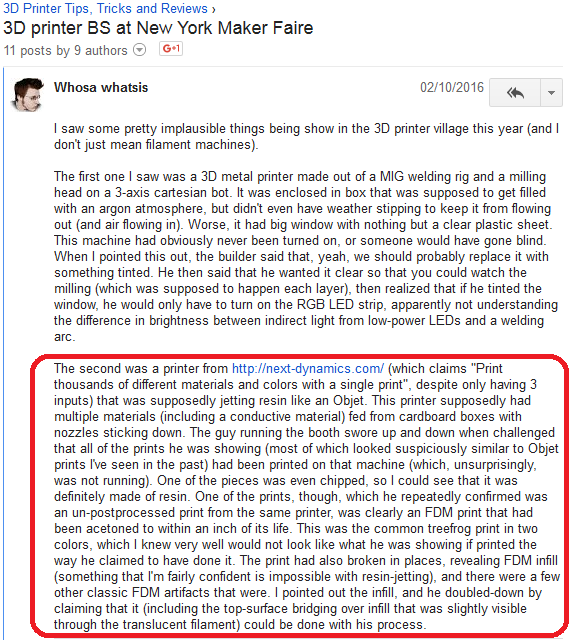 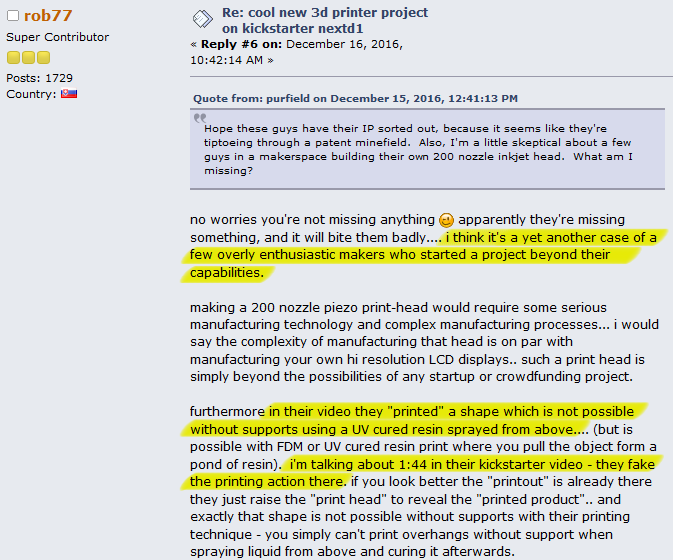 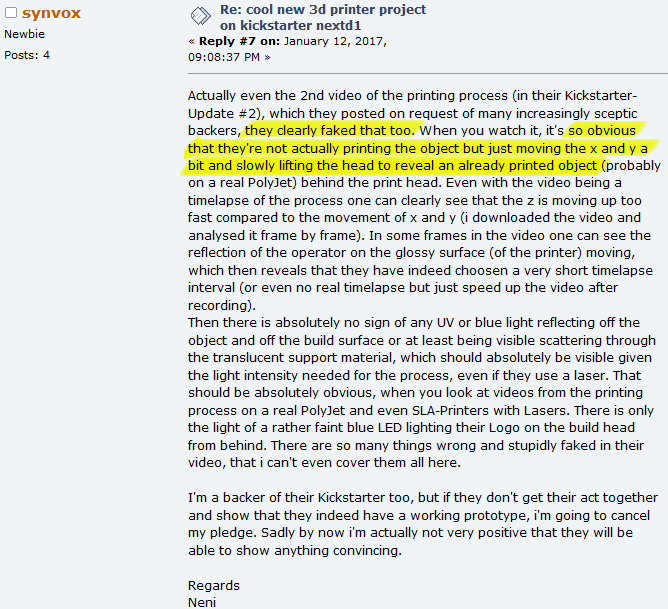 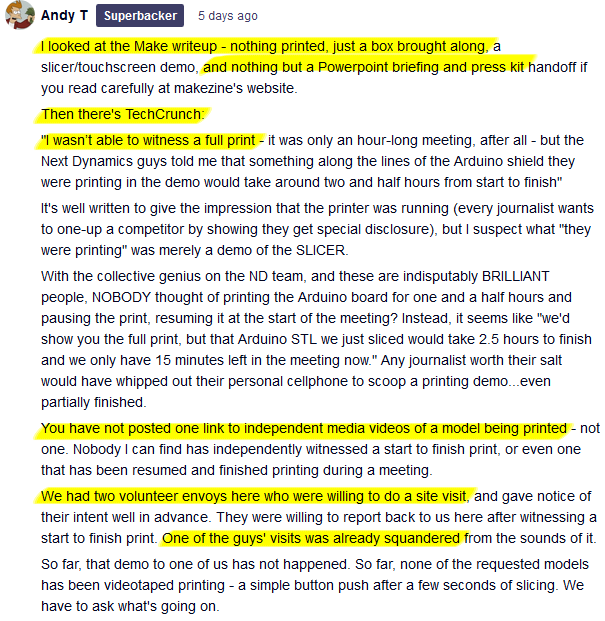 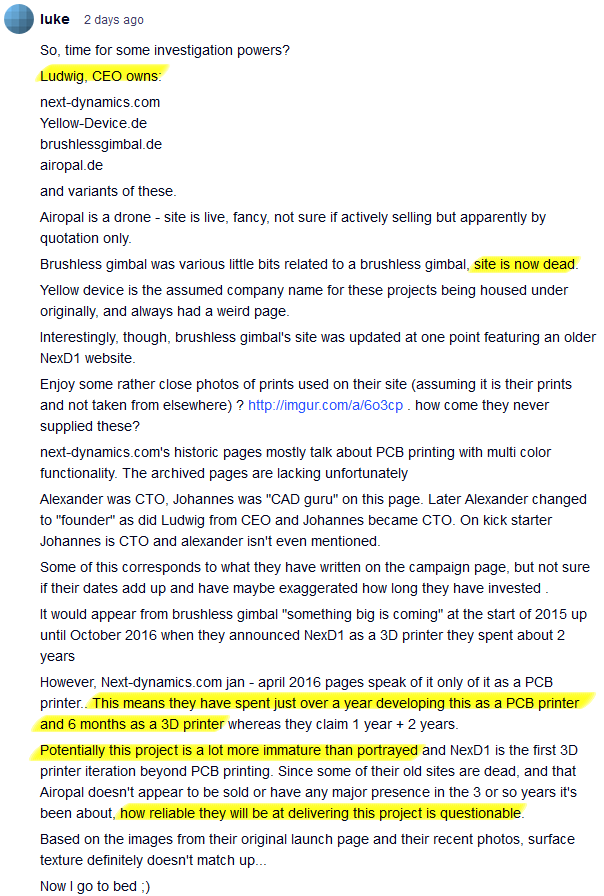 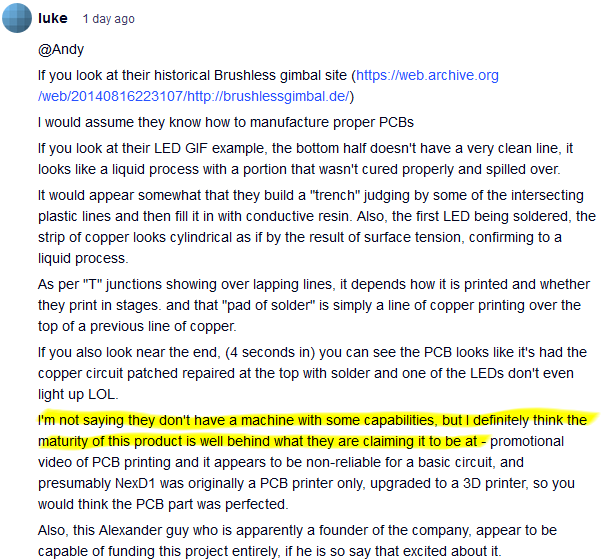 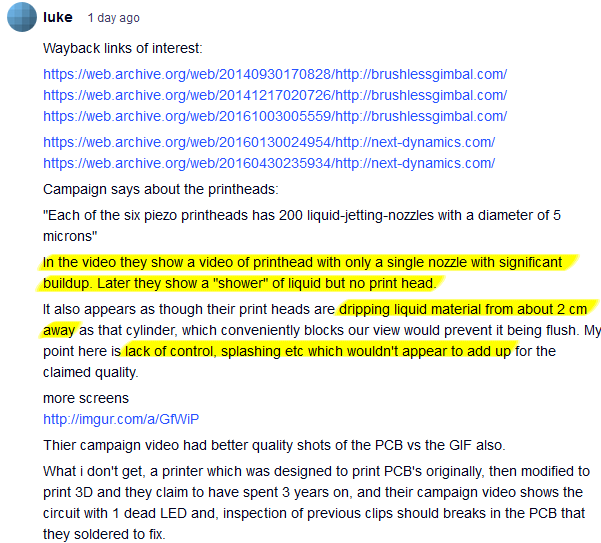 Now the company's own forums look to have been shut down or wiped.

And backers are starting to jump ship, with some reporting the project to Kickstarter: 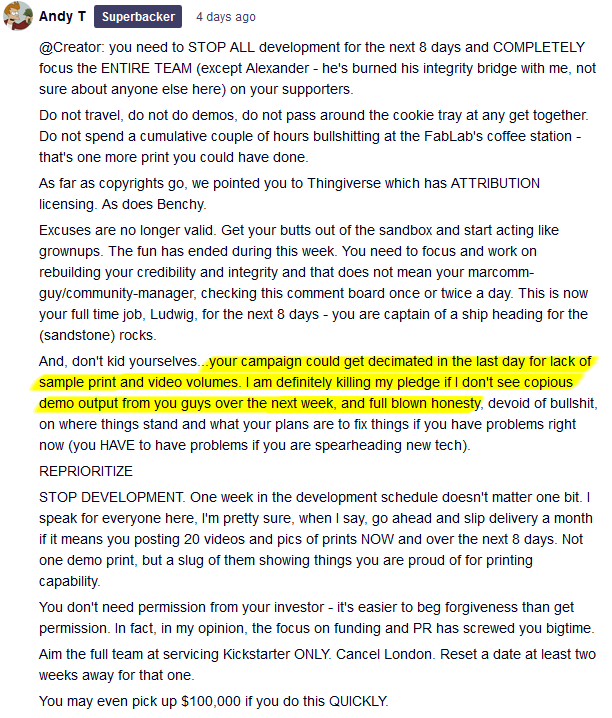 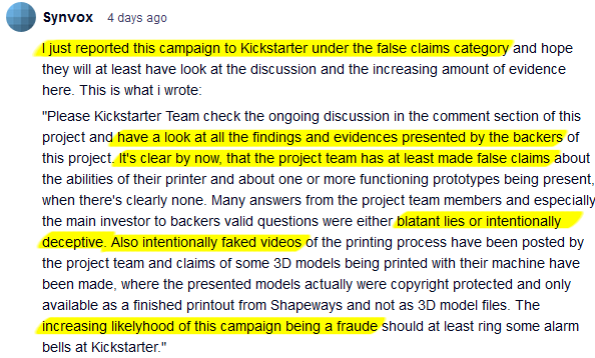 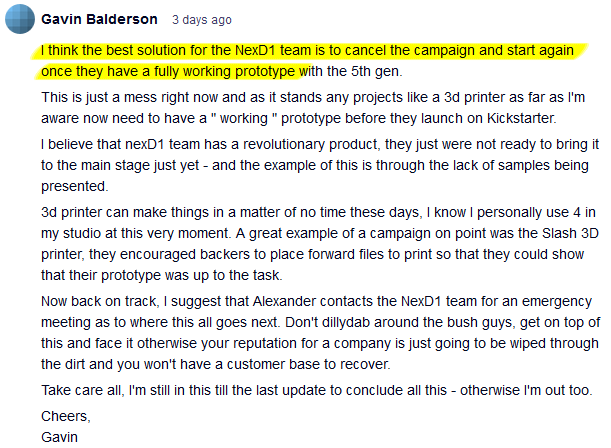 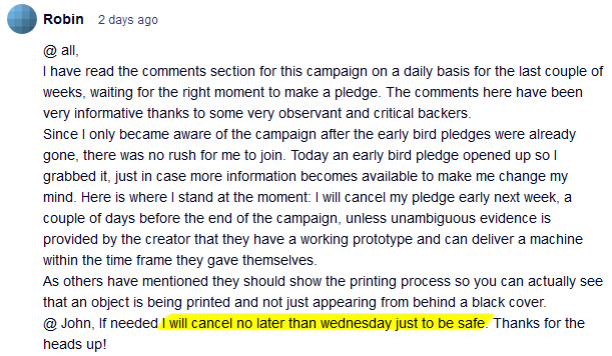 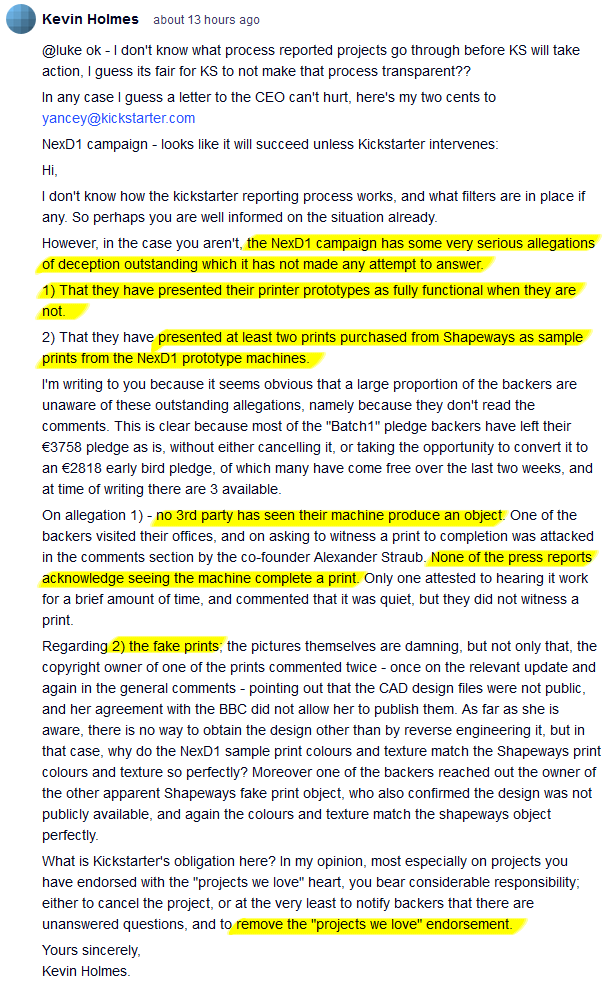 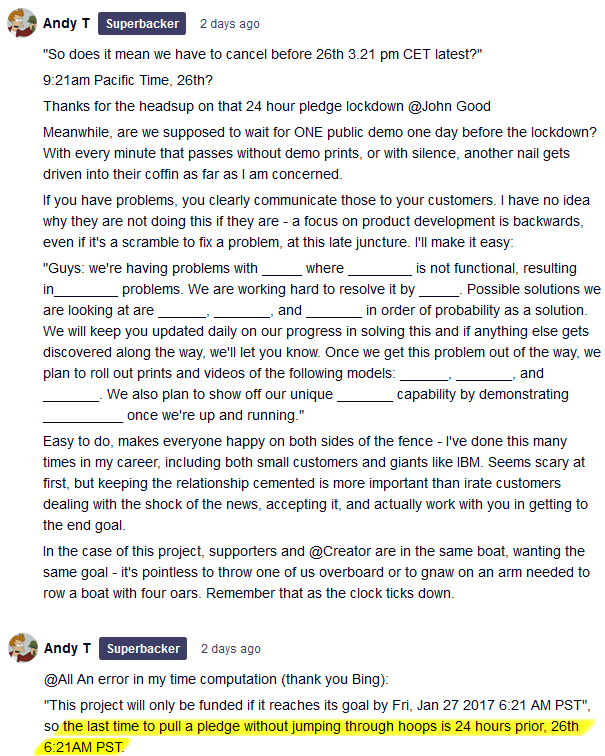 Here's a funding chart (click to go to live version):

As pledges dropped off, the company posted an update acknowledging trust had been diminished, and scheduled a livestream for Tuesday afternoon (Jan 24) to broadcast prints suggested by the community - then didn't show up for it.

They did release new videos filmed from inside the device as it operates, which are being discussed in the comments thread.

Media outlets are picking up on the story, and a submission to Slashdot is pending.

So, in conclusion, what's a poor backer to do?

No doubt there will be a last-minute attempt by Next Dynamics to validate their claims and avert a massive funding exodus.

When that happens, you should view what they're saying with a very critical eye, and to see if the skeptics are satisfied.

The team has obviously put a lot of work into the project and it could be the concerns are overrated.

If you ultimately choose to cancel your pledge, make sure to do so at least 24 hours before the campaign ends, otherwise Kickstarter may lock in your funds.

Update: There are further developments. If someone creates a "Part 2" to this it will be linked here.