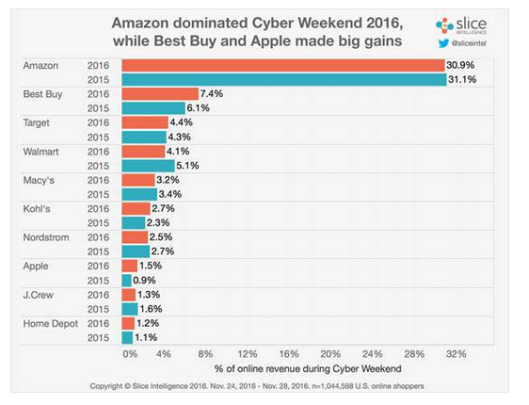 According to new data by Slice Intelligence, which scanned more than 1 million online shopping receipts from Thanksgiving through Cyber Monday, Amazon accounted for 30.9 percent of sales. It was followed by Best Buy at 7.4 percent, Target at 4.4 percent, and Wal-Mart at 4.1 percent.

Amazon’s Prime membership is up 23% from a year ago, according to new data from Cowen & Co.

Amazon.com doesn’t disclose its Prime membership count, so Cowen bases its estimate off a panel of 2,500 U.S. consumers. Some 45% of that panel now has Prime, which translates to 49.5 million total consumers, Cowen estimates, up 23% from a year ago, when the firm estimated 40 million Prime subscriptions.

Other Data from Cowen’s Report

Amazon.com Inc. generated about 60% of total U.S. online sales growth in 2015 far outpacing the competition, according to data compiled by Forrester Research.

“Amazon makes up a larger percentage of e-commerce in the U.S. than any other player, and its retail growth has outpaced overall online retail,” Forrester Research wrote in a recent report, titled “U.S. Online Retail Forecast: 2015 to 2020.” 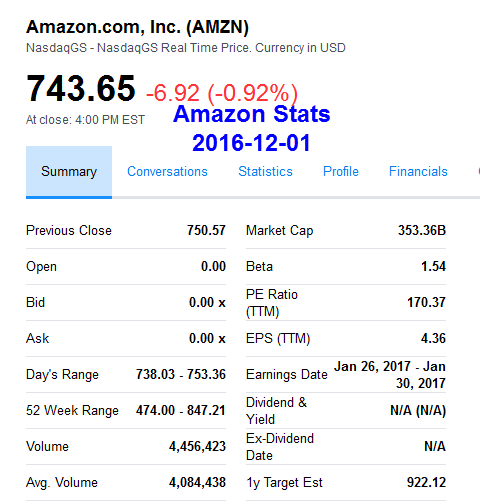 Above data from Yahoo Finance. 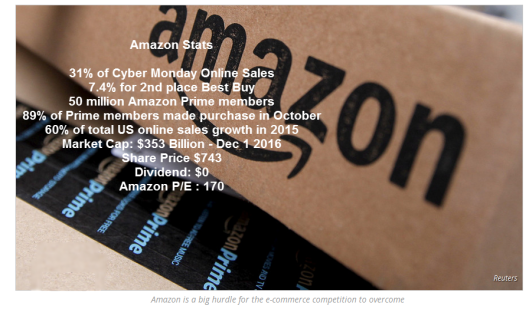 Disclaimer: The content on this site is provided as general information only and should not be taken as investment advice. All site content, including advertisements, shall not be construed as a recommendation to buy or sell any security or financial instrument, or to participate in any particular trading or investment strategy. The ideas expressed on this site are solely the opinions of the author(s) and do not necessarily represent the opinions of sponsors or firms affiliated with the author(s). The author may or may not have a position in any company or advertiser referenced above. Any action that you take as a result of information, analysis, or advertisement on this site is ultimately your responsibility. Consult your investment adviser before making any investment decisions.