The official website for Warner Bros. Japan's live-action film of Ken Wakui's Tokyo Revengers manga began streaming a third character promotional video for the film on Anime Nonton TV Wednesday. The video highlights Takemichi and Atsushi (Akkun). Previous character videos focused on Takemichi and Naoto and Takemichi and Hinata. A new character video is debuting every week in the weeks leading up to the film's opening. 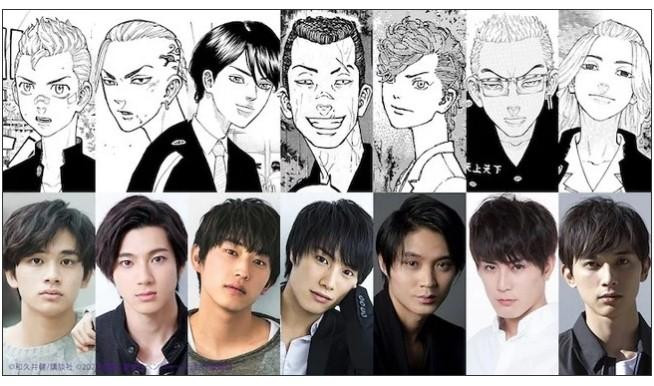 The film was slated to open in Japan on October 9 last year, but was delayed to 2021 due to the effects of the spread of the new coronavirus disease (COVID-19) in Japan. The production halted filming in April 2020 due to COVID-19. The film will now open on July 9. Tsutomu Hanabusa (live-action Kakegurui, Miseinen dakedo Kodomo ja Nai) is directing the film. Rock band SUPER BEAVER is performing the film's theme song "Namae o Yobu yo" (I'll Call Your Name).

The cast includes (from left to right in image above):

Mio Imada (seen below) will play the role of heroine Hinata Tachibana in the film.

Gordon Maeda (left in image below) will play the character Takashi Mitsuya, the leader of the second squad of the Tokyo Manji Gang. Hiroya Shimizu (right) will play Shūji Hanma, a mysterious delinquent who works secretly with Kisaki.

Kodansha Comics is publishing the manga digitally in English, and it describes the story:

Watching the news, Takemichi Hanagaki learns that his girlfriend from way back in middle school, Hinata Tachibana, has died. The only girlfriend he ever had was just killed by a villainous group known as the Tokyo Manji Gang. He lives in a crappy apartment with thin walls, and his six-years-younger boss treats him like an idiot. Plus, he's a complete and total virgin … At the height of his rock-bottom life, he suddenly time-leaps twelve years back to his middle school days!! To save Hinata, and change the life he spent running away, hopeless part-timer Takemichi must aim for the top of Kanto's most sinister delinquent gang!!

Wakui serialized the Shinjuku Swan manga in Kodansha's Young Magazine from 2005 to 2013 with 38 volumes. The manga inspired a six-episode live-action television series in 2007 and two live-action movies in May 2015 and January 2016. The manga is also inspiring a television anime adaptation in 2021.