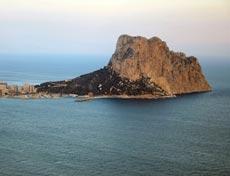 The Costa Blanca towns of Javea, Denia, Moraira and Calpe are often overlooked as holiday destinations for UK tourists. For many people Benidorm is the first place to come to mind with it’s high-rise hotels and apartment buildings, over-crowded beaches, British bars, fish & chips, and a lively and often noisy night life.

The Costa Blanca still has much more to offer. Calpe is one such example. It also has apartment buildings and hotels, but is not as large as Benidorm just a few miles down the coast, and does not suffer from over-crowding. The town itself lies along the coastline beginning at the “old town” at the top of a hill. This part of town is full of narrow streets and passageways, old houses and shops and the church. As you get nearer the beach the buildings and shops become larger and more modern. The shopping area extends all the way to the Arenal Beach which leads to the port.

The port area of Calpe boasts the “Penon de Ifach” which at first glance looks like a smaller version of the Rock of Gilbralter. The only way to reach the top of the rock is by footpath, but you are rewarded with stunning views over the entire Northern Costa Blanca, but make sure you allow a couple of hours to get up there, and another couple of hours to get back down again.

At the base of the rock are Calpe’s famous fish restaurants. They all display a selection of locally caught fish in chilled cabinets outside their restaurants, often with waiters offering passers-by a glass of complimentary Sangria in the hope that you will go in and try their food. The fish dishes served in these restaurants are made from fish caught by Calpe’s own fishing fleet. You can’t get much fresher than that.

On the other side of the Rock are most of the holiday apartments and hotels built alongside the Levante Beach. This is where you will find many of the bars and restaurants that are open late into the night. Both of the main beaches have their own water sports ranging from water-skiing to parascending.

If you want to see other parts of the area Calpe is a good place to stay as it is located only half an hours drive from most parts of the Northern Costa Blanca. There are a number of car rental outlets in the town, as well as at Alicante airport. If you do not want to drive there are several ferry services that run from the port to Benidorm, Javea, Denia and Altea, and some parts of the coastline can only be seen from the sea, or in some cases under it, as some of the boats have glass bottoms.

In Calpe port the “Submariner” is instantly recognisable by it’s yellow paintwork, in fact it’s known by the locals as the “Yellow Submarine”. It is not actually a submarine, but a catamaran with glass panels in the hull so passengers can see the marine life around the base of the Rock. A trip on this boat lasts about an hour and takes you round the far side of the Rock and back to the port.

Calpe has the best of both worlds. It has nightlife, shopping and beaches, but still maintains the atmosphere of a small resort.