First two videos from between Adjabiya and Benghazi today, forces pulling back from shelling with GRAD rockets late in the day, March 18th, near Sultan: 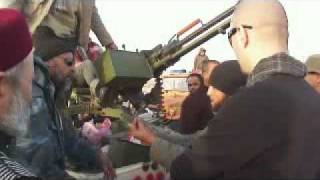 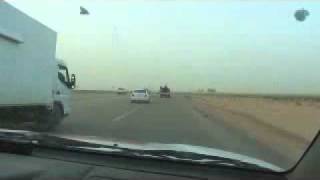 Why is now one mentioning what is happening in Misrata?Why this silence? Where is the media ?Misrata is aching suffering dying! Ther is no time left! Please ls tell the UN Security Council that Gaddafi doesn't care about the resolution he said it is just ink on paper.He is bombing everywhere - Zintan, Alazawiya, Misrata. We want our media to mobilize; please help us! Gaddafi is making massacres, eliminating the Libyan people. He is entering with tanks not only troop soldier. He is bonbing civilians area. Saif said, we need proper sources, not rumors. He doesn't fear the resolution and he is proving that now. Saif said that the resolution is just a paper, nothing else. He doesn't care about the UN resolution.

Here is some urgent news about things around Benghazi and Ajdabiya:
Ok today Gerdaffi actually announced that he will cease fire, but what is going on here is exactly the opposite.
He is bombing where ever he can. Right now, there are Gerdaffi troops not very far from Benghazi , in an area called sultan , its between Ajdabiya and benghazi the troops are using Grad rockets the troops are actually trapped there because they cant move towards benghazi and they cant go back to Ajdabiya, so they are shooting at an area called magroun which is not far from benghazi,

but our brave men have gathered themselves and they mooving towards the Gerdaffi troops which are at the end of their ammunition,

so inshalah we are going to have good news later tonight. Gerdaffi is trying but the luck wont be on his side , God is with us , and inshalah, victory is soon.

Gaddafi forces entereda hospital  and killed the injured. Massacres are happening here! The situation is very critical - there are airstrikes and artillery barrages. (The reporter is looking at the sky while talking, watching for an airstirke... 50 km outside of Benghazi)

Suluq supplies Benghazi with water...Benghazi has no water....is anyone aware of Gaddafi's intention to eliminate his people? Where and when is the UN resolution to be implemented? The resolution calls for civilian protection! The crazy one is killing us! Where are you, France? We have no one but God with us! Gaddafi is crazy with power and hunger!

Al Jazeera : There have been powercuts arouns Benghazi; Gaddafi forces have launched a assault 50 km from Benghazi. Loyalist forces are clashing with freedom fighters near Al-Magroun and Suluq.