Why Ruskin Bond will always remain our favorite 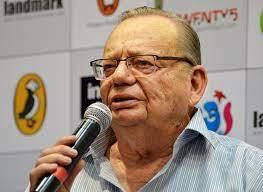 From our early school days to the age of stepping into our respective career paths - we all grow up undergoing many changes. But only the writings of Ruskin Bond remain our constant companion. The close relationship between Ruskin Bond and us emerged slowly. The first introduction happened through textbooks, mostly after which people regularly saw a curious kid sitting at the corner of a bookstore with amazement in his eyes. And this amazement continued to appear on our faces every time we opened a book by Ruskin Bond. Unknowingly, we formed a strong bond with our favorite, Ruskin Bond.

It's pretty impossible not to smell the hills, our childhood, winter breezes, the old and rusty cottages in his words. Ruskin Bond's stories feel like a legit time machine that never fails to transport us into a newer world or the world of the past. His stories made us enjoy natural affection, subtleties, and the lucid pleasures of life without delving into the materialistic way of living. So, let's try to get lost in the world of Bond and relive our sweetest memories again to remind ourselves why he will always be our most favourite.

Nature as its best

Due to his intimate understanding of nature, Ruskin Bond successfully presents how nature could actively become a significant part of a person's well-being. We can't help feeling the solitude and the peaceful purity of being amidst the forlorn mountains, the Magpies, the beautiful forest birds, and the freshness of trees while reading his stories. Nature in his reports does not only provide background, but it becomes a character itself. He allows the free-flowing river, the little birds, the wildflowers, the sky, and every aspect of nature to convey their own messages to the readers.

That's why we perceive nature as a catalyst for healing our minds and making us transcend in the spiritual world. So, in most of his stories, he tries to convey the message of preserving nature. For example, in "The Coral Tree," Ruskin Bond has painted an essential aspect of teaching children the importance of planting and nurturing trees, thus, making a lasting partnership with man and nature.

Many great critics of our generation have declared the significant presence of the pantheistic nature approach in Bond's writings. He profoundly portrays both the nurturing and the destructive sides of Nature in his stories like "The Blue Umbrella," "Time Stops at Shamli," "The Angry River," "Rain in the Mountains," "Roads to Mussoorie," "The Room on the Roof" and many others. It's evidently clear that nature is the Muse of Ruskin Bond, and he will continue to strengthen the friendship between us and nature.

One of the most captivating qualities of Bond's stories that make them so relatable is his art of characterization. He amazingly creates a fellowship between the reader and the characters by presenting various characters and showing every character's development through the thick and thin of life. The most amazing part is that his feelings are rooted in reality and possess a breadth of genuineness without pretensions.

Ruskin Bond is the master of creating various characters who fall into every social and economic background of the vast spectrum of our society. He beautifully paints the difference between the characters belonging to both the backward and underprivileged class and the flourishing upper-class. But most surprisingly, each character's life becomes significantly inspiring to the readers because of their physical and mental struggles, their realization and acceptance, and their close connection with their conscience. Our eyes suddenly get wet whenever we go through the brief encounter of the two potential lovers in "The Eyes are not Here." Similarly, we feel the same adrenaline rush while witnessing Binya's adventurous journey down the stream to save her most precious possession in "The Blue Umbrella."

Ruskin Bond's excellent insight into human psychology makes the readers understand exactly what the character is going through. That's what makes it way easier to discover the characters' reasons, hesitations, dilemmas, joy, anxiety, happiness, and all sorts of emotions. We somehow get attached to the characters without consciously knowing it and start to fascinate them most realistically.

Accurate Representation of the Indian Society

Bond's literary works serve a great purpose of expressing the social, economic, and political issues concerning the public and the country at large. He conveys the different opinions of the differently brought up characters in society in the most effective way. The state of India when it was under British rule, the bloodshed during partition, the ruins made by corruption, the conservative approach of the society, the superstitions, and the prevailing problems of dowry and child marriage - all have become an integral part of his writings. That's why his stories are considered proofs that aptly documented the then Indian society comprehensively.

Ruskin Bond's excellence also prevails in enriching the native language, bringing forth ethos and culture, and portraying the existing complexity of the socio-political scenario. At the grass-root level, his stories present a great insight into the ongoing social stigma without being a complete rant about problems only. His characters depict juxtaposition by making readers experience the constant tension that goes on within themselves between their rural and old values and the new urban moral code that they are exposed to.

Although Ruskin Bond Books is majorly known as one of the best writers of children's books, his adult and adolescent novels deal with the aspects we all go through in adulthood. For example, his "The Room on the Roof" brings up issues faced by the protagonist Rusty that had never been the table talk back in the 1950s. The life of Rusty resonates with us because we all have witnessed the problems like identity formation, wanting financial independence, emerging sexuality at some point in our lives. On the other hand, "The Room on the Roof" and its sequel, "The Young Vagrants," also successfully bring out the pain and loneliness of the orphan protagonist while depicting the prevailing social concerns such as racial and cultural differences, narrow-mindedness, and the social pretensions.

A Master of Stealing Children's Hearts

Risking Bond's fantastic insight into child psychology has contributed to making him our most favorite writer. The most incredible element found in his children's books is that he shows immense respect to a child's emotions, a thing which is not openly discussed or even given much value to. He captures the innocence of children in the best possible way while providing the utmost importance to the adventures, the hidden complexity, tragedies, and determination of the little minds. The self-seeking attitude of children is beautifully painted in the subtle yet strong words of Bond. "The Blue Umbrella" and "The Angry River" are perhaps the most outstanding examples for showing the strength and abilities children inherit along with the intricacies of life- all presented with a mesmerizing touch of simplicity. Through these stories, Ruskin Bond successfully raises a very pertinent question on the conviction of getting attached to trivial materialistic things of life, which exposes the futility of the entire concept.

Ruskin Bond is a master of depicting the innocence and simple pleasures of children, which contrasts with the cunning, shrewd, and envious nature of the adults in his children's books. It inspires the readers worldwide to adhere to the old pleasure-seeking and joyful spirit we have left in the past. The children's stories highlight the lessons of sympathy, kindness, and brotherhood among the readers of every age.

That's why Bond's significant contribution lies in the fact that Bond's children's stories do not only evoke happiness in kids, but adults also perceive the same amount of gleeful experience while reading them.

Ruskin Bond's simple style of writing delves deep into our conscience. It is a potent weapon of his that beautifully depicts both the complexities and the ease of life. Bond never wants to "make readers toil and sweat" because he never believed in the concept of putting complex and unconventional words to sound more serious. In "It's a Wonderful Life," he shared why he always chooses to write simply. He also shared his views on social media regarding his writing style by saying, "I have always tried to achieve proses that are simple and conversational. Those who think this is easy should try it for themselves." It is always astonishing to see how the subject matters of Bond's writings are given such high importance without presenting them in a twisted form by using complex words. That's why his stories can be read repeatedly regardless of the reader's age, as the Ruskin Bond Stories have something interesting to offer you each time you turn the pages.