Globally, there has been an increasing shortage of talent for employers who have been struggling to find the right quality of skills in their own countries. For example, just in the European Union countries, according to the European Commission, 40% of European employers have difficulties finding people with the skills they need to grow and innovate. Around 13 million new jobs have been created since 2014, but many vacancies are left unfilled. Two key reasons for this trend are a mismatch of skills available vs. needed, as well as an ageing and shrinking population in Europe.

Many domestic policies are in place and constant efforts are made by Governments to manage for these labour shortages. Businesses have been providing large incentives to hire international talent – from higher salaries, to increased perks and benefits.

But now with COVID resulting in travel restrictions globally and countries like the United States of America suspending work visas, what is the future for businesses who want to hire foreign talent to scale and grow?In my view, there are two parts to this answer.

One, the nature of businesses and the type of people they will look to hire will change. A recent McKinsey Report estimates that post COVID (as the economies slowly begin to open up) up to 59 million European jobs, or 26 percent of the total, are at risk in the short term through reductions in hours or pay, temporary furloughs, or permanent layoffs. See attached picture. 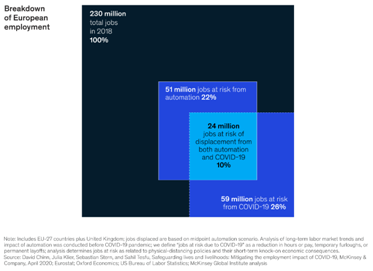 The jobs most at risk due to COVID overlap (somewhat) with those most vulnerable to displacement through automation. About half of these will be in three sectors: customer service and sales, food services, and building occupations. Professionals who will potentially be in highest demand will be those in STEM related sectors (Science, Technology, Engineering and Mathematics; this sector is expected to grow by more than 20 percent in the coming decade), healthcare professionals (including doctors, nurses, health aides etc.), creatives and those in arts management, and finally those in the education and training sector.

Second, countries who have traditionally depended on hiring international talent to grow their economies will continue to push policies which bring foreign skilled workers in, despite growing unemployment domestically. Take Canada’s example.

Immigration has powered Canada’s economic engine, driving up gross domestic product in the largest cities at a faster rate than the national average. Canada in 2019 grew by about 580,000 people, roughly 1.6 per cent, and 80 per cent of that growth occurred through immigration, helping to offset the country’s naturally aging demographic.

Although unemployment is surging, currently at 13.7 per cent,given the country’s aging demographics, the number of jobs in the long term will exceed supply unless there is immigration.The Federal government is even offering $1,500 to help offset the cost of a required two-week quarantine for some international workers (in the critical agriculture and food production sector).

So, broadly, post COVID, demand for international talent and hiring foreign workers will not reduce -the industries may change and the type of job roles may change. The fact that most highly developed countries have ageing populations and a domestic skill mismatch will ensure that governments open borders soon (post vaccine possibly) and skilled talent can operate on a global platform, again.

Once travel restrictions are lifted, these businesses and countries will require help in sourcing for this talent shortage especially where a large proportion needs to be fulfilled from skilled labour surplus countries, like India, supported by manpower companies. Magic Billion stands ready to support employers in this search as we have been for employers in over 10 countries, across multiple job roles – from recruitments of software engineers to nurses to those in the manufacturing and construction sectors.